You can’t miss the vase when you walk into the living room of Bruce Hamilton and his wife, Christy. It sits prominently on a credenza in their Jacksonville Beach, Florida, home, next to a photo album from Bruce and Christy’s 2017 wedding. Less than a year old, the vase has already become a family heirloom, a memento from their vow renewal on their fifth anniversary at Sandals Negril. But it isn’t the vase itself that makes them reminisce. It’s the blue and pink sand inside, which serves as a constant reminder of the people who poured it on that day. 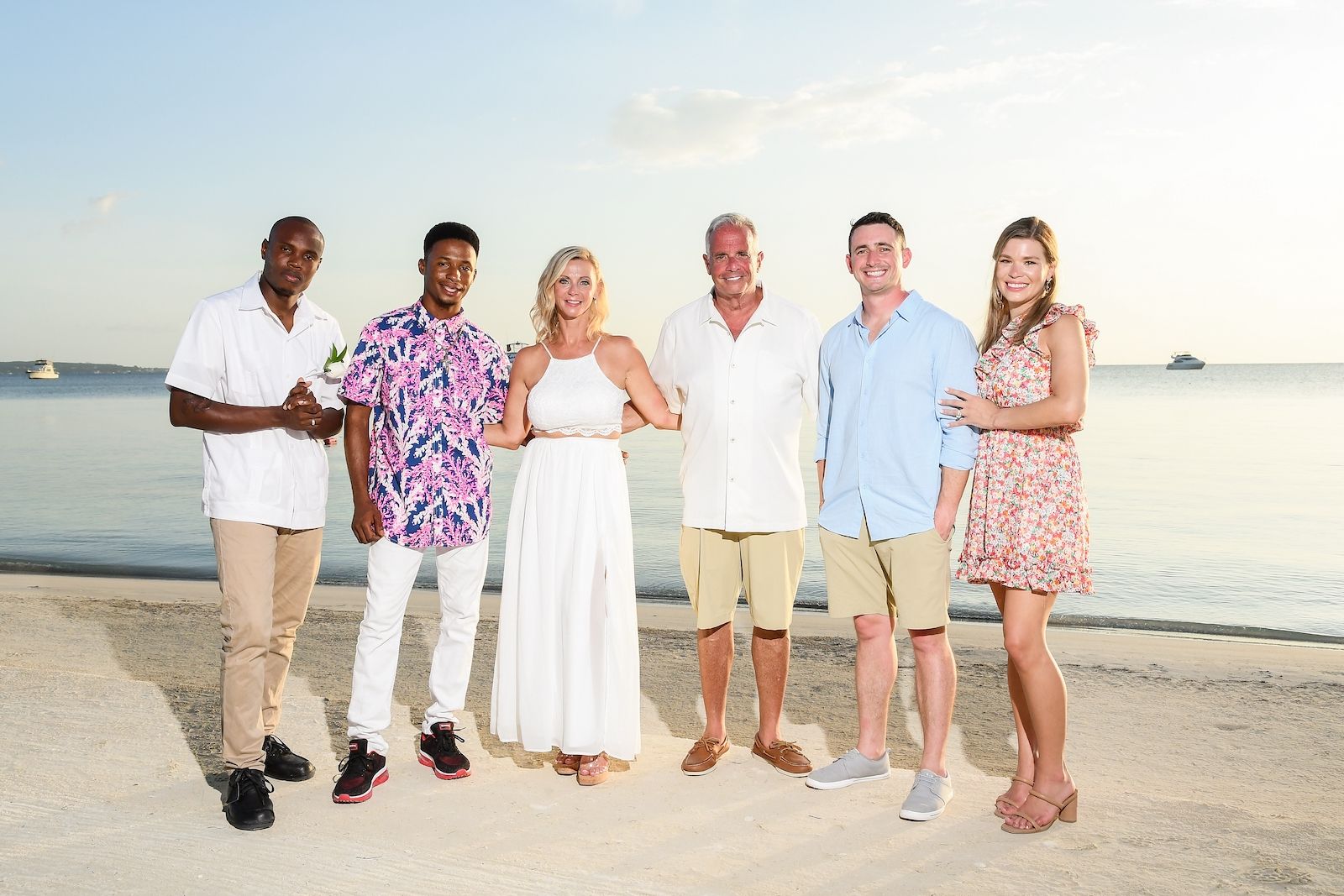 Photo: The Hamiltons and part of their Sandals family, Jeffrey and O'Neal, at Sandals Negril.

“The sand represents a blending of our families,” Bruce says, “but it isn’t the kind of blended family that immediately pops into your mind.”

There are other daily reminders of these people they call family, like the ever-growing text threads on Bruce’s phone.

“Good morning, my brother from another mother. It’s going to be another beautiful day.” It’s from Christopher, a butler at Sandals Negril.

Bruce’s response: “Wish we could get together for our afternoon chat later. I miss that.”

Christopher: “The days are counting down. Whoop, whoop. That’s what genuine family is all about.”

The texts and the vase make Bruce and Christy feel like they never completely leave Sandals Negril between their annual trips, which have become tradition since their first anniversary. 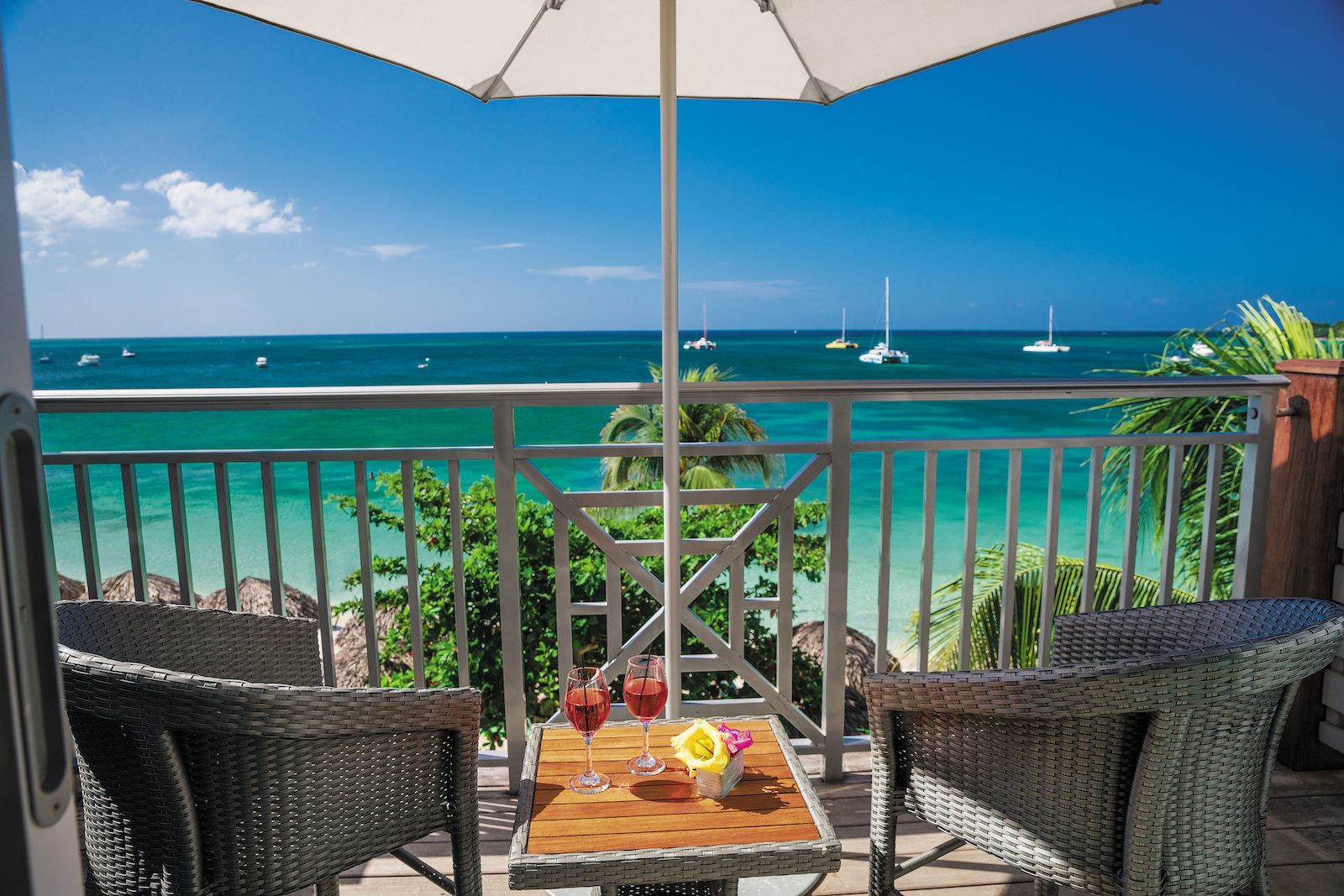 “Before that first trip, we thought we’d go down to Sandals and relax on hammocks over the ocean, look at the starfish, and have a few drinks on a balcony with some umbrellas in them. Then we’d keep exploring the world a year later. That’s all we expected.”

But then, the unexpected happened.

“The resort itself was above and beyond — the food, the room, the scenery, the relaxing vibe,” Bruce says. “But the staff really got to us. We had no idea they’d become such close friends and, dare I say, family.”

It started 30 minutes after they arrived in September 2018. Bruce and Christy went to their suite and the butlers introduced themselves as Kenrick and Christopher. The conversation about dinner reservations and fresh coffee in the morning turned to their kids and personal interests. While the bathrobes and ocean view made Bruce and Christy feel freer than they’d ever felt, one thing made them uncomfortable: asking Kenrick and Christopher to wait on them. 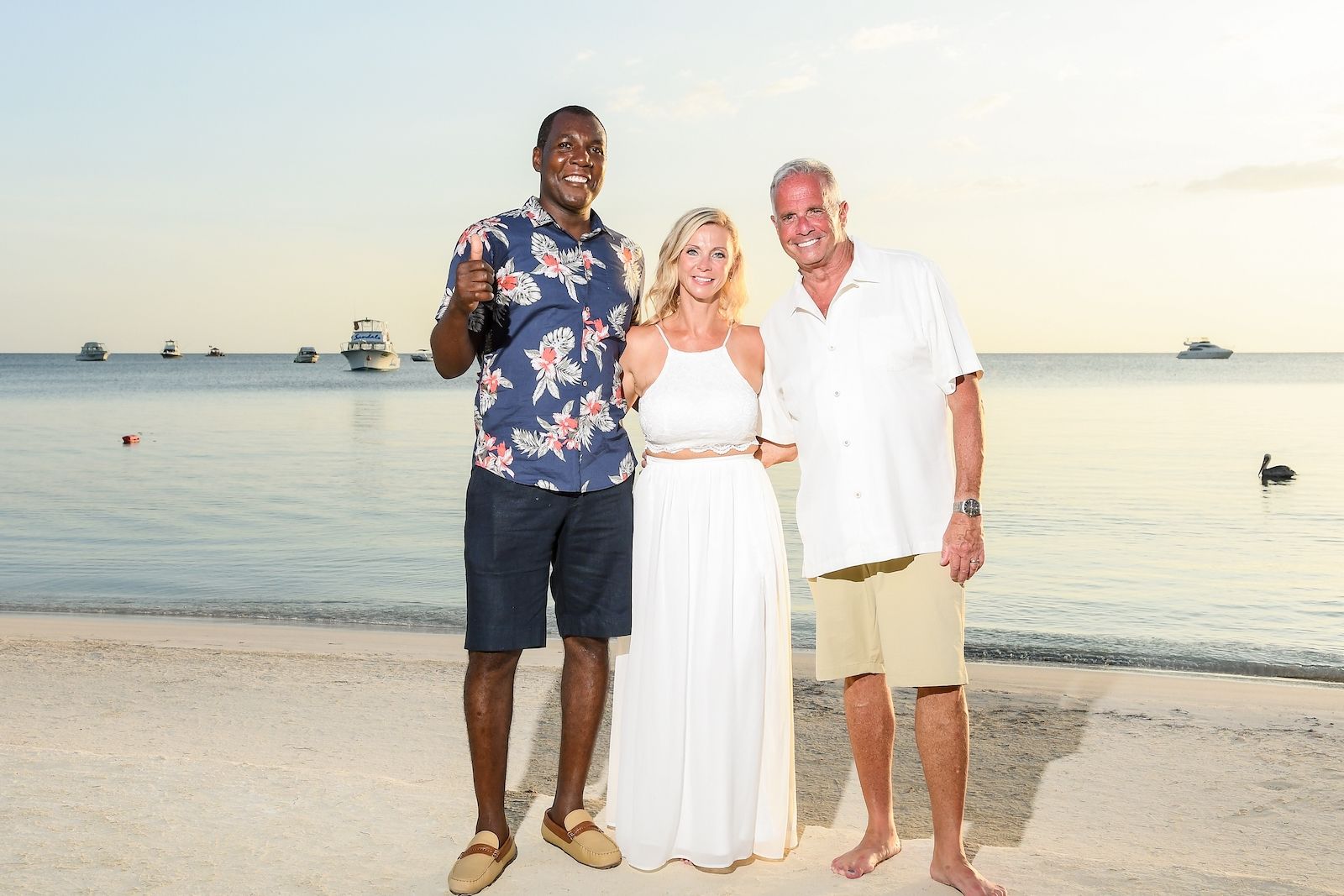 Photo: Sandals Butler Christopher along with Christy and Bruce Hamilton at Sandals Negril.

“Relax, this is who we are,” Christopher said. “We enjoy making people happy. We really do.”

Bruce thought about that a little while later when Christopher walked them to dinner at Sundowner Restaurant.

“Actually, yes! Sit down at our table, I’m going to serve the wine for a change!"

The butler team had fielded countless requests over the years — bottles of Yoo-hoo in the fridge and haircuts from personal barbers — but never anything like this. In true butler spirit, Christopher jokingly gave Brue his jacket and gloves, sat down, and watched Bruce pour wine.

Bruce has a photo of the moment on his phone.

“Christy and I still talk about that night. We all loosened up. From that point on, we could just be goofy, fun-loving selves.”

Bruce and Christy did use the hammocks and they did sip tropical drinks almost as rich in color as the Caribbean Sea. 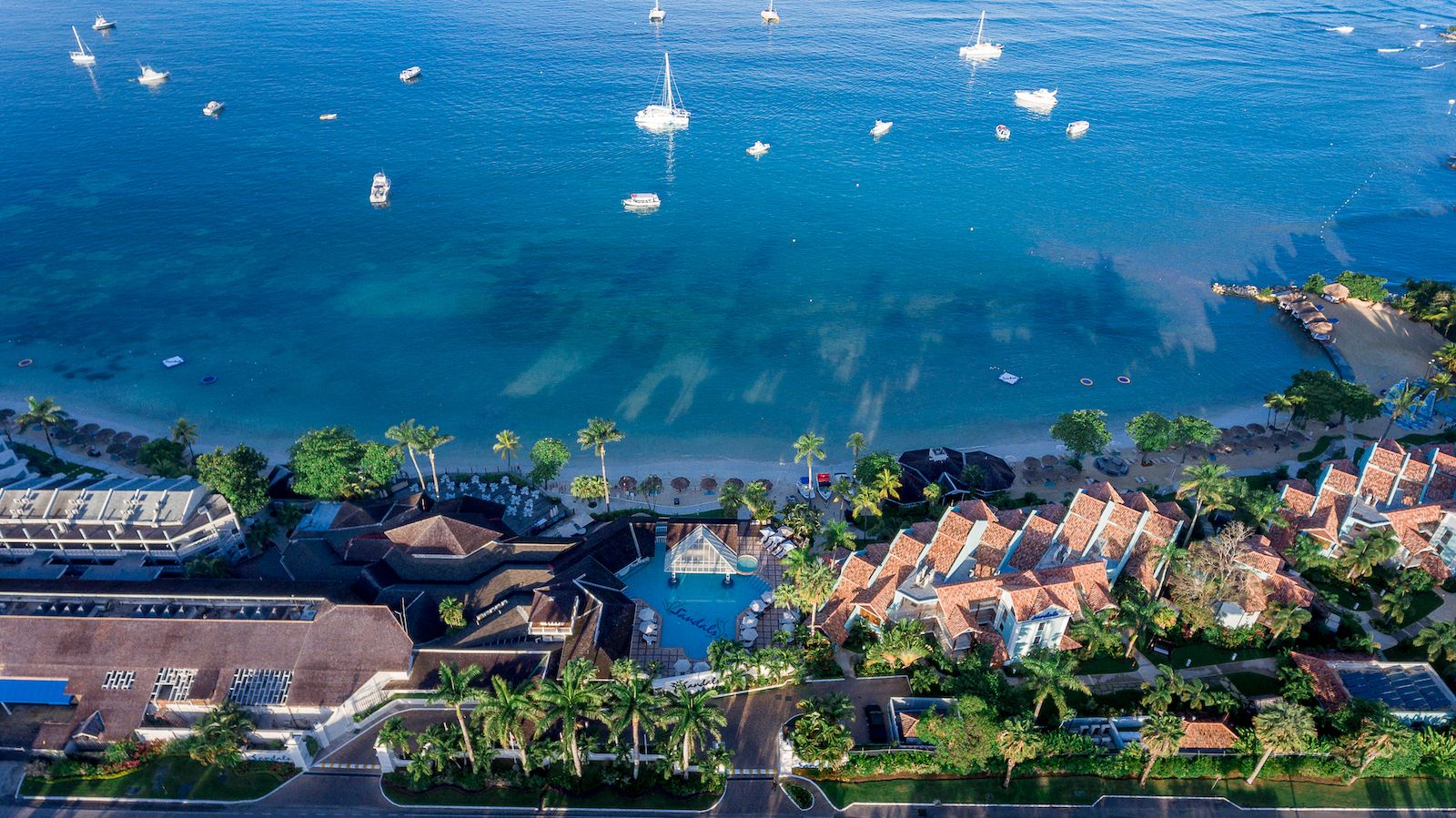 They went paddle boarding and snorkeling, too. The most unforgettable moments, however, were their conversations about life with a growing list of Sandals friends: Christopher, Kenrick, Orlando, Devon, Marielle, O’Neal, and Jeffrey, a photographer who they began to call their Jamaican son.

On the last evening of the trip, Bruce and Christy sat at a beach bar next to a pool table. They remember it as if it were 12 hours ago: easy, breezy, and starry. The kind of night where you wish you had a pause button, so the trip will never end. Jeffrey walked over to them, started to say something, and couldn’t get the words out. Instead, he stood at the pool table and used the balls on it to form a heart. 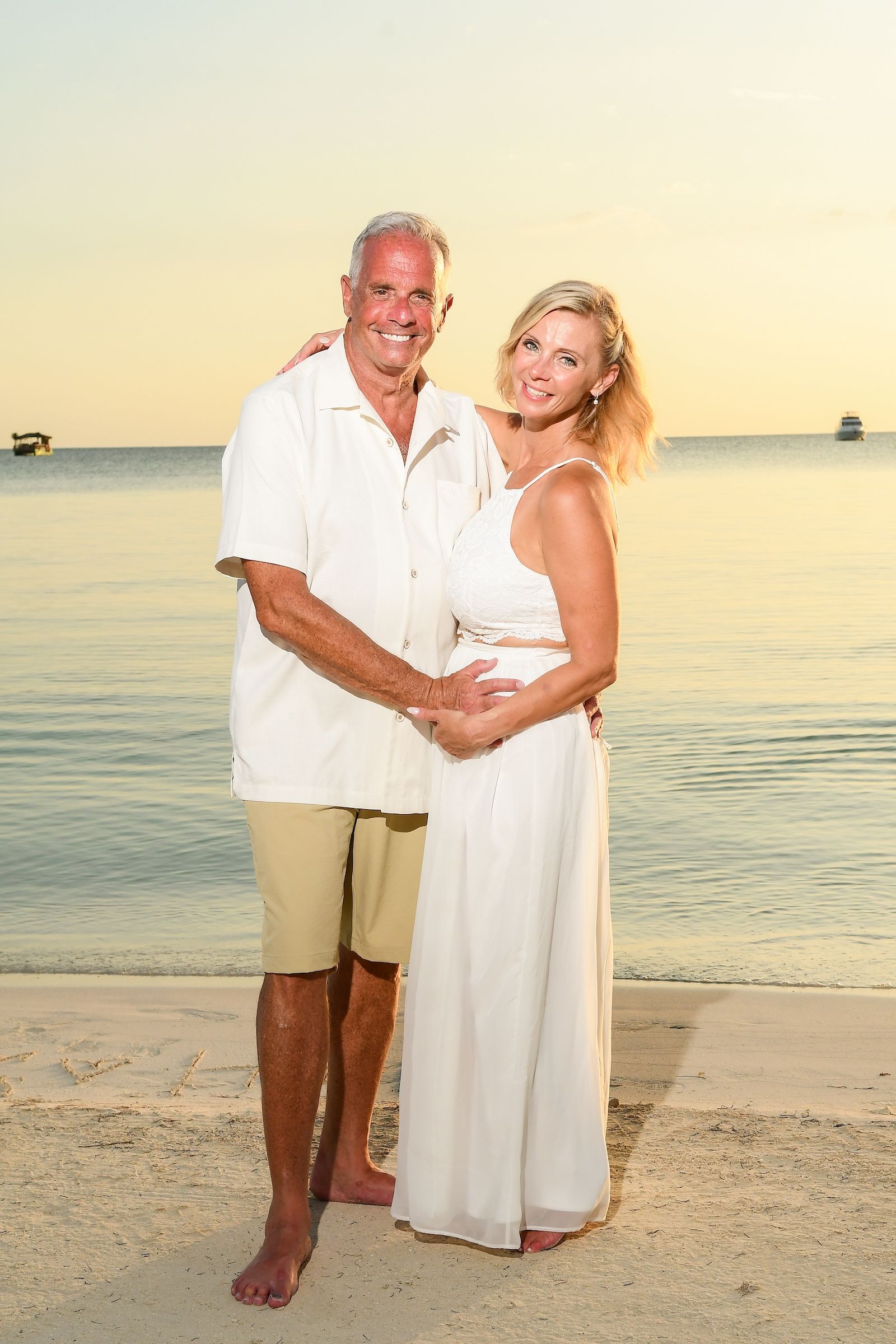 Not goodbye. Not by a longshot.

Bruce and Christy would not go on to explore the world after all. Sandals Negril had instantly become their home away from home. In the fall of 2019, a year after not saying goodbye, they came back for Bruce’s birthday and their third anniversary. For the 358 days in between, they’d exchanged texts with Kenrick and his wife, Laverne. Christopher would send pictures of the ocean and report-card updates for his son, Javier.

Most of the resort team didn’t know Bruce and Christy were returning, of course. They’d seen thousands of guests during the previous 12 months. That’s why it came as such a shock when a restaurant hostess looked up and yelled, “Oh my gosh! Christy! You’re back!” Down on the beach, Devon’s jaw went slack when he saw them grabbing paddleboards.

“Bruce? Christy? I didn’t know you were coming!”

They shared long hugs with Kenrick, Jeffrey, and Christopher, who pulled out his phone and showed them his all-time favorite picture: Bruce wearing the butler jacket and white gloves, serving wine. 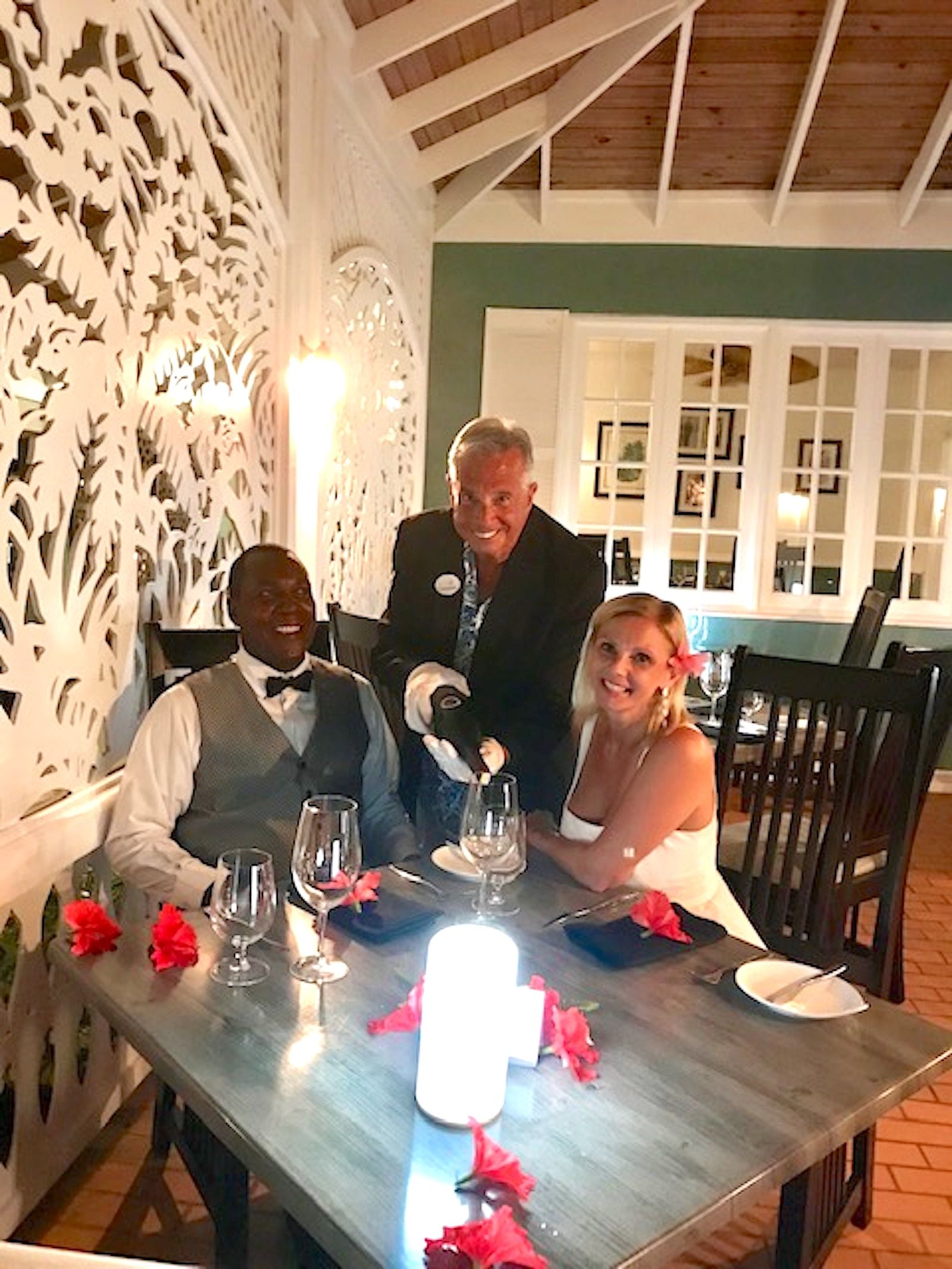 “There’s nothing special about us,” Bruce says. “We’re all genuinely interested in each other as people. I guess we just fit in, like family.”

It made perfect sense, then, to have a Retie the Knot ceremony on their fifth anniversary at their Jamaican home, with their Jamaican family. A wedding planner at Sandals Negril organized everything — appetizers, drinks, flowers, dinner, right down to the aisle and the arch on the beach. Bruce and Christy knew how they wanted to close their vows: with a sand ceremony to commemorate two people coming together as one.

Theirs would be different from what anyone at Sandals had ever experienced.

On the day they retied the knot, Bruce and Christy didn’t stress or so much as fidget. They relaxed in the shade of a beach cabana. They chatted with their Sandals family. And they allowed the blue hues of the sea to lull them into semi-consciousness.

“Does anyone want some champagne?” 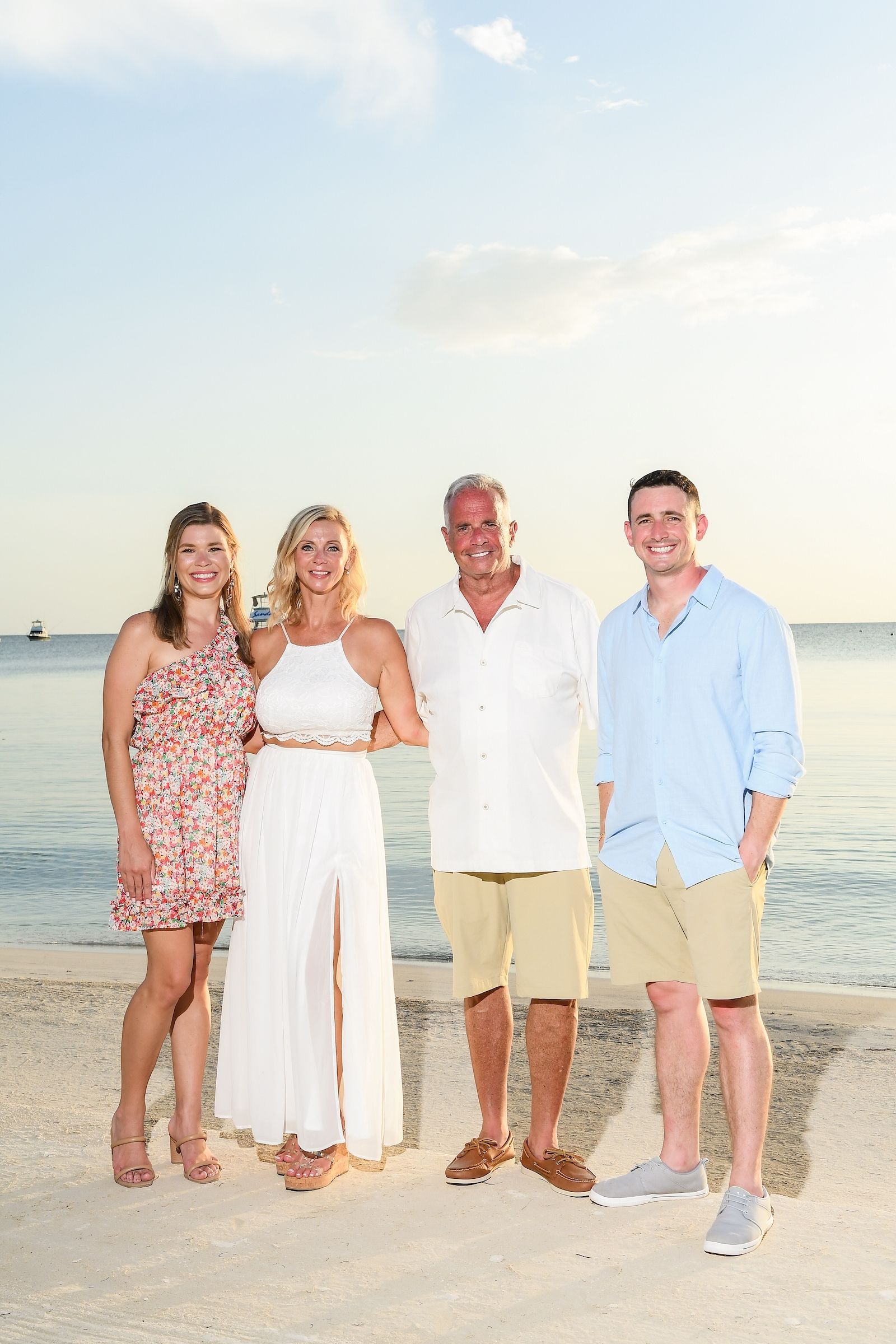 Christy raised her eyes to see Bruce’s son, Greg, and Greg’s wife, Shea, standing there with a bottle. And she said a phrase, full of surprise and thrill, that seemed to echo throughout the property all week. 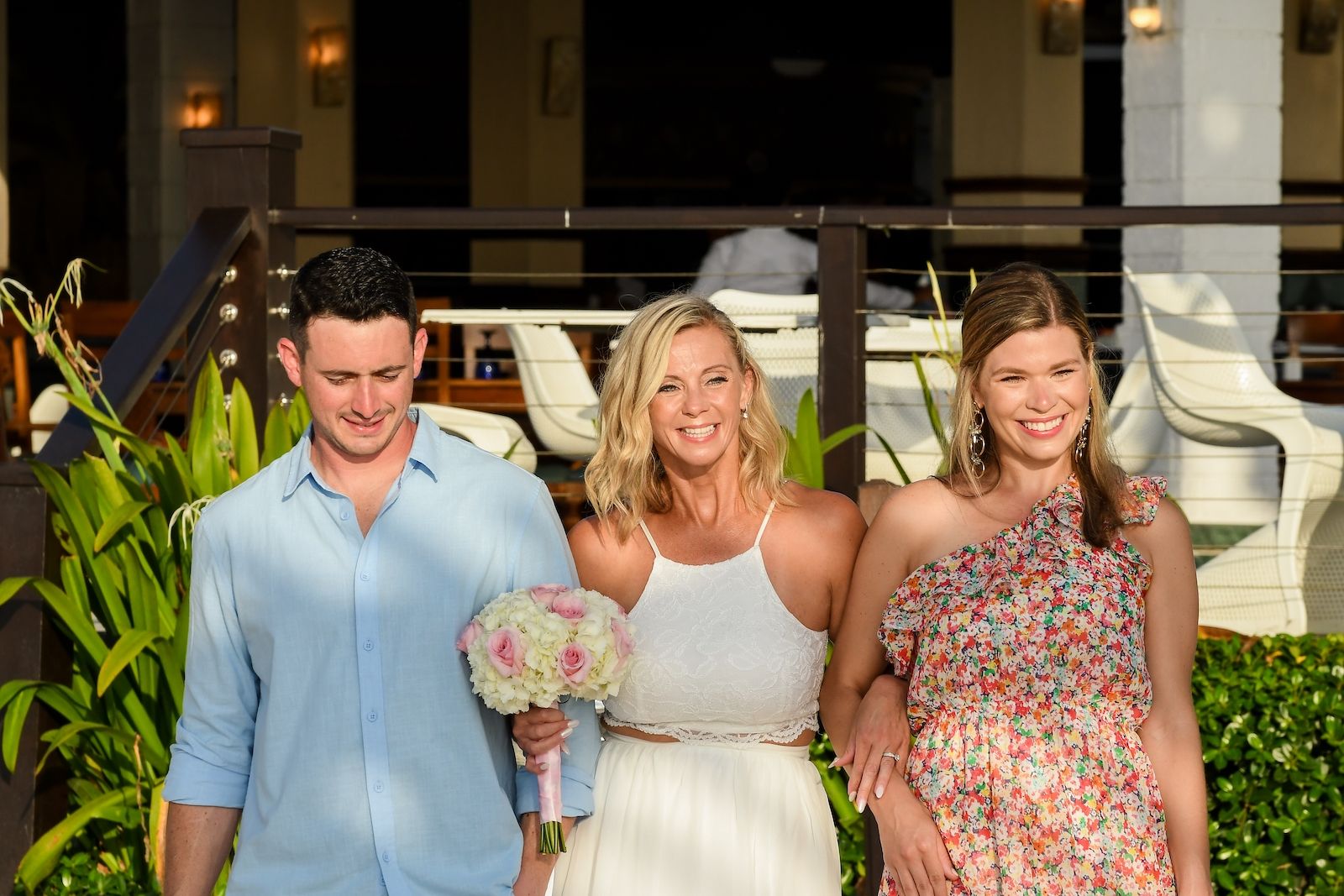 Bruce had asked Greg and Shea to represent family members from the U.S. at the ceremony. They’d heard a lot about Sandals Negril every time Bruce and Christy returned home from a trip. Mostly, they heard about the staff that had become more than staff. They saw pictures of Christopher, Kenrick, and his wife, Laverne. They watched Bruce laugh while exchanging texts with Jeffrey. 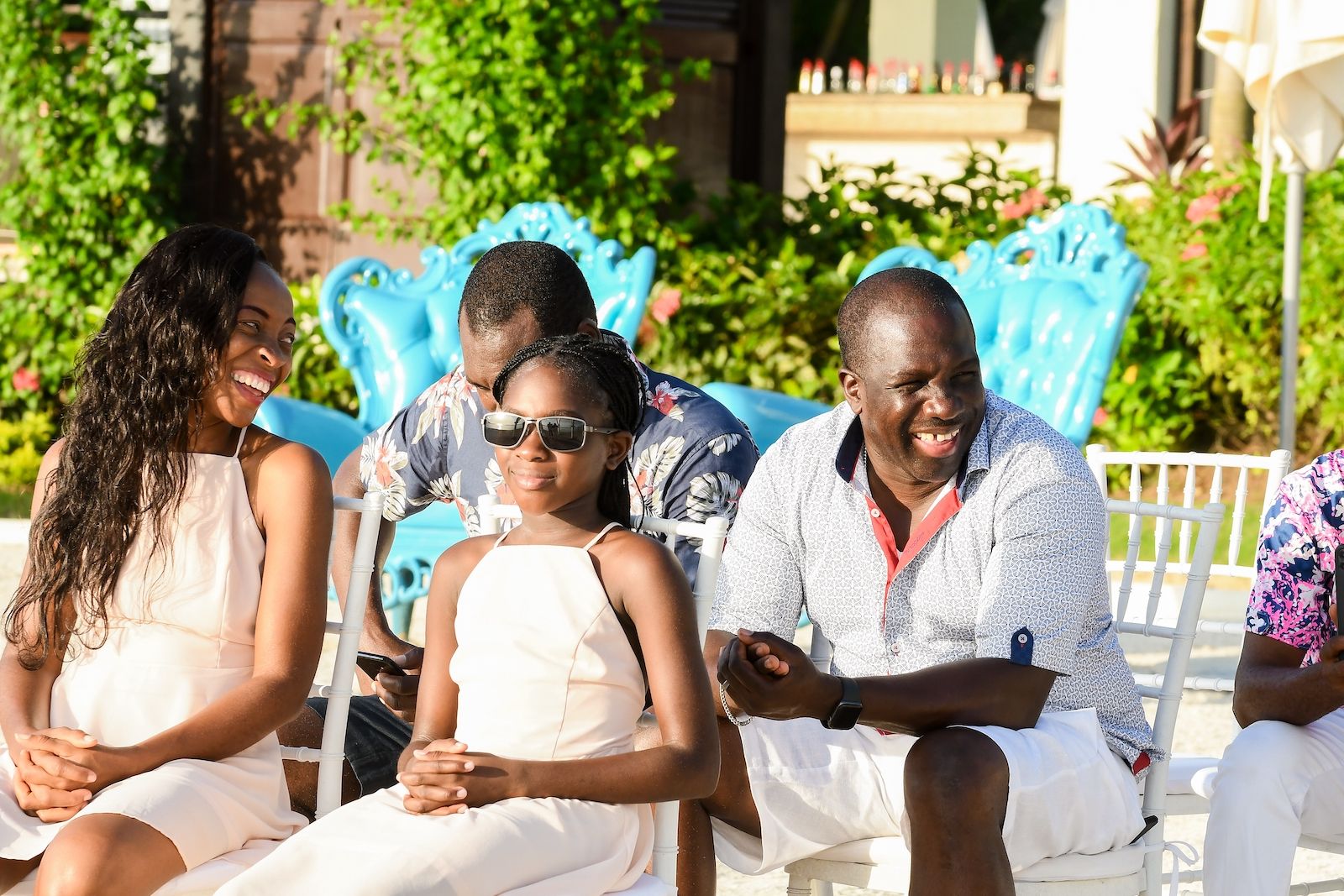 Photo: A few members of the Hamilton's Sandals family - Laverne, Kendrick and Kendra - at their vow renweal ceremony.

“We knew they must be special people,” says Greg, “but we had no idea how special until we were there to see for ourselves.”

The wedding procession made a profound statement on the beach. Greg and Shea walked forward, followed by a long stream of Sandals staff members, with their spouses and children. When it came time for the sand ceremony, everyone was invited to be part of the special moment.

Photo: Bruce and Christy's Sandals Negril 'family,' from their old Sandals neighbors to the General Manager to the Hamilton's butlers and their children.

“I’ve never seen it done the way Bruce and Christy would like it done,” said the minister. “But this is how they want it, so this is how we will do it.”

Bruce poured some blue sand into the vase.
Christy poured in pink sand. 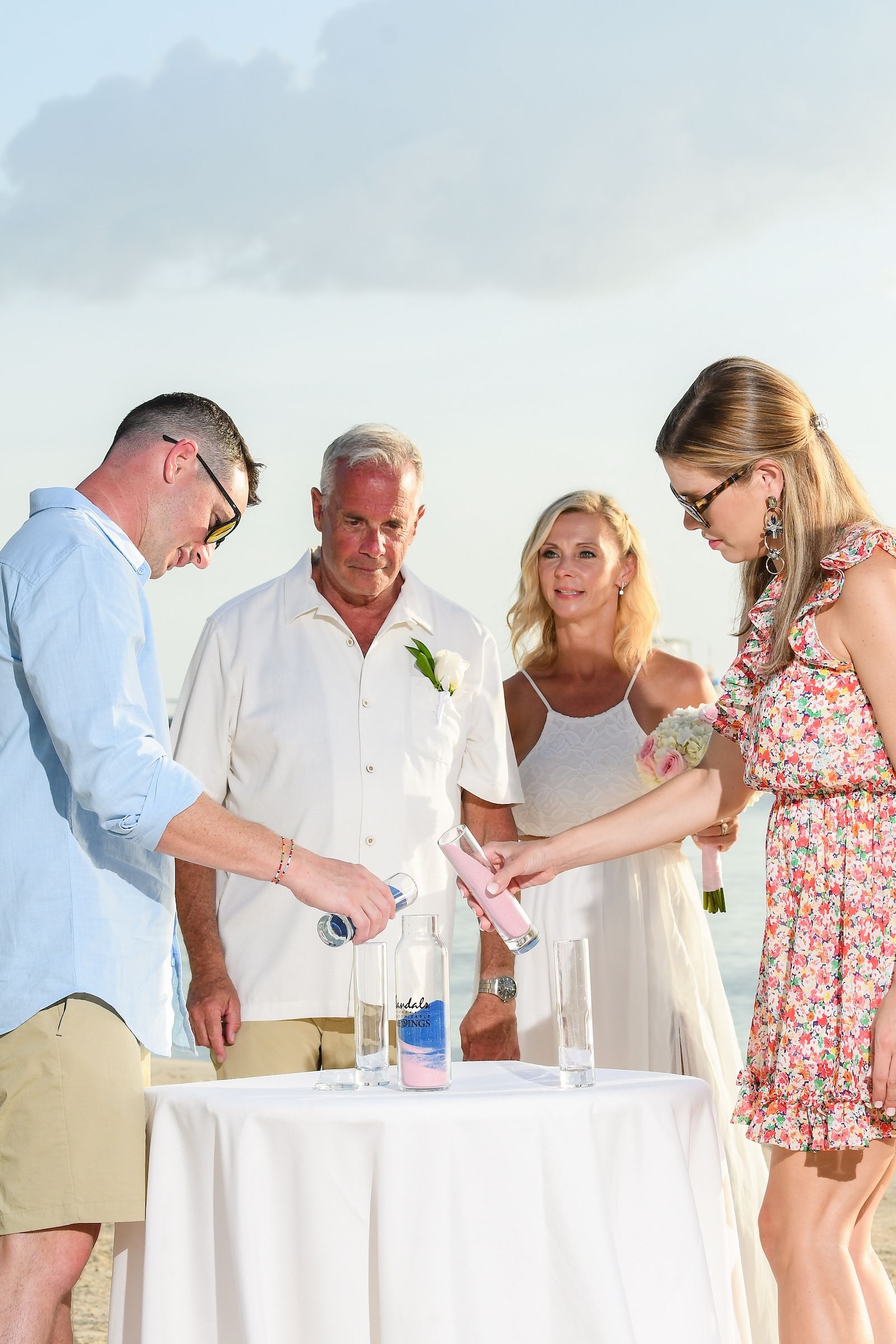 Next, Greg and Shea sprinkled in their share of blue. Then came Kenrick, Laverne, and their daughter, Kendra, and Orlando, Christopher, O’Neal, Jeffrey, General Manager David Latchimy, and a host of happy Sandals family members.

But they weren’t the only ones there to celebrate Bruce and Christy’s forever love.

To their surprise, Bruce and Christy’s old neighbors Rick and Karen Seiler from their first trip to Sandals Negril in 2018 joined them at the altar. Becoming such good friends over the years, they reunited for the ceremony and asked to perform the Hamilton’s nuptials. 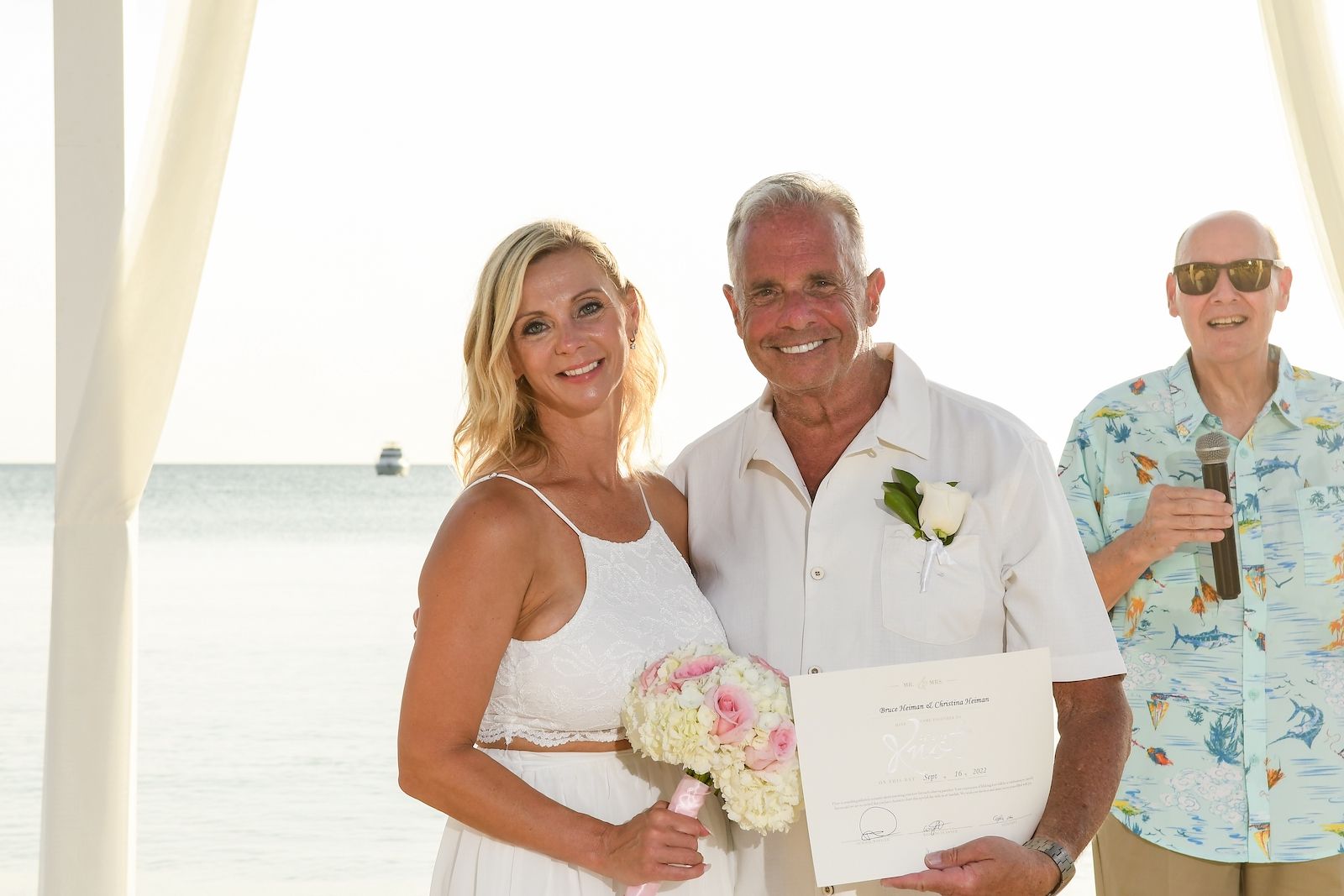 “You just can’t make this stuff up,” said Bruce. “From the ceremony to our Sandals family being part of our special day to the surprise details like Christopher and Kenrick arranging for our favorite local band that plays up and down Negril’s 7-mile beach to perform at our reception … I mean, the type of love and memories we share here will be in our hearts forever.” 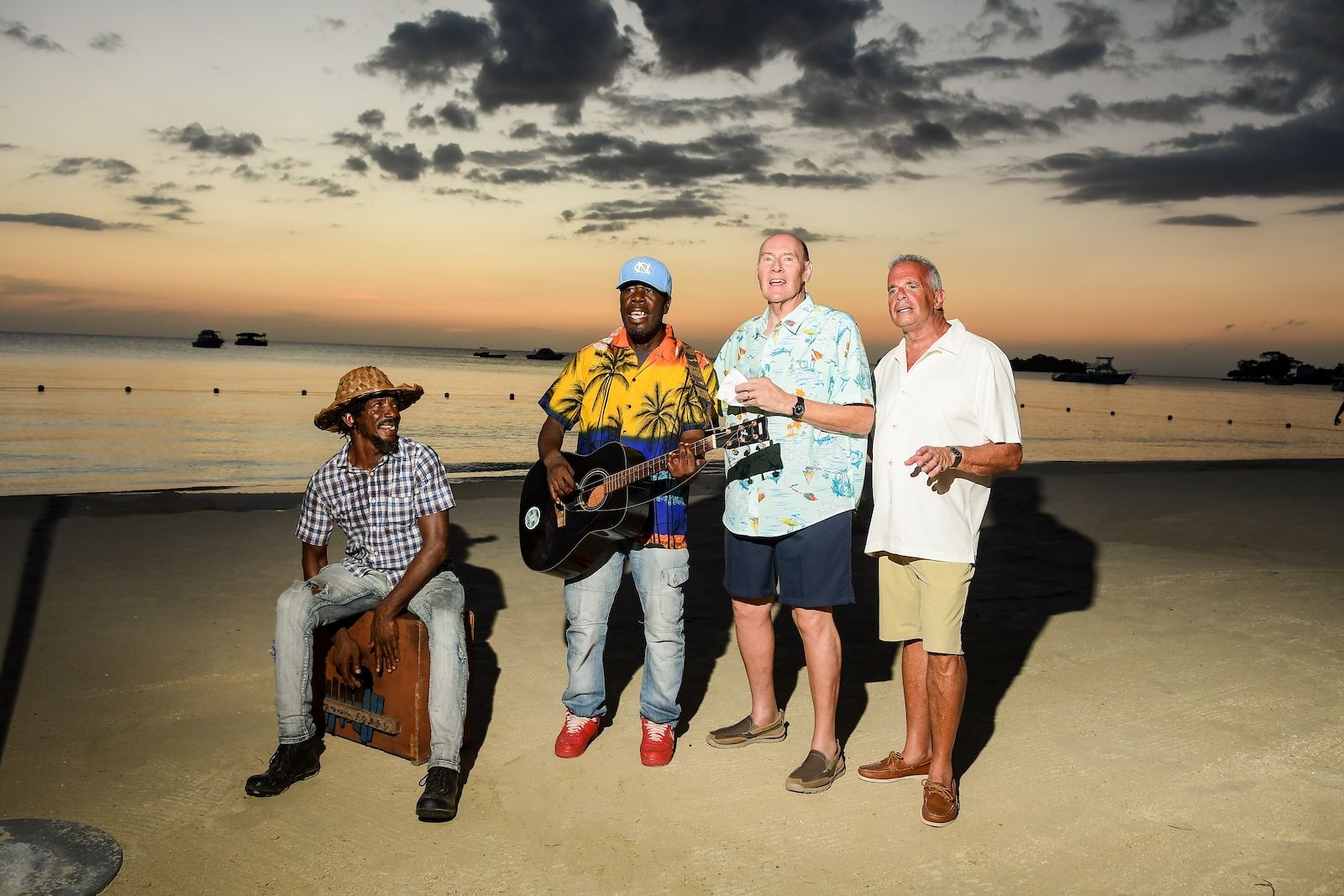 On that day, the vase they filled turned into a radiant blend of color and character, of husband and wife, of joy and gratitude, of memories, and of family.

On the credenza in their living room, the sand also represents a blending of homes.

“We look at it every day,” Bruce says. “And that means they never have to say goodbye.”

Meet The Dive King of the Caribbean

He’s Michael Clarke, Corporate Director of Watersports and The Man Who Has Led Over 140,000 Divers to Get Certified and Discover the Depths of the Caribbean Sea. Believe Michael Clarke when he says he has the best job in the world…

The First Couple Ever Married at Sandals Resorts

The first couple ever married at Sandals Montego Bay in 1981 made their way back to renew their vows after a health challenge proved that through sickness and in health, love is all you need. When Gordon “Butch” Stewart built the…

Meet The Dive King of the Caribbean

He’s Michael Clarke, Corporate Director of Watersports and The Man Who Has Led Over 140,000 Divers to Get Certified and Discover the Depths of the Caribbean Sea. Believe Michael Clarke when he says he has the best job in the world…

The First Couple Ever Married at Sandals Resorts

The first couple ever married at Sandals Montego Bay in 1981 made their way back to renew their vows after a health challenge proved that through sickness and in health, love is all you need. When Gordon “Butch” Stewart built the…