Her name is Sandy, and she’s become an international social-media darling this holiday season. Sandy grew up playing on the idyllic beach at Sandals Grande St. Lucian, turning guests into friends. But one couple developed such a special bond with Sandy that they decided to make their relationship permanent. 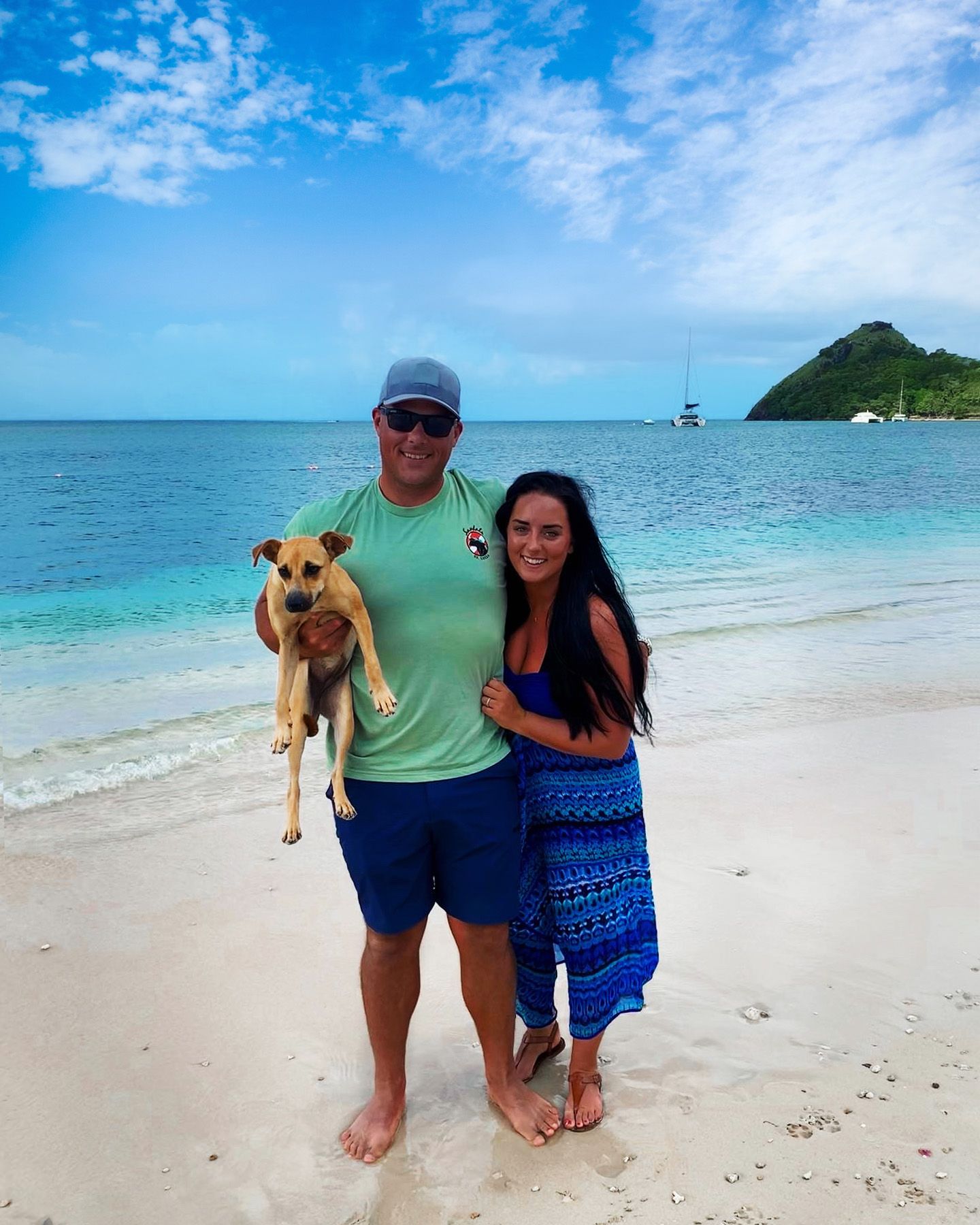 Melissa Ernst and Aaron Doubt needed to get away, badly. Away from the relentless cold of Pittsburgh and far away from the nonstop politics on every media channel. Earlier in 2020 they had to cancel their travel plans, once because of COVID restrictions and a second time because of the potential for crowds. They wanted to be away from all of that, too.

On a whim, Melissa booked a nine-day trip to Sandals Grande St. Lucian because of the island’s minimal COVID rates and nonexistent stress. 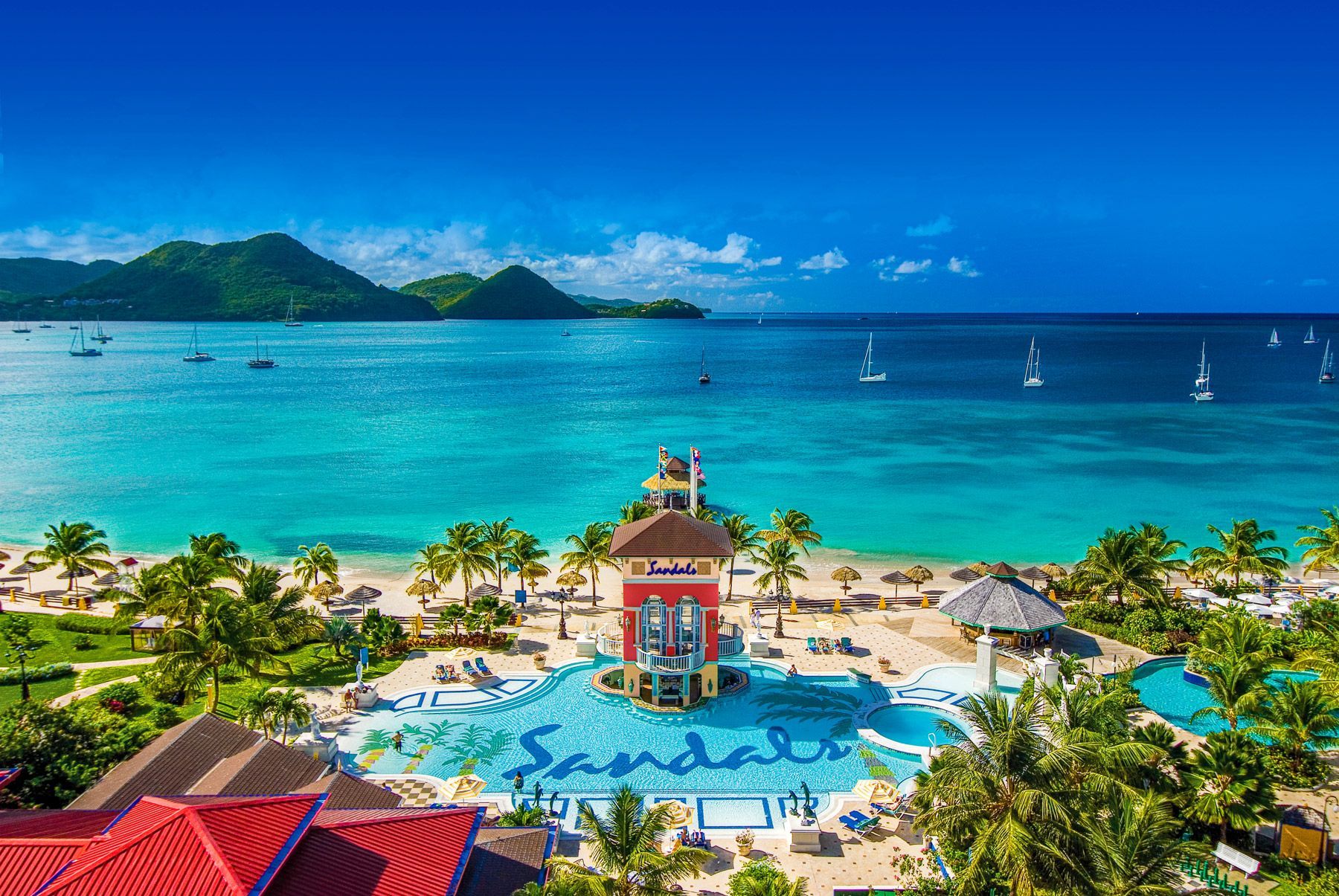 “We’d seen the pictures of Sandals,” says Melissa, “and wanted to see for ourselves if they were close to reality.”

They weren’t reality, they were even better. Melissa and Aaron splurged for a helicopter transfer from the airport to the resort. “From the air the island reminded us of those incredible scenes from Jurassic Park,” says Melissa. Upon arriving at Sandals, she took pictures and videos in an attempt to preserve the visual moments. “It’s impossible to do. The property, ocean and beach are beyond anything we anticipated.” 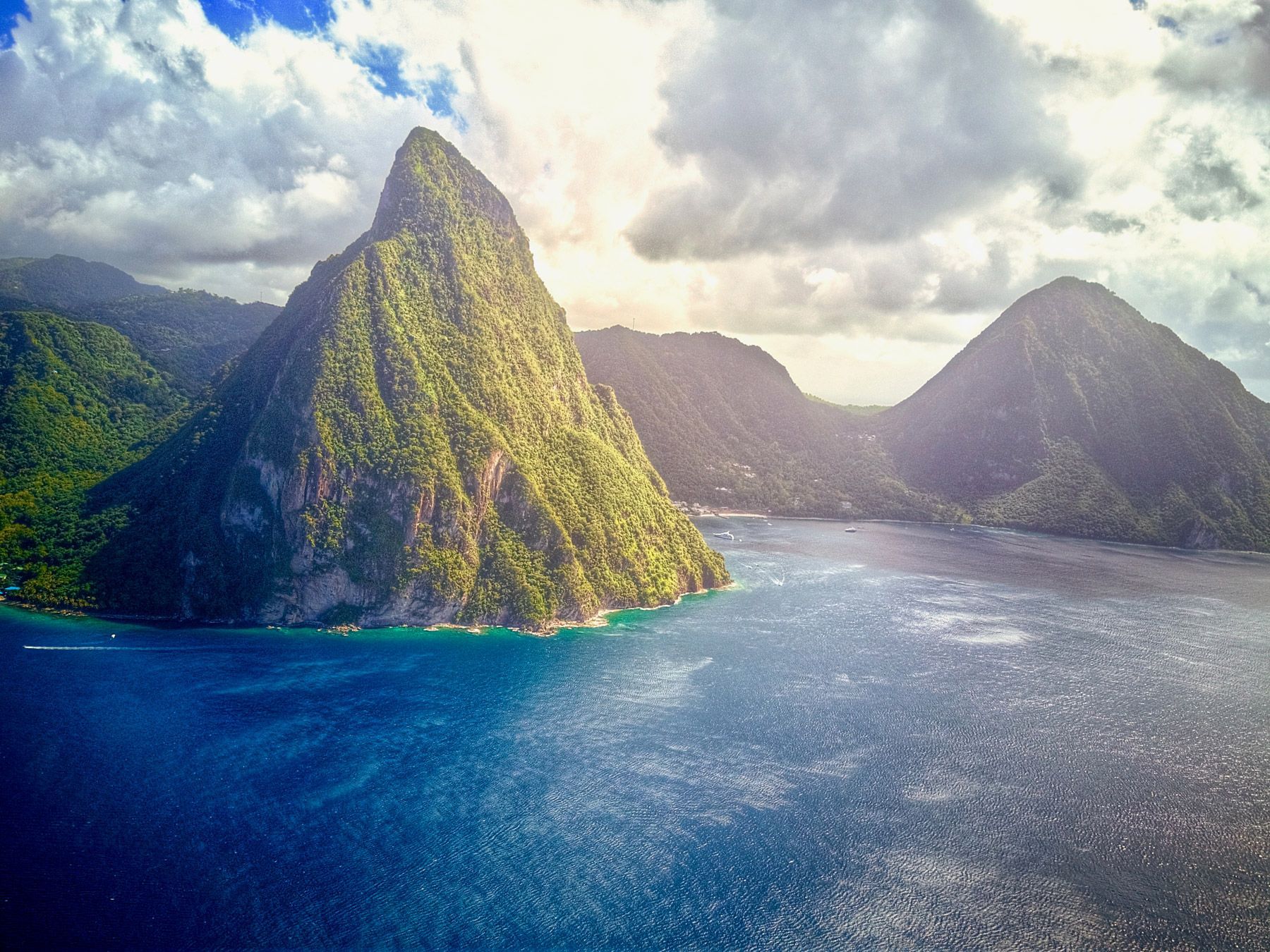 On their first full day, they woke to a view of the beyond-picture-perfect sea. After taking their time over a beachside breakfast, Aaron went out on a dive boat while Melissa participated in a scuba class to earn her certification. “Much better than doing it at the YMCA in Pittsburgh,” she says, “and it’s part of the all-inclusive experience, so why wouldn’t I do it in St. Lucia?”

The staff had them feeling more relaxed than they’d felt in months. “They are happy. It wasn’t just how they acted in front of us. They had the same attitude when they were with each other away from guests. How could you not be happy in such a beautiful place? Seeing that made it more enjoyable for us, too.”

Their cares? What cares? Those were 2,500 miles away. They did miss two things, however: Oden and Ares.

“Our German shepherd and pit bull,” says Melissa. “We’d never been away from them for more than a weekend.” 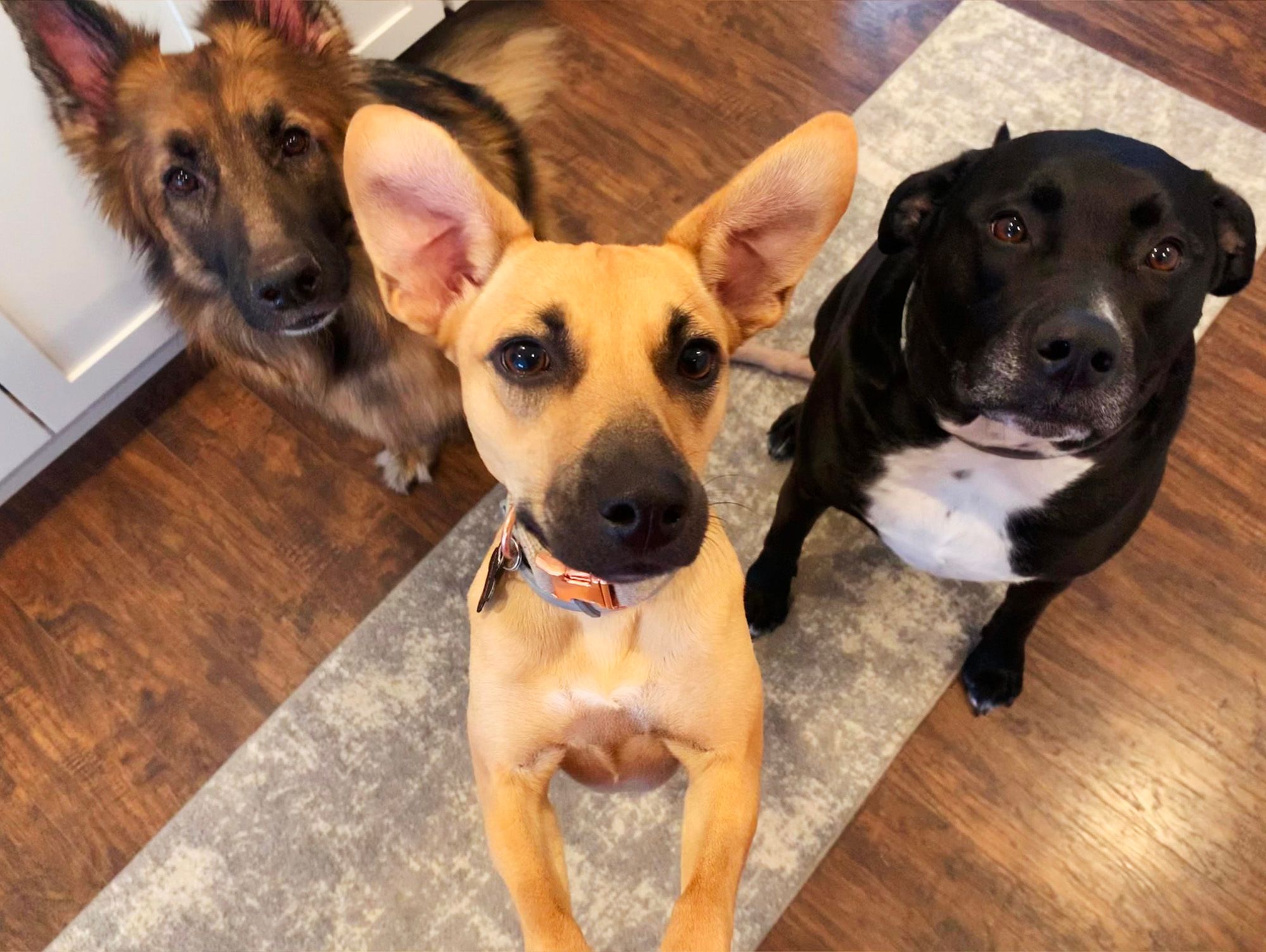 On that first full day at Sandals, an angel of sorts showed up on the beach: A little dog that the resort staff called “Sandy” came up to Aaron with eyes wide and her entire butt wagging. She looked as happy and friendly as you’d expect from a Caribbean pup. So, Aaron reached down and picked Sandy up to say hello. It might have been the first time her paws had been separated from the beach. At first she looked confused. And then Sandy did something that changed three lives: She licked Aaron’s face. 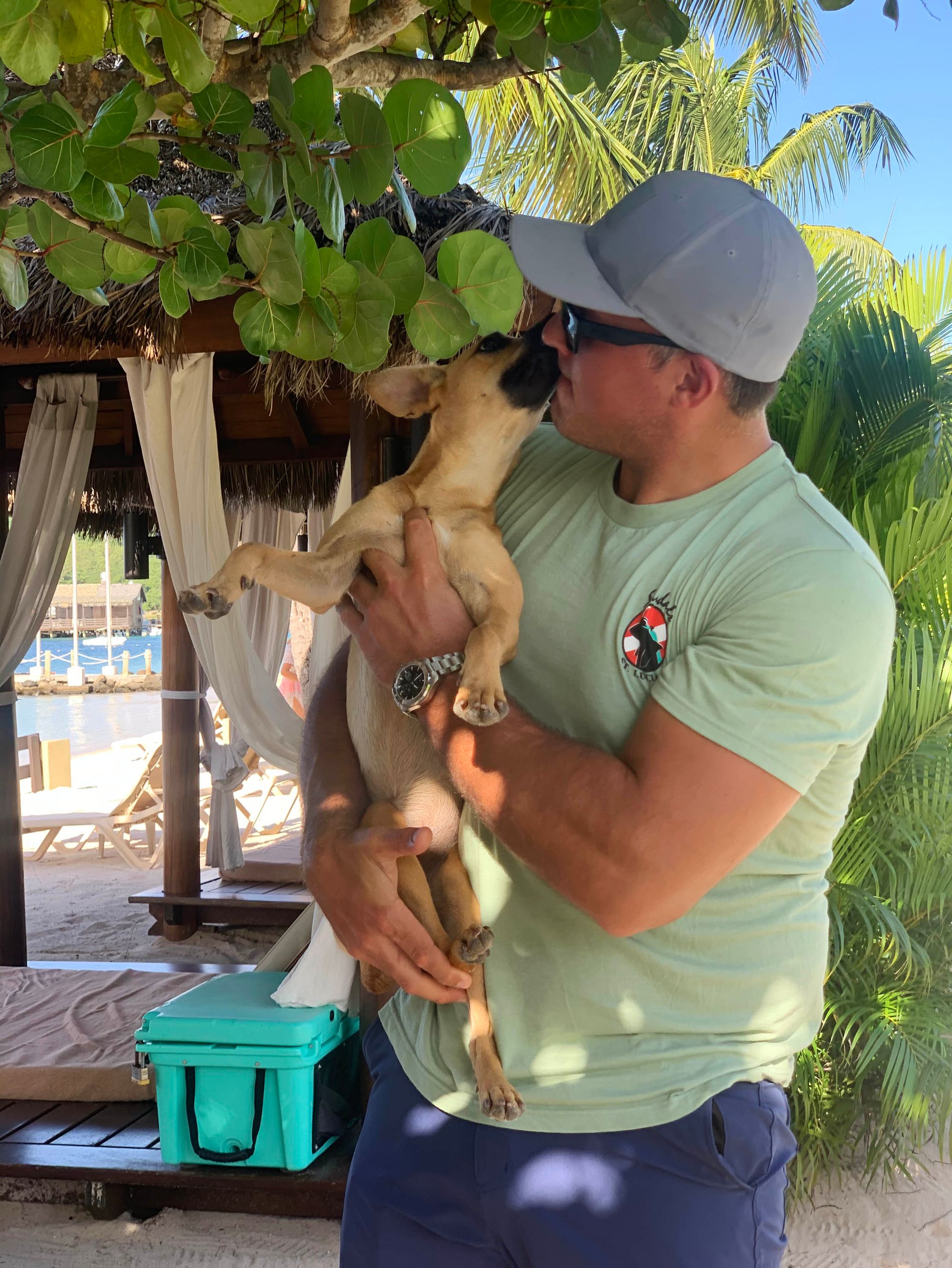 “She just melted into him,” says Melissa.

The three of them stayed attached for the next eight days. Every afternoon Sandy would sleep under Melissa and Aaron’s beach chairs. She helped Aaron dig for sand crabs and chase birds. When Melissa and Aaron came out of Gordon’s Steakhouse after dinner, Sandy would lead them on an evening beach stroll. When they had massages in a hidden garden, she would lay there and watch. When they returned from a catamaran cruise to the Pitons, she waited on the sand for a hug. And when they climbed onto a swinging bed, Sandy jumped up and cuddled with them until they were all asleep in the shade of palm trees.

In all of those moments, Sandy was instilling the carefree Caribbean into the fabric of Melissa and Aaron’s lives. The change was most obvious when Aaron accidentally took his phone on an 80-foot dive on their second day at Sandals. 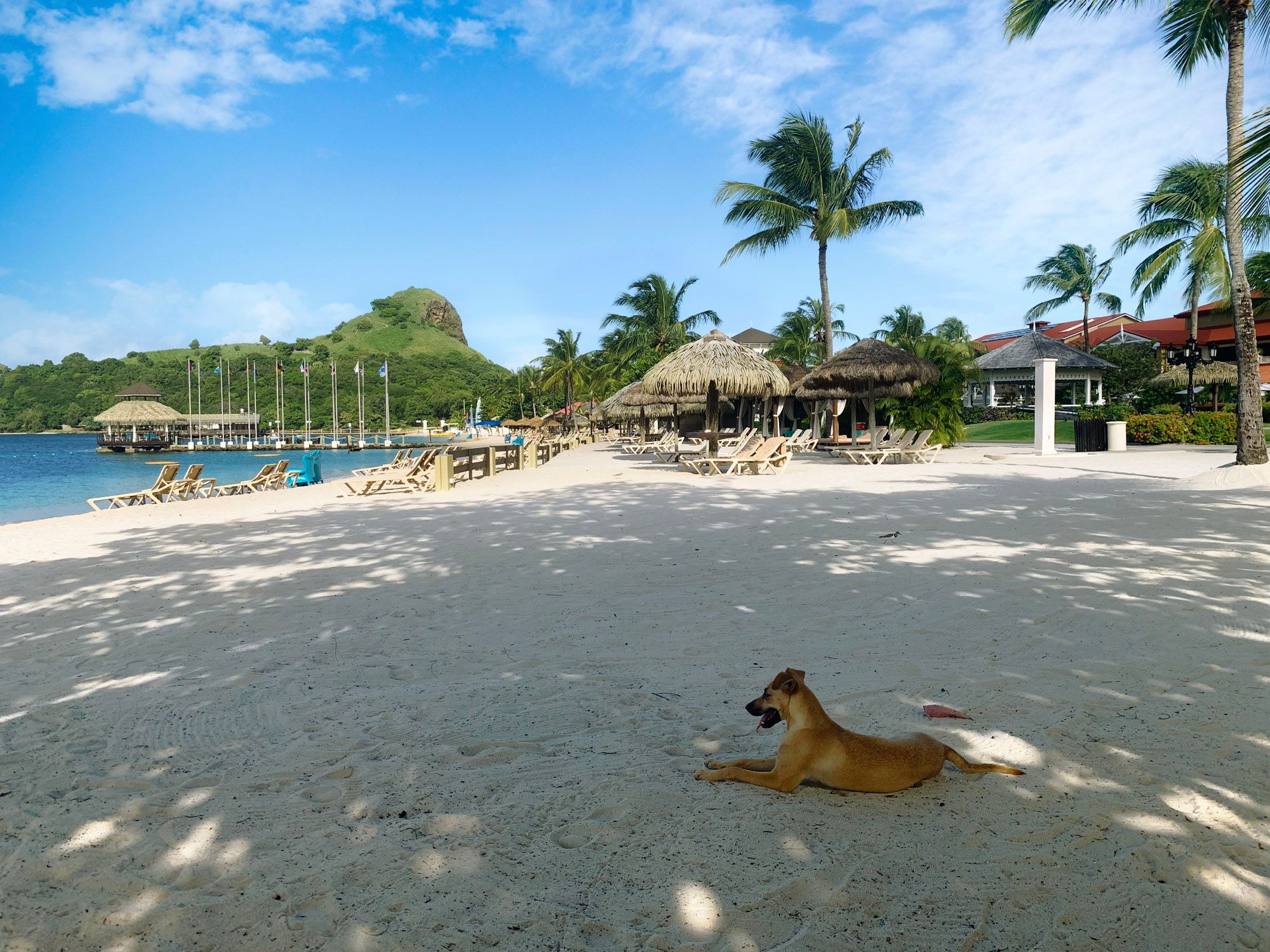 Image: Sandy catching some shade as she overlooks the calm ocean and lush landscape at Sandals Grande St. Lucian.

“He’s in real-estate development, so he’s always connected,” says Melissa. “I didn’t know how he’d react to being without his phone.”

For the next eight days, Aaron’s attention fixed on his surroundings and on his new canine friend. “I’ve never seen him so relaxed,” says Melissa. “The fact that losing his phone didn’t bother him is a testament to the resort, the staff, and to Sandy. It really was a week and a half in paradise.”

The only drawback to experiencing a few days in paradise is leaving it — and, in this case, leaving Sandy. So, Melissa and Aaron strategized a way to preserve both the Caribbean vibe and the relationship. The Sandals Foundation connected them to a local animal lover who helped them organize transporting Sandy to her new home. Together they worked with guest services at Sandals to arrange a way to unite Melissa, Aaron, and Sandy. A few weeks later, Sandy was delivered to the airport in St. Lucia, was given a dog’s version of a champagne and hors d’oeuvres sendoff, and flew away. 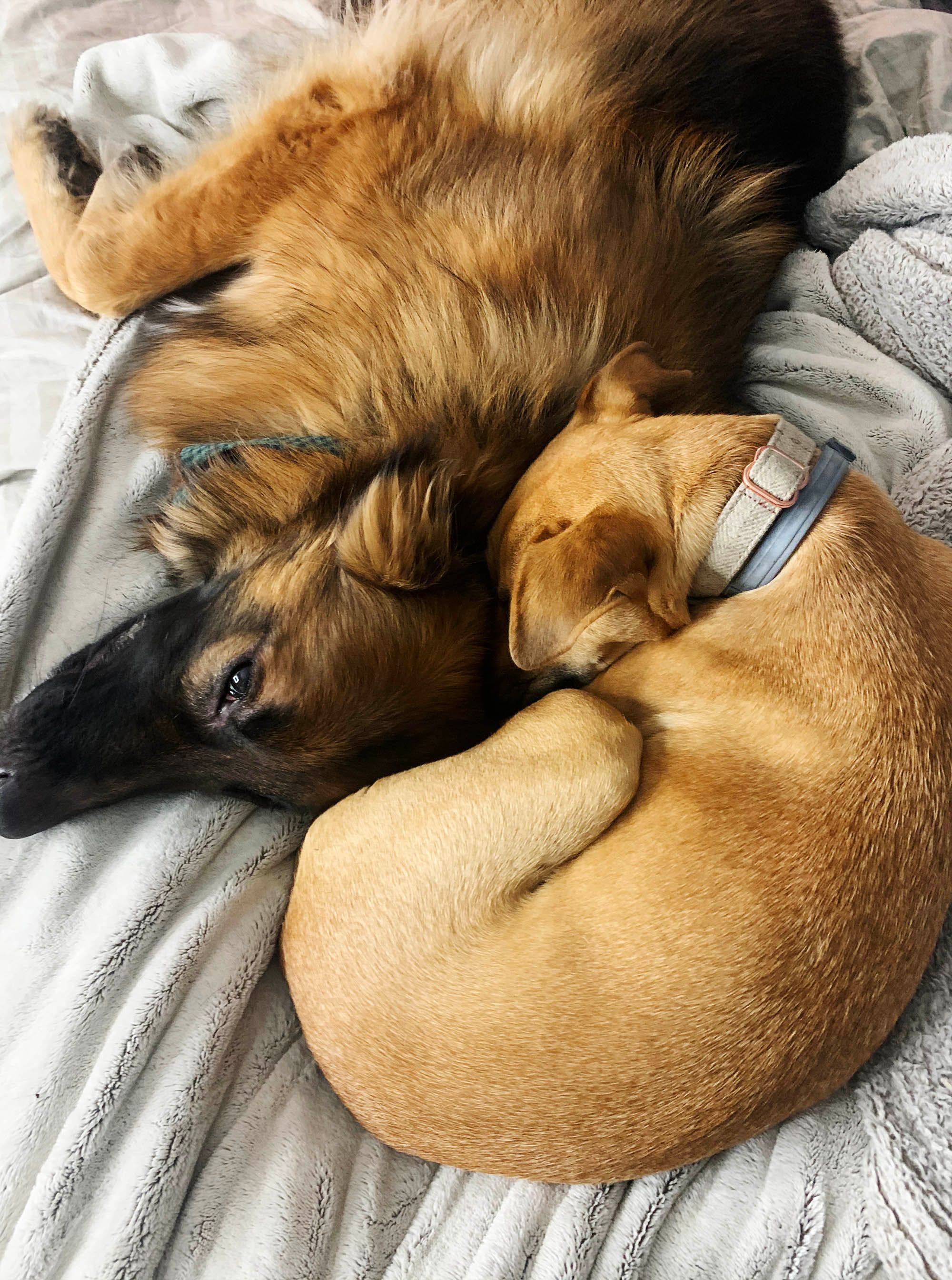 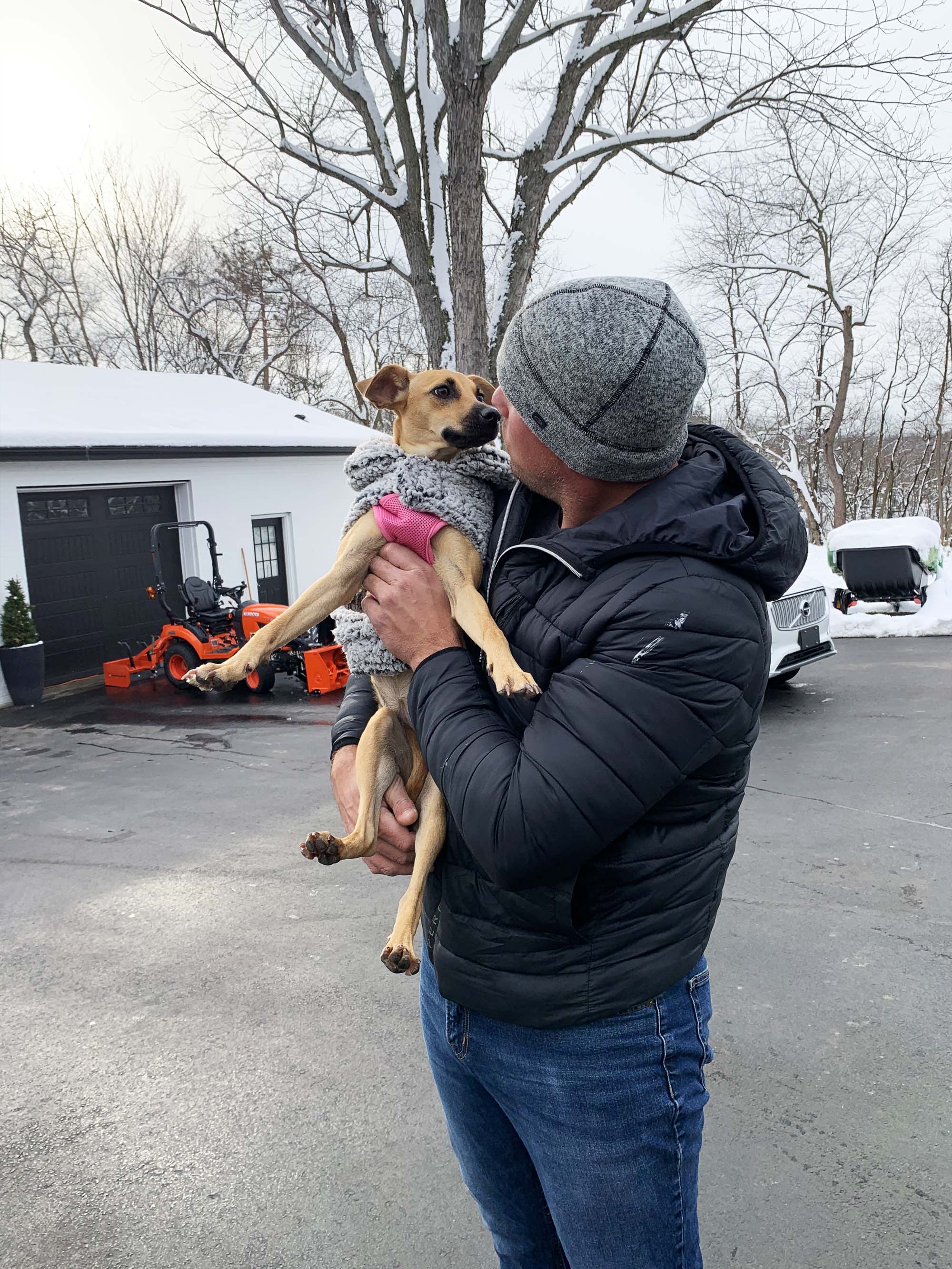 “I wasn’t sure how she’d react after living on the beach,” says Melissa.
Sandy tapped at the snow with one paw. Then she sniffed it. Aaron showed her how to dig for sticks and toys, which must have looked very much like digging for sand crabs. Within ten minutes she was running and rolling in the snow. She even tossed it in the air with her nose.

“She’s happy,” says Melissa. “But this is not a rags to riches story. She was living a good life on the beach, next to Sandals. The guests and staff treated her well. But now she has something she didn’t have there.”

Image: Sweet treats were sent to Sandy from Sandals Resorts, congratulating her on her new home

Sandy has a home. She also has a forever family. The proof is hanging on Melissa and Aaron’s Christmas tree. On the branches are personalized ornaments for Oden and for Ares. Before Melissa and Aaron left their St. Lucian paradise, they found an ornament in the Sandals gift shop: a sailboat on the Caribbean Sea, with a little dog similar in color to Sandy along for the ride. The ornament is now hanging next to Oden and Ares. 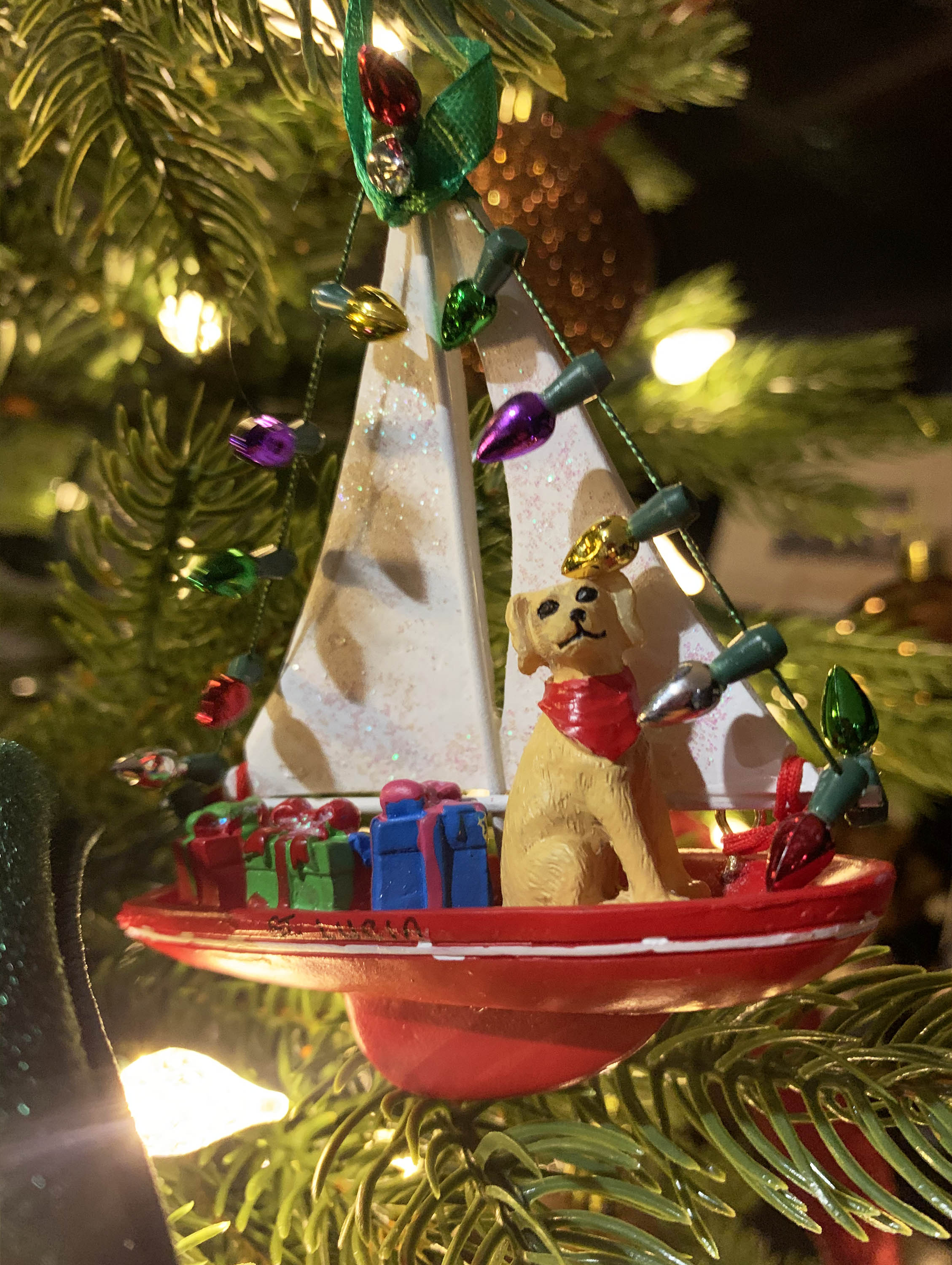 “Whenever I look at her,” says Melissa of Sandy, “I think about our trip.”
And because of that, Sandy has brought paradise home to Pittsburgh.