After 49 years, the Kravitz’s relive their honeymoon right where it all began - at the now Sandals Regency La Toc.

During nearly half a century of marriage, Lenny and Maryanne Kravitz have traveled to 56 countries. They’ve ridden camels in Morocco, stared at the Northern Lights in Iceland, and sipped vintage port wines in Portugal.

“Amazing trips,” says Lenny, “but none of them come close to what we experienced at Sandals Regency La Toc.”

It’s been six months since Lenny (no, not that Lenny Kravitz) and Maryanne returned to their Orlando-area home from Saint Lucia. They’ve had time to plan a trip to Europe and settle into a routine. But they still sound and look awestruck.

“There are moments in life that stand apart,” says Lenny. “You graduate from high school. You get married. You have a child. Those memories cannot be fully explained because they’re so meaningful. Sandals Regency La Toc is now one of those moments.” 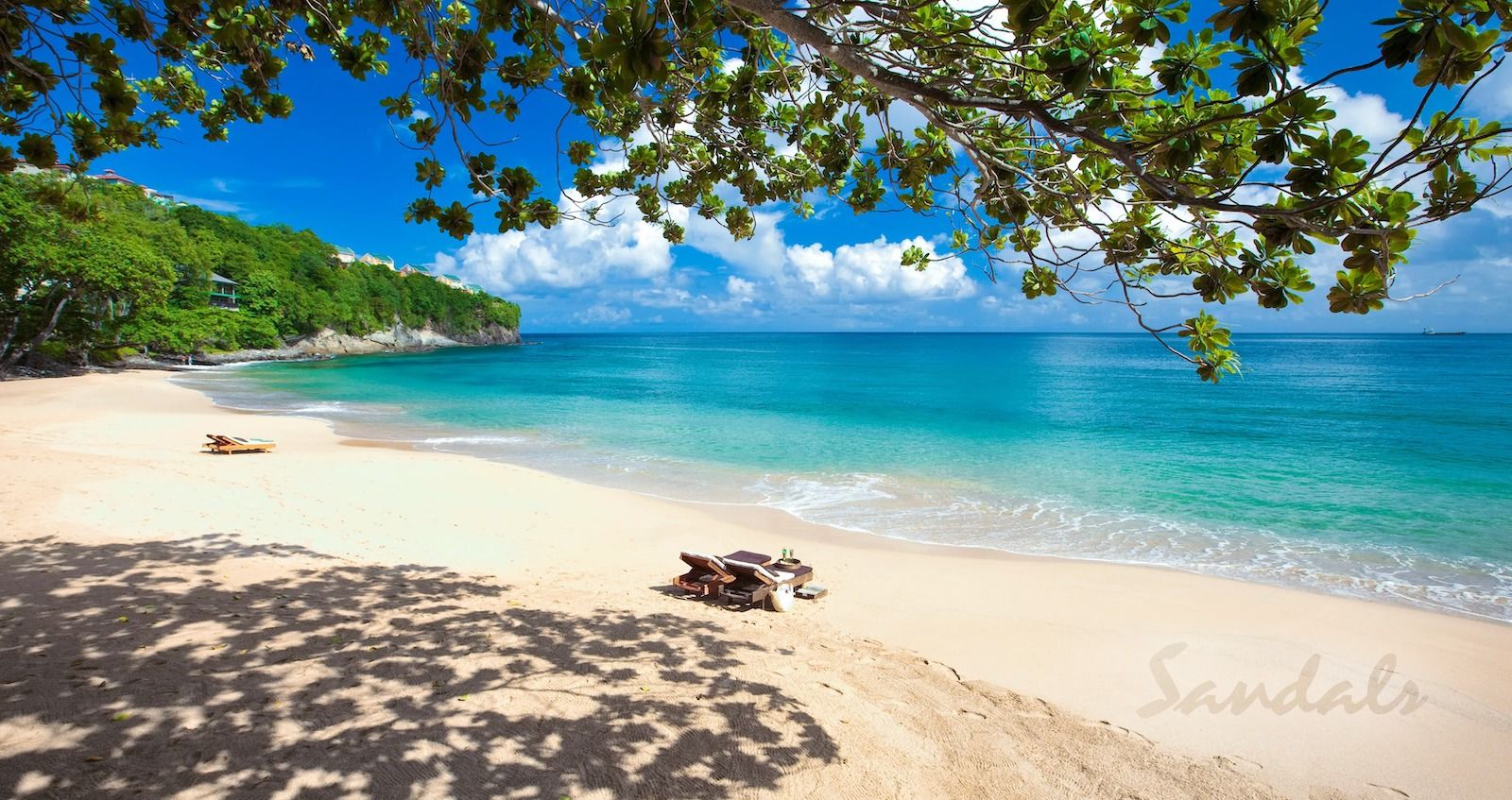 Maryanne gently nods her head. Her eyes are as wide as the windows that overlooked the Caribbean Sea from their suite.

“We expected to enjoy a nice view and renew our vows, and that’s it,” Maryanne says. “This far exceeded anything we expected.”

They did not expect a privately chauffeured car to pick them up at the same airport where, in 1973, they exited a plane in the company of live chickens and proceeded to a wooden shack with a handwritten sign that said “Immigration.” They did not expect to be led to a two-story suite at the edge of the ocean, nor did they expect the ocean to be far more gorgeous than they remembered. 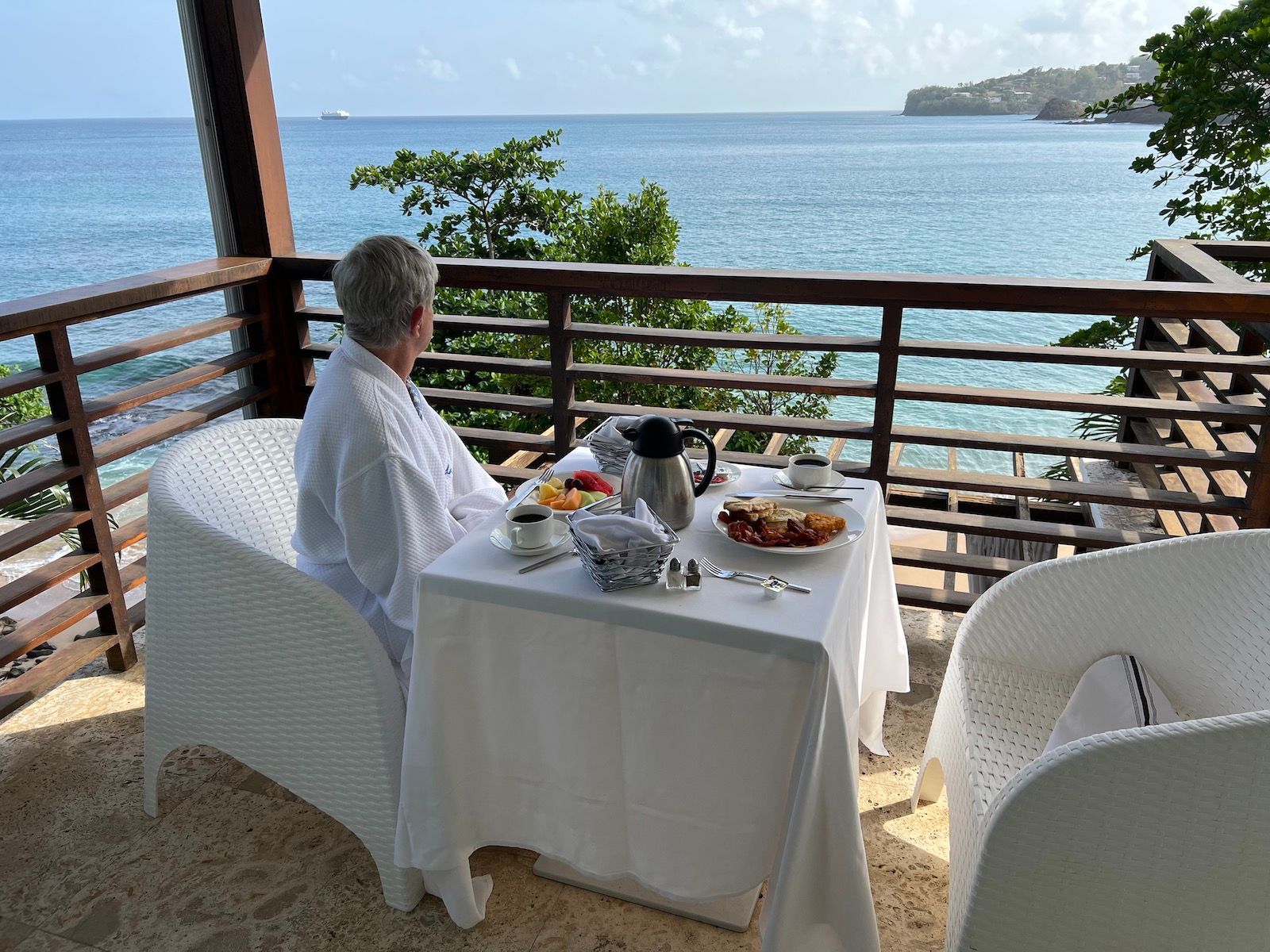 While standing on that balcony, Lenny and Maryanne were swallowed up in the pacifying rhythm of the tropical breeze, which also carried a flood of honeymoon memories. They thought back to the lonely beach walks in 1973, the stars appearing a billion miles closer in the southern Caribbean than in the ambient light near Philadelphia, and the feeling of being newlyweds at the resort which at that time was simply called La Toc. (The first Sandals Resort wouldn’t open until eight years later, in Jamaica.)

“What I really remember is how uptight I was,” Lenny says. “I’d made this huge commitment. We were in a strange place. And I kept wondering if the woman I’d just married was happy. I wish I could have felt back then how I felt this time: totally relaxed, knowing my wife was very happy.”

Lenny grabs an iPad. “We didn’t have one of these back then,” he says. And then he begins to scroll through photos from the 1973 wedding on the outskirts of Philly and the 2022 wedding over the beach. 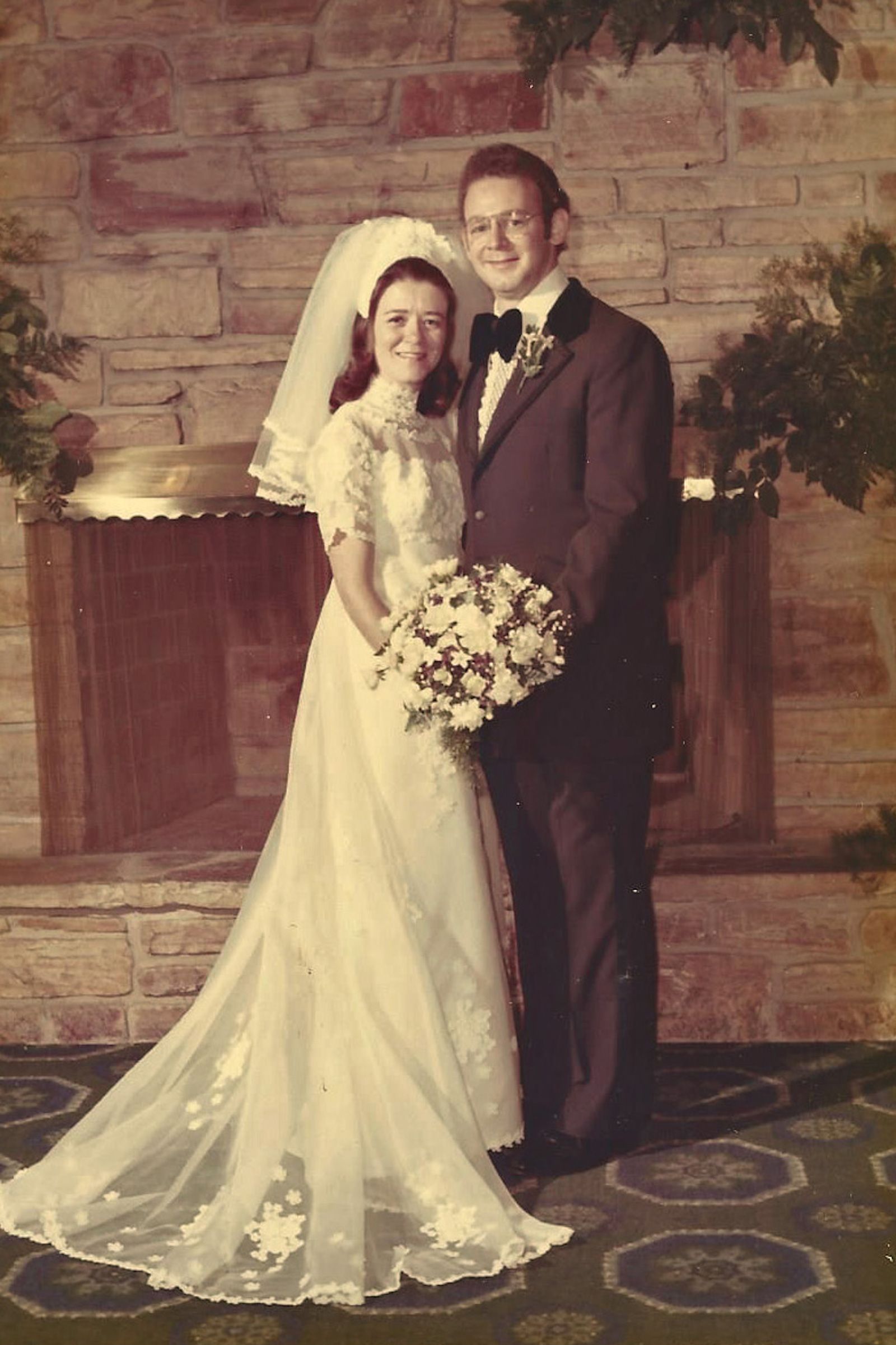 In one original wedding photo, the bride and groom are surrounded by wood paneling inside a country club. In the wedding renewal, they’re surrounded by white sand, teal water, and that memory-laden breeze tousling at Lenny’s hair. 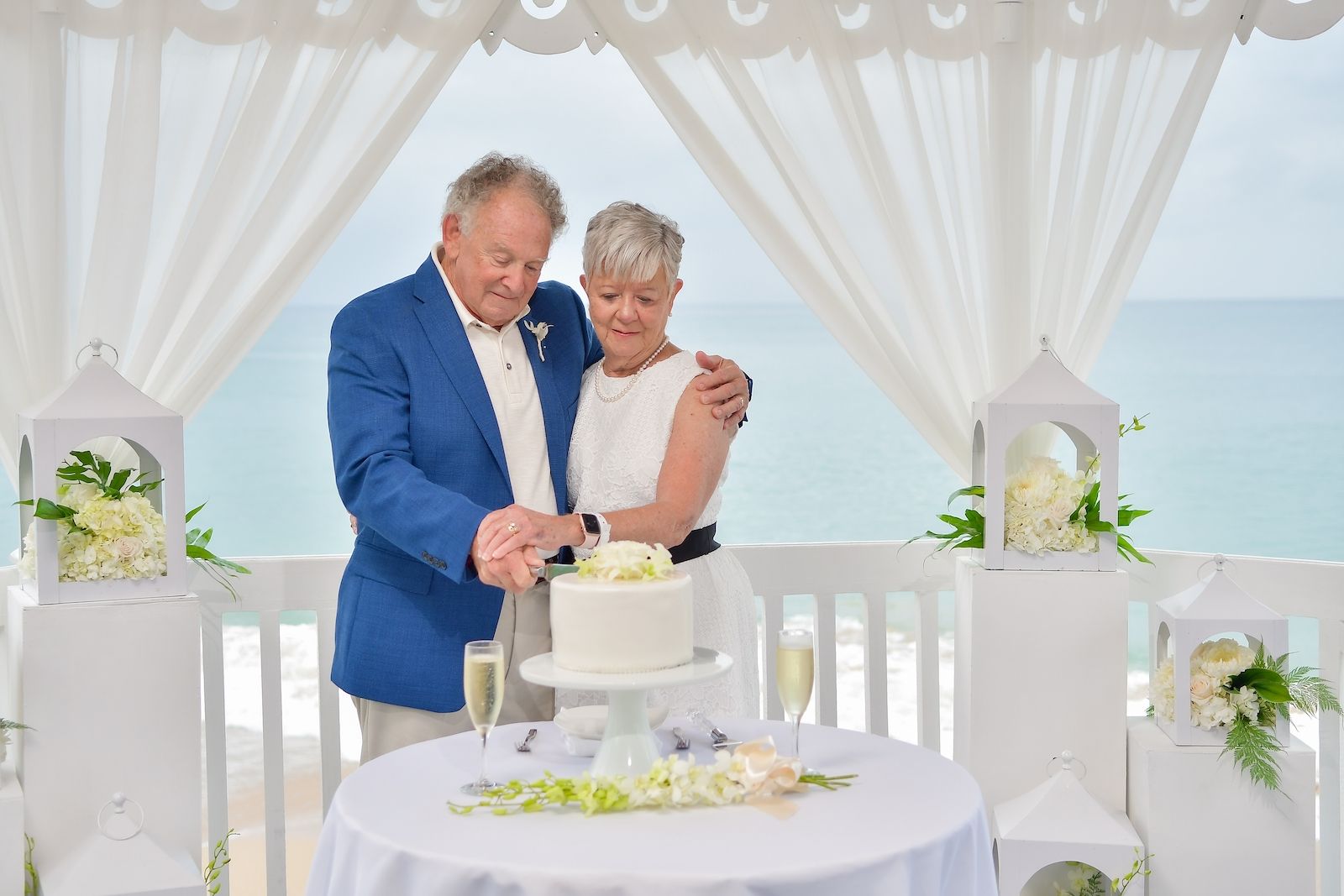 Back then the guests were friends and family named Fred, Ray, Claire, and Joyce. This time they were Sandals team members who are now considered family: Mr. Lucky, Rohan, Chelsea, Gilbert, Elsa, and Waynedell. 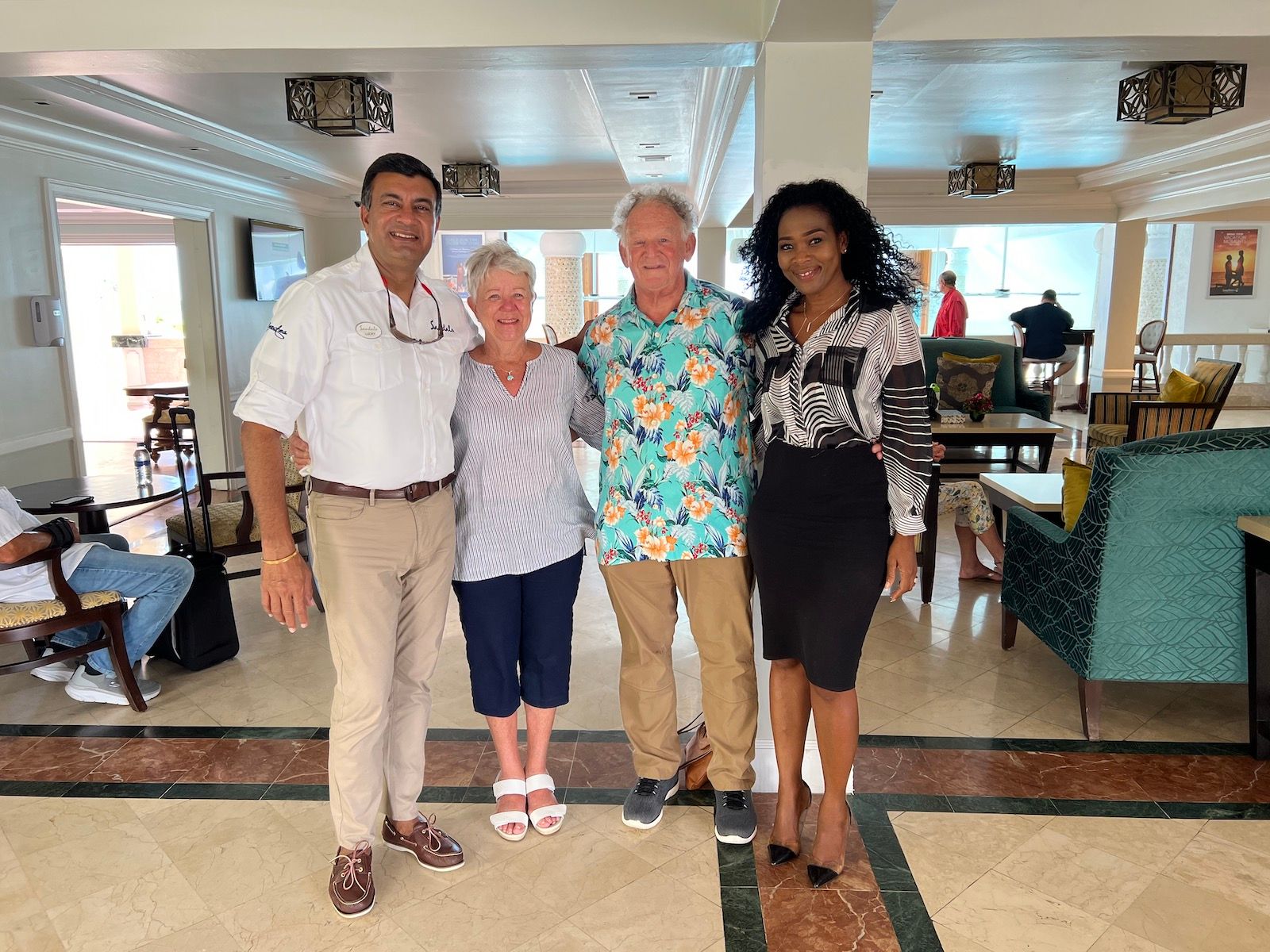 Photo: Lenny and Maryanne Kravitz with their Sandals family.

“Our first wedding will always have a special place in our hearts,” Maryanne says. “But this one at Sandals …” allowing those wide eyes to finish the thought.

When they honeymooned in Saint Lucia in 1973, the island was barely known unless you had a friend from the Caribbean or an adventurous travel agent. The hotel was very formal — the suits, the British flair, and the table settings at dinner.

“We had to pack a lot more luggage for that trip,” says Lenny.

The most memorable feature of their room was its proximity to the pool, which had a palm tree in the middle of it. 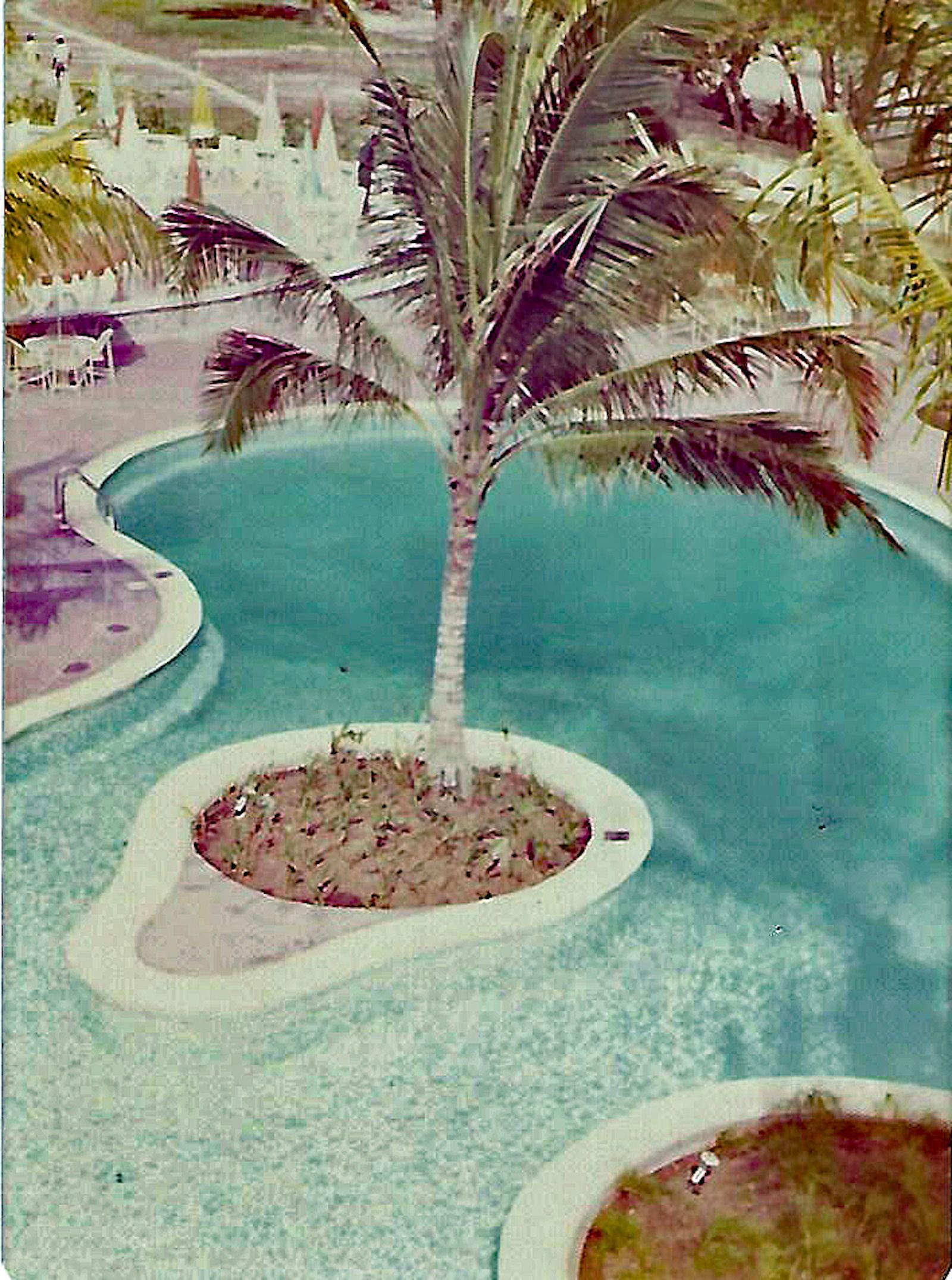 Photo: Pool view from the Kravitz's room at the previous La Toc Resort.

“We’ve always thought of our honeymoon as a journey to an undiscovered tropical paradise,” Maryanne says. They talked about going back to La Toc for their 10th anniversary, then their 20th and 30th. But they were raising kids and building careers.

“It was always ‘someday,’” Lenny says.

A lot changed over the years. They moved to Florida. The kids grew up and had their own kids. The man everyone knew as Len Kravitz embraced the name Lenny Kravitz after the musician of the same name became a rock star. When Lenny wrapped up his full-time marketing career, he and Maryanne decided to travel the way they once did: just the two of them to wherever they wanted to go. On a cruise to the southern Caribbean, they planned to take a day trip off the ship to visit La Toc. They’d always wanted to sit together on that beach again. While they weren’t able to step foot onto Saint Lucia, they took a little catamaran ride from the ship to get a little closer. 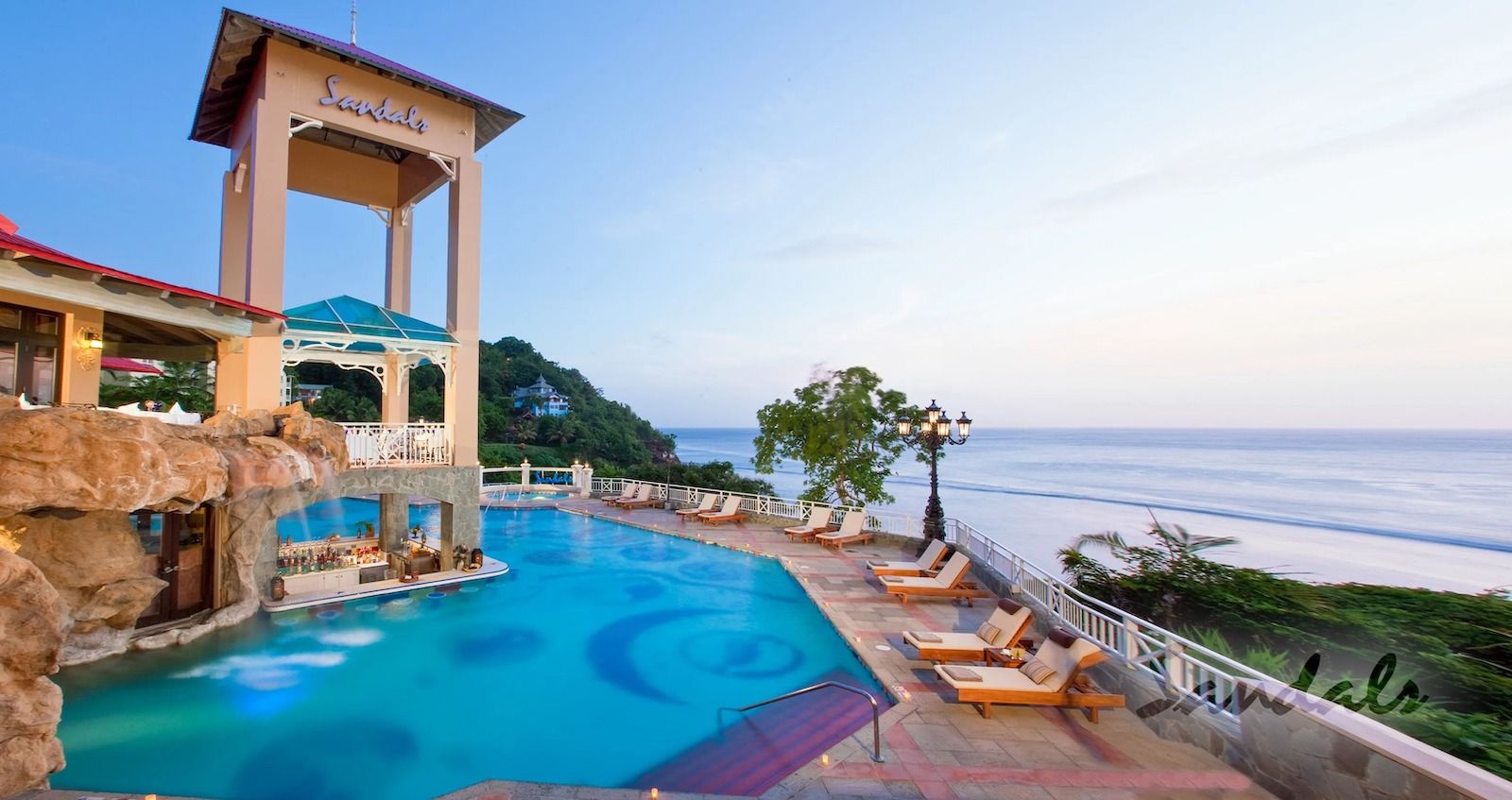 Something else changed after their honeymoon at La Toc. It became Sandals Regency La Toc. The resort blossomed into a luxury-included escape with nine restaurants and 22 categories of suites, including honeymoon hideaways and oceanfront villas.

It had become more laid back than ever. After the cruise, Lenny and Maryanne went online and discovered a “Retie the Knot” package at the all-inclusive resort. They’d waited 49 years to return to the place where their marriage started, and they weren’t going to wait one more.

“Let’s get married again,” Lenny said. This time the ceremony would be in paradise, and the planning would be heavenly.

In April 2022, Lenny and Maryanne were led to their two-story oceanfront suite. The staff created a sign saying, “Welcome Home, Mr. & Mrs. Kravitz.” 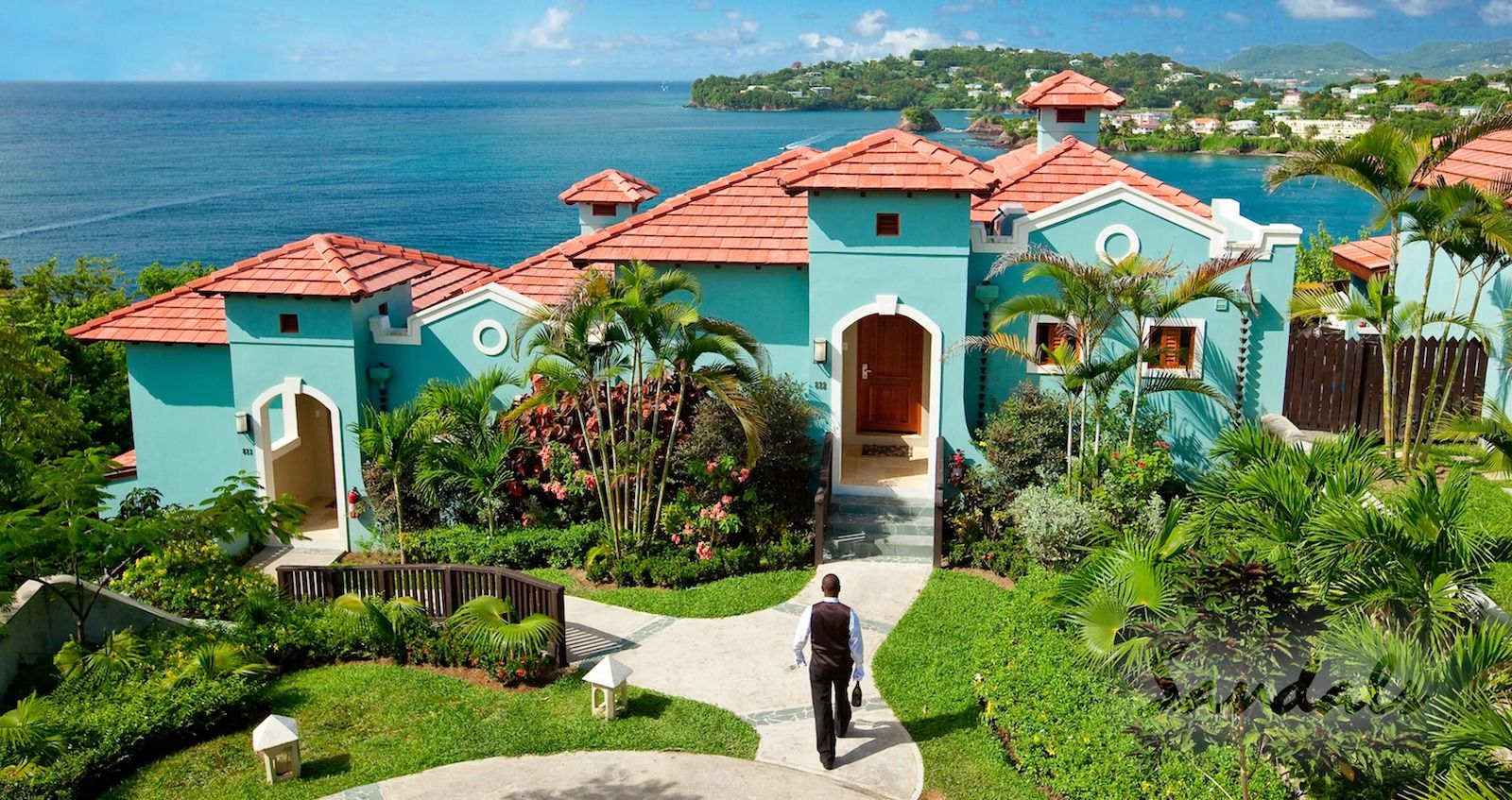 They met three butlers, a mini-bar that should be called a maxi-bar, and a wedding planner who asked a handful of questions:

What music would you like? The 12th of Never.
What kind of cake can we prepare for you? We’re feeling rum spice.
Flowers? Surprise us.

The ceremony would be in an open-air gazebo over the beach. All Maryanne had to do was unpack her new cocktail dress. Lenny unfurled a sport coat.

“We didn’t want to ask the butlers to do anything,” Maryanne says, “but after a day or so we realized they enjoy making people happy.”

Lenny hinted at possibly having a few extra snacks. Maryanne mentioned how she enjoys a cold Pinot Grigio. When they came back from a tour of the island, they found bags of Lays and Sun Chips next to bottles of Pinot Gris. One of the butlers, Gilbert, had pressed Lenny’s pants. 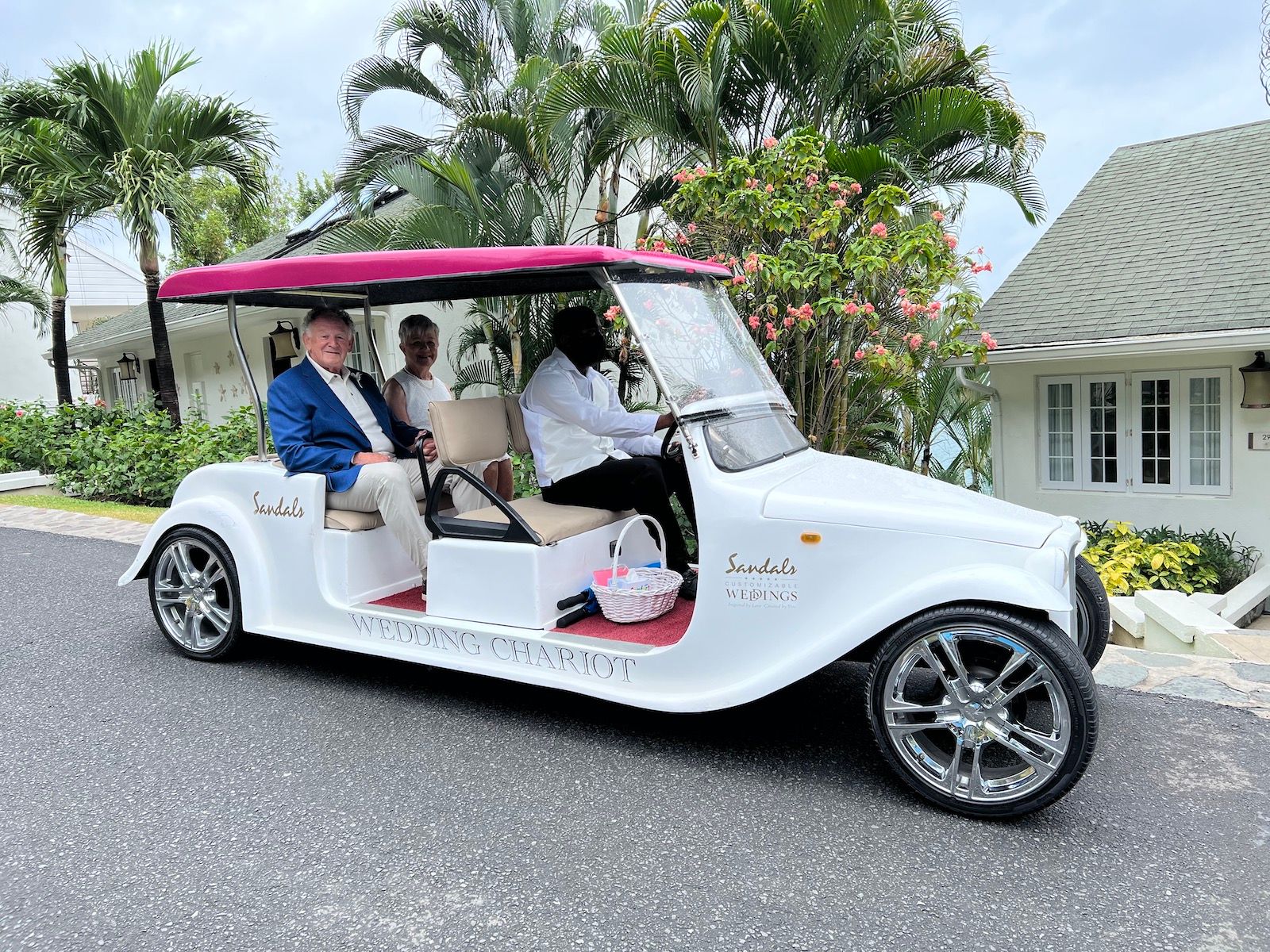 Photo: Lenny and Maryanne Kravitz being whisked away in a Sandals Wedding Chariot before renewing their vows.

A few hours before the ceremony, Lenny made one more request. Maryanne had printed her vows before leaving Orlando. Lenny decided to let the Caribbean mood move him and wrote his on a Sandals notepad. He asked another butler, Chelsea, if she would listen and provide feedback.

“I would love to listen,” Chelsea said. The words went like this:

In a hundred lifetimes,
In a hundred worlds,
In any version of reality,
I’d find you and I’d choose you!
I love you to the moon and back!

The new wedding-day pictures are sequenced between photos of Lenny smoking a pipe at the pool in 1973 and Lenny smoking a cigar in the bathtub in 2022. There’s Maryanne at a nearby restaurant called The Coal Pot 49 years ago and Maryanne at the same restaurant six months ago. “The general manager, Mr. Lucky, and hotel manager, Rohan, set that up for us,” she says, eyes still wide and a little moist. 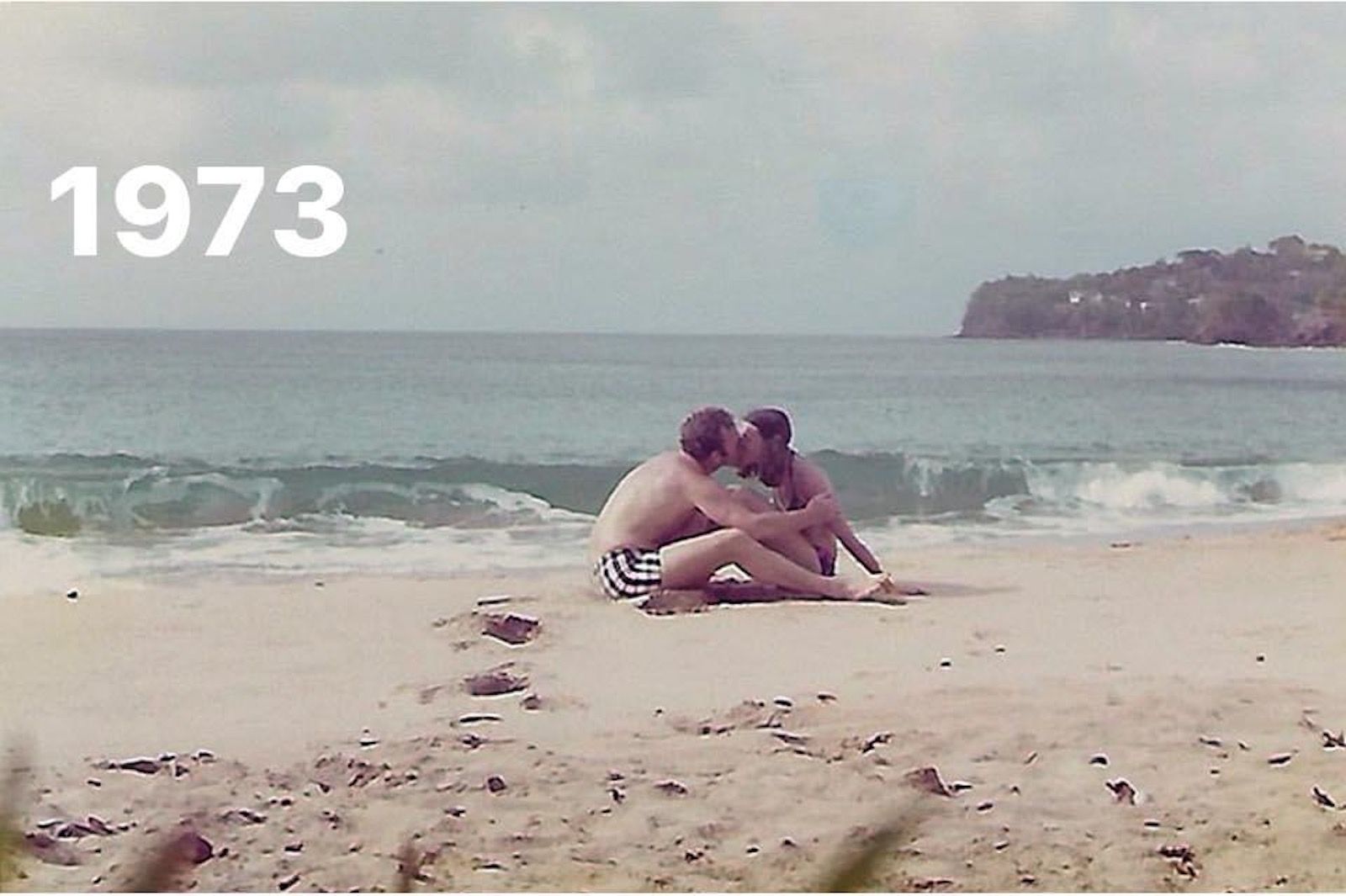 Photo: Then and now - The Kravitz's recreate their beach honeymoon photos from 1973 at Sandals Regency La Toc. 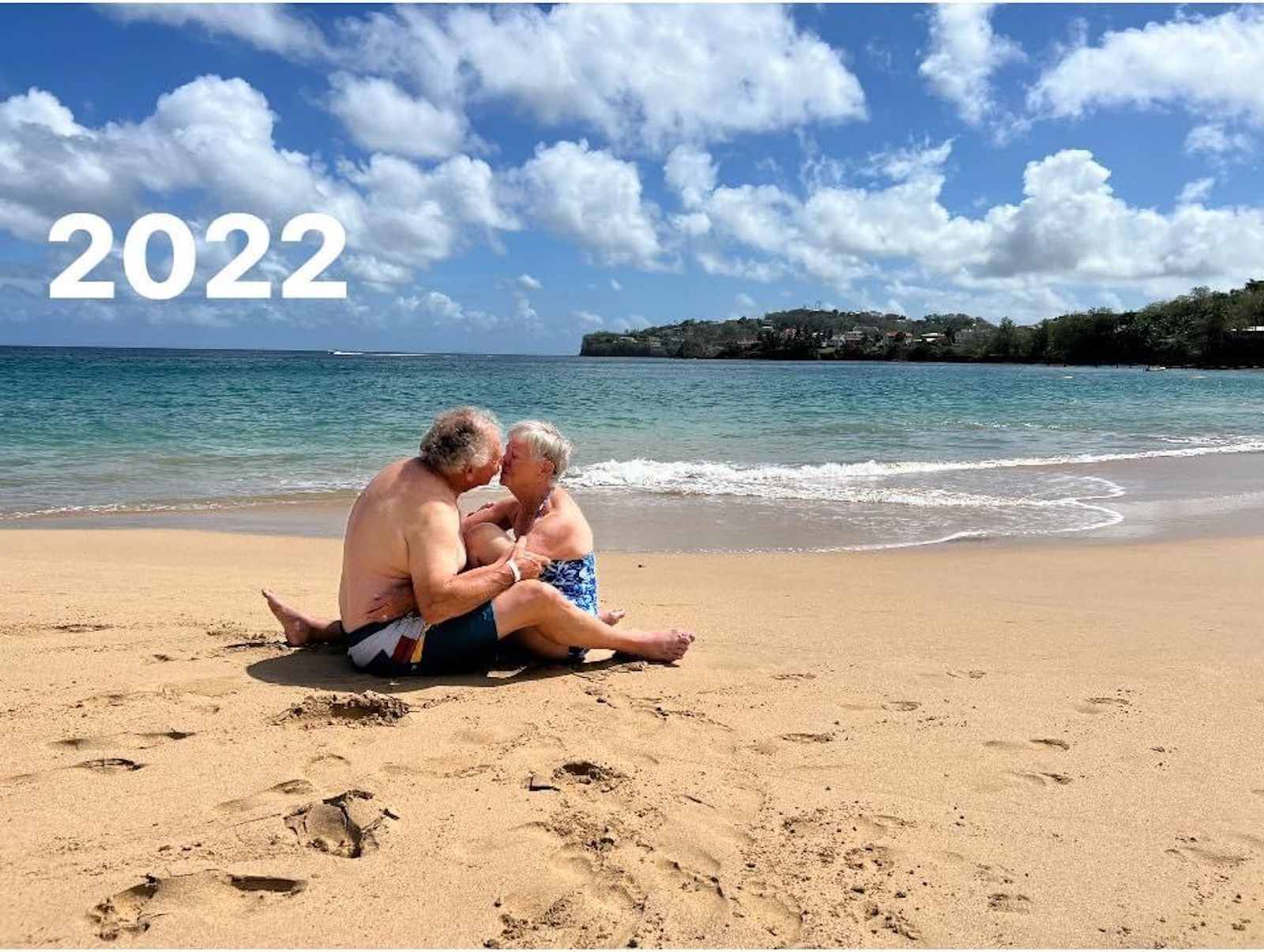 And then there are her vows. They start with the words, “When as a young woman I thought about my wedding day …” and end with, “You are my best friend, my confidant, and my one true love … After 49 years, I still look forward to spending the rest of my life with you, and vow to continue loving you forever.”

Lenny and Maryanne look up from the pictures. “We won’t wait to go back,” Lenny says.

They now have more than memories at Sandals Regency La Toc… “We have a family there.” 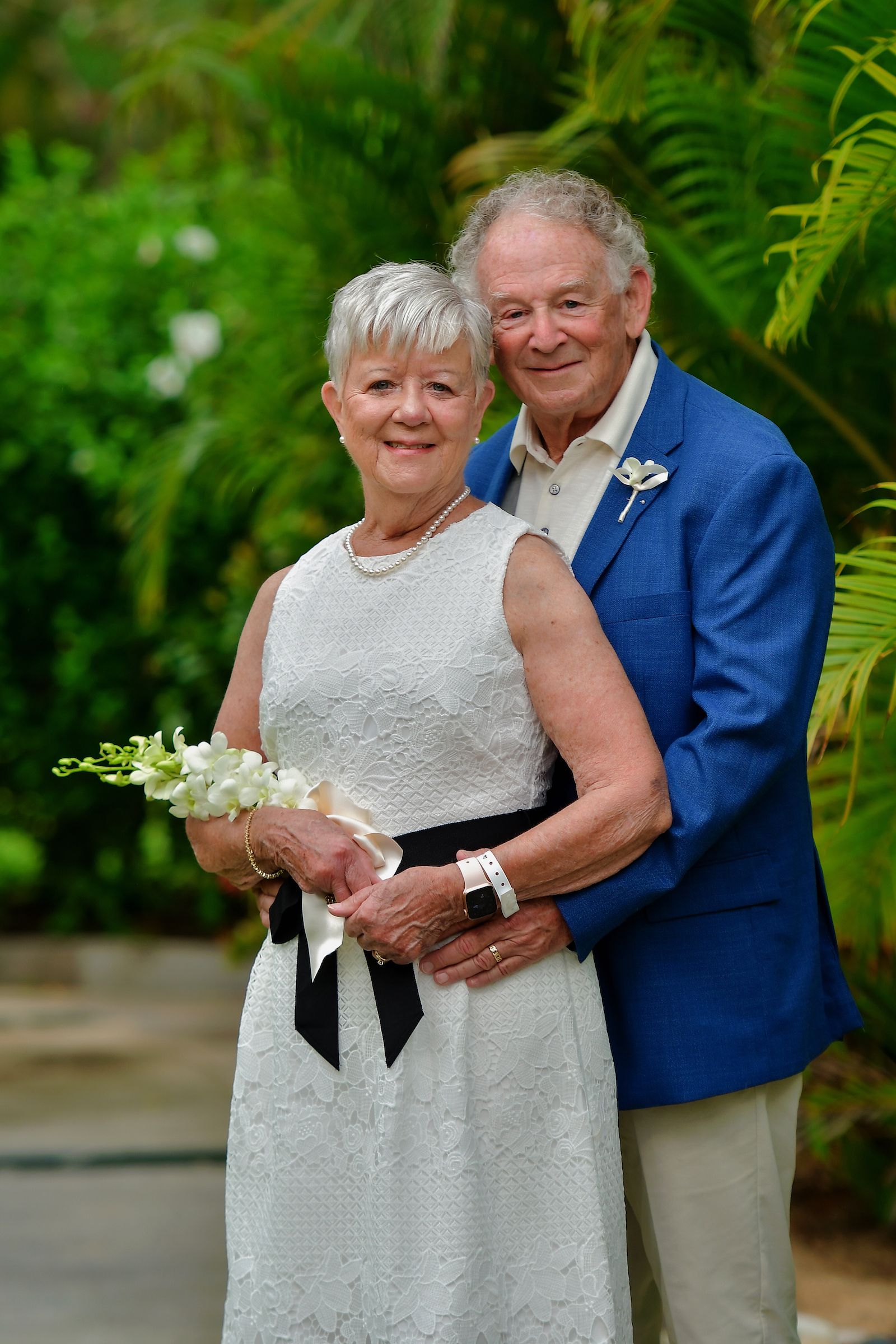 Fashion-Forward: An Inside Look at the New ‘Fits’ Debuted at Sandals Royal Curaçao

Sandals Resorts has been evolving since 1981, but one thing that remains constant is its incredible team members who make up the soul of the brand family. So, as a special tribute, and in continuation of its 40th Anniversary celeb…

Fashion-Forward: An Inside Look at the New ‘Fits’ Debuted at Sandals Royal Curaçao

Sandals Resorts has been evolving since 1981, but one thing that remains constant is its incredible team members who make up the soul of the brand family. So, as a special tribute, and in continuation of its 40th Anniversary celeb…