It’s only been a few weeks since Bobby and Patrice Chen were married at Sandals Grande St. Lucian. Patrice is already apologizing for not having their favorite wedding picture on display at their home in Nassau, The Bahamas. She can, however, describe every detail without even looking at it.

“We’re standing at the back of the over-the-water wedding chapel. I’m in my gorgeous wedding dress. Saint Lucia’s Mountains are in the background and the Caribbean Sea is underneath us.” Patrice pauses. “Bobby and I are so happy. It was way more special than we ever expected.” 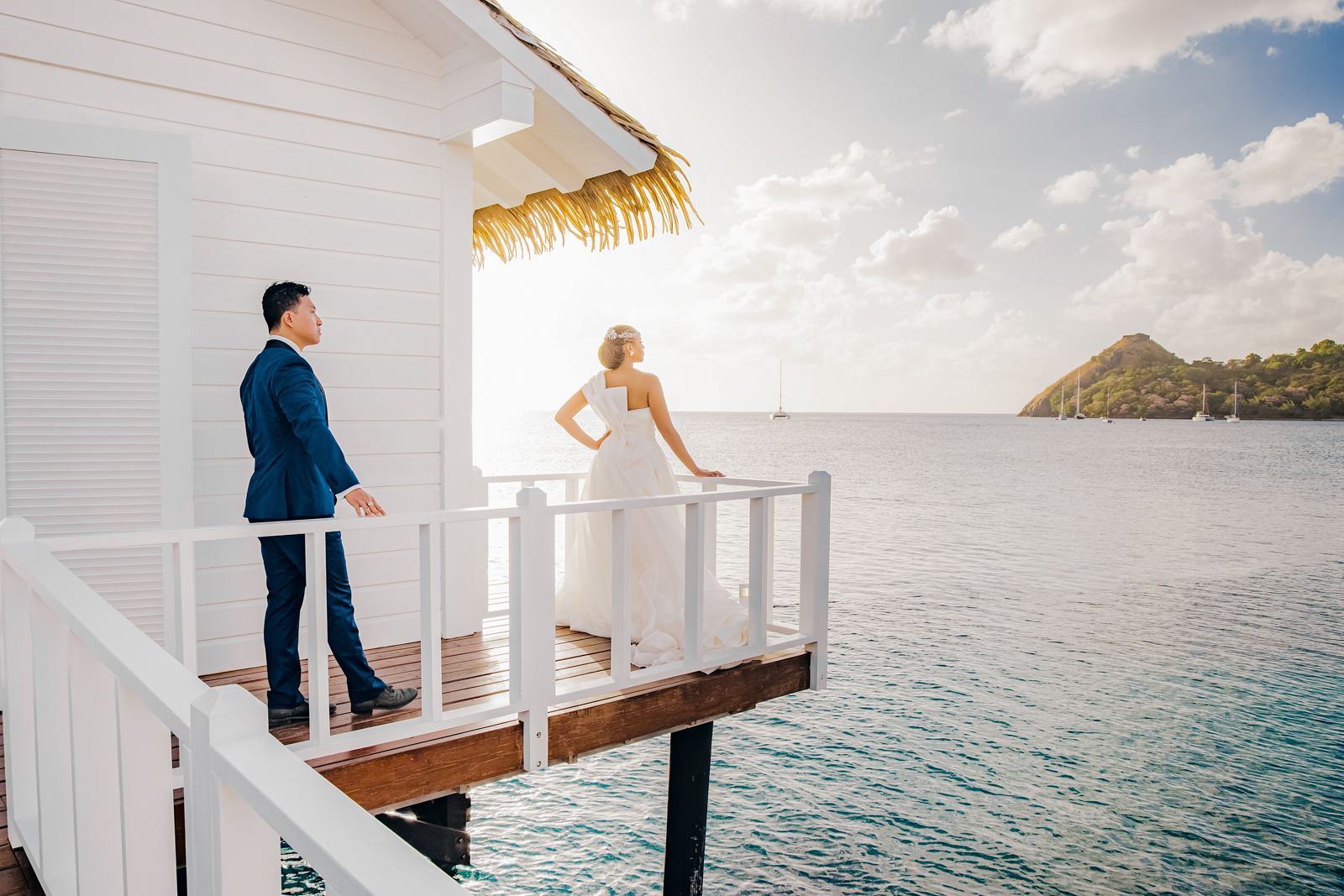 Bobby wants to make his own crystal-clear point:
“I mean this from the bottom of my heart: We will always be indebted to Sandals. They made our dream wedding come true even though we weren’t supposed to be married there.”

You can sense the awe in Bobby’s voice when he says “dream wedding.” He says he was “reaching for the moon” when he began courting Patrice a few years ago. “I can’t believe she’s my bride,” he says, as if he doesn’t want to wake up.

But there’s much more to their can’t-believe-this-happened sentiment than meets the eye. While dozens of couples have been married in that same chapel on the sea at Sandals Grande St. Lucian, it’s safe to say there’s been nothing quite like the Chens’ wedding adventure.

Because just as they were about to tie the knot, it almost came completely unraveled… 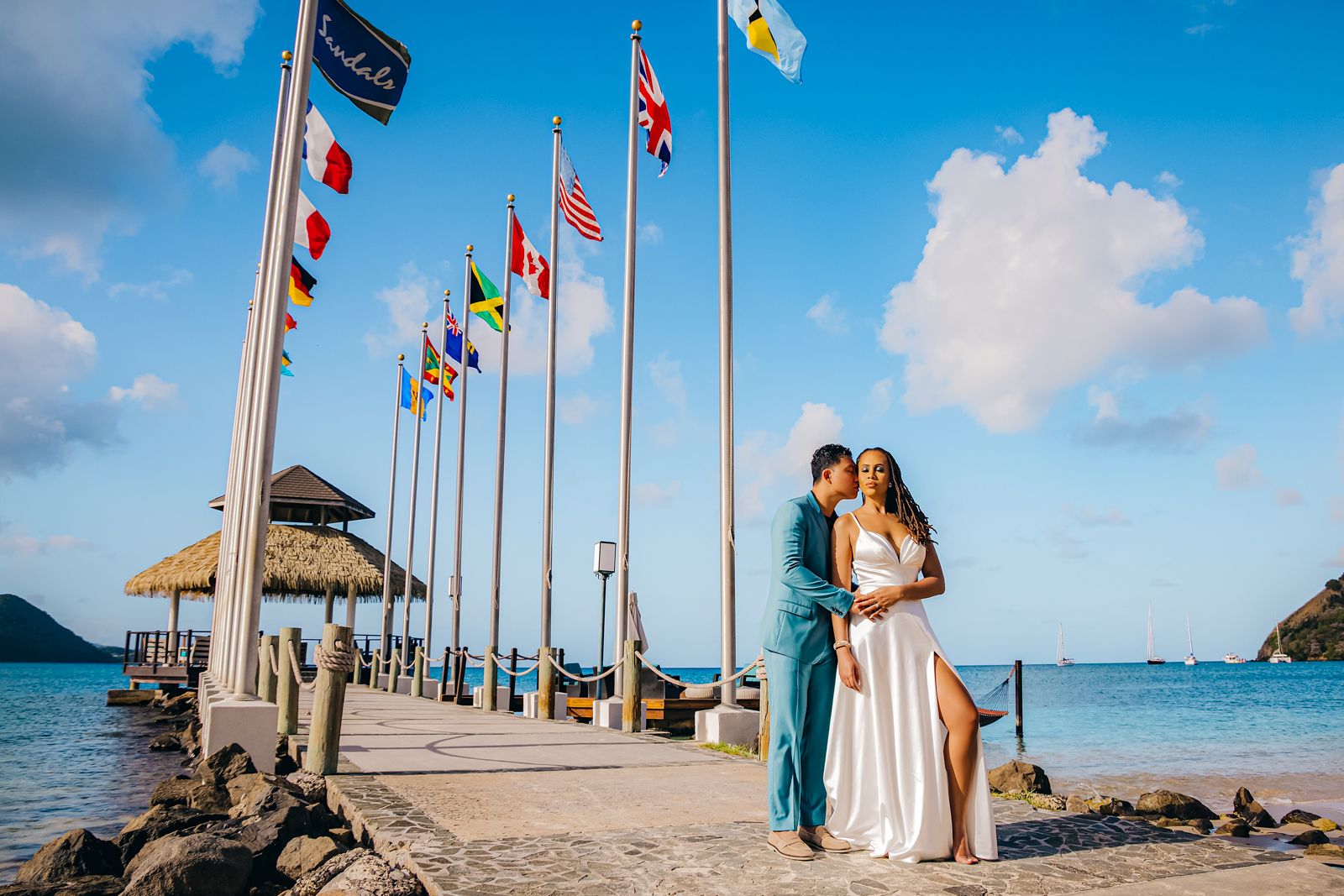 Eight days before their Sandals all-inclusive wedding, Patrice walked into the bank where she works in Nassau. After ten months of wedding plans, she felt this-close to finally walking on air. Every passing minute was leading to the vows she and Bobby would take on a sky terrace at another resort.

Shortly after 7:30 a.m. on that Friday, Patrice received a text from her mother. She read it twice.

“The rumors about the wedding venue are true. It’s closing.”

Before Patrice could question the accuracy of her mother’s text, her phone lit up with another message, this one from the wedding coordinator at the anonymous resort: “Need to consider another resort.”

Patrice reacted as any bride-to-be would: No! This cannot… we’re getting married next week!

“It had been stressful enough to plan our wedding during COVID,” Patrice says. “To hear a week in advance the venue wouldn’t be available… I felt defeated.”

She collected herself just enough to make a call to Bobby and break the news. Bobby tried to mask his shock and disappointment by cheerleading what seemed to be a lost cause: “Don’t worry. We’ll get this sorted out.”

As much as Bobby wanted to believe what he was saying, he knew it would take another moonshot to make the wedding a reality. His first move was to call a friend who works at Sandals Royal Bahamian in Nassau. 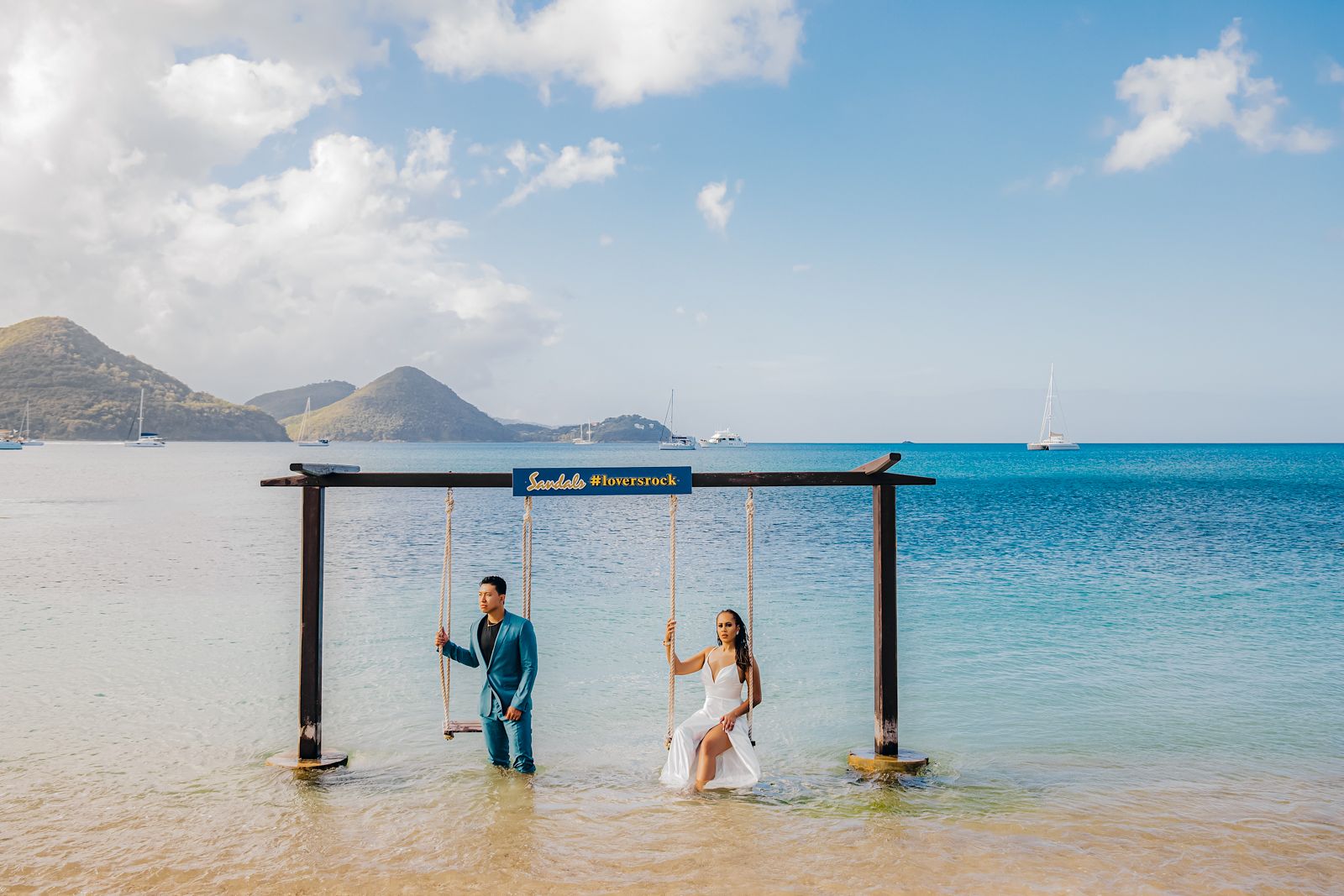 “I wasn’t sure he could do anything, but Sandals was the first place I thought of,” says Bobby. Within an hour, Bobby and Patrice were explaining their situation to a wedding planner with Sandals in Saint Lucia, where Patrice’s parents live.

To their surprise, the planner said, “No worries.” She meant it, too. “We will create a destination wedding beyond your expectations at Sandals Grande St. Lucian and remove all your worries.”

“By next week?” Patrice asked.

She helped Bobby and Patrice mentally depart their conundrum and land in Sandals’ magical virtual wedding showroom. There, they explored a checklist of tall flower baskets, ivory white chairs decorated with roses, a smoke machine for the dance floor, and a dinner of lobster and bisque. A rum-and-game night for the guests? Absolutely. Pyrotechnics on the beach? Heck, yeah. 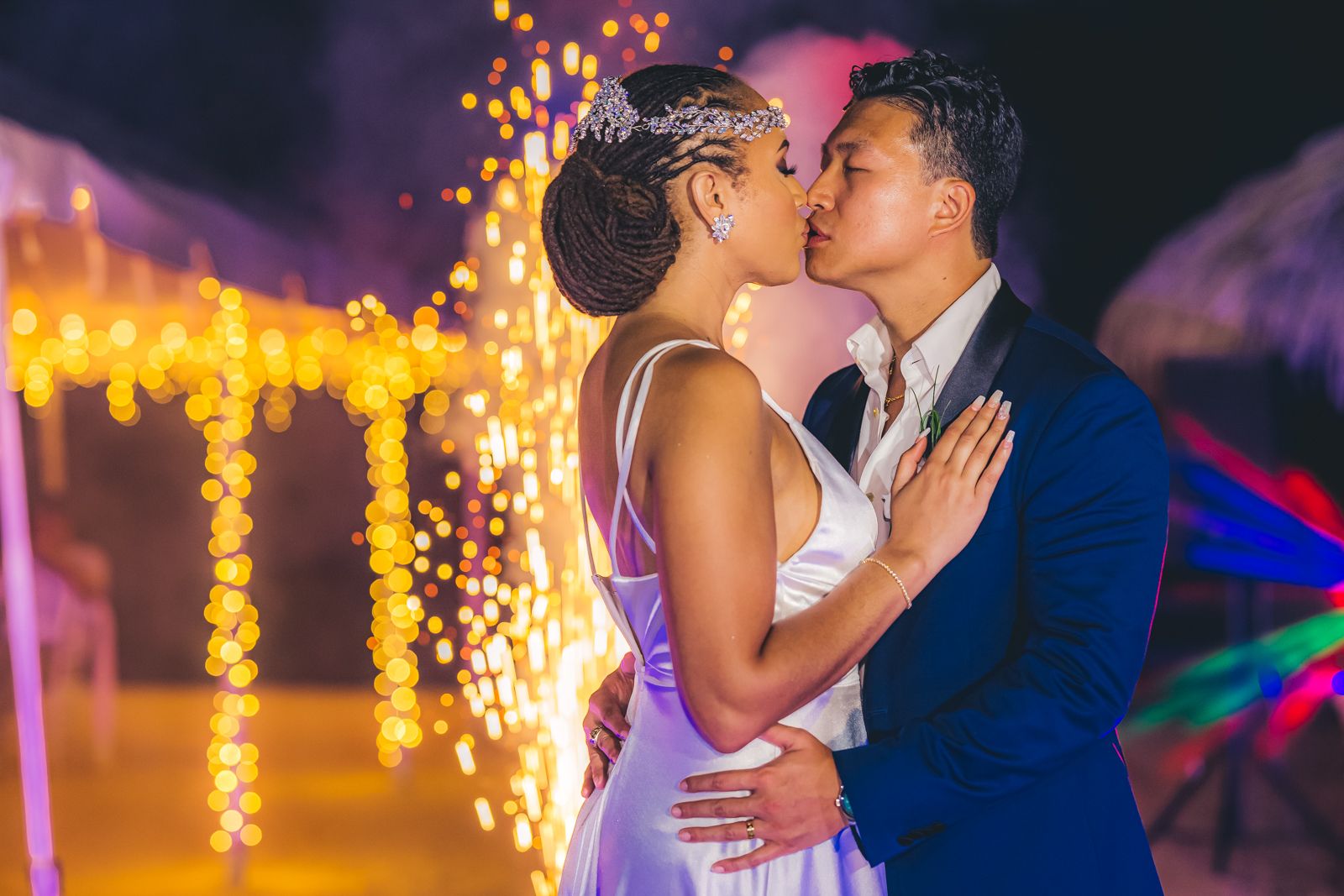 “We were planning from scratch,” says Patrice, “and the Sandals wedding team made it fun and completely stress-free. The pressure immediately got lifted off our shoulders and we had nothing to worry about thanks to Amenda and the weddings team who assured us that we’d get our perfect day and more.”

For a suite, Bobby and Patrice chose to stay in a beachfront Rondoval, with a Jacuzzi, a pool, and a butler who would find it a pleasure to bring fruit trays to their beach cabana — with Johnny Walker Black on the rocks for Bobby and gin and tonics for Patrice.

Bobby and Patrice could not believe their eyes when they came to the options for wedding venues: the chapel on top of the sea, with a glass floor, was waiting to awe them. 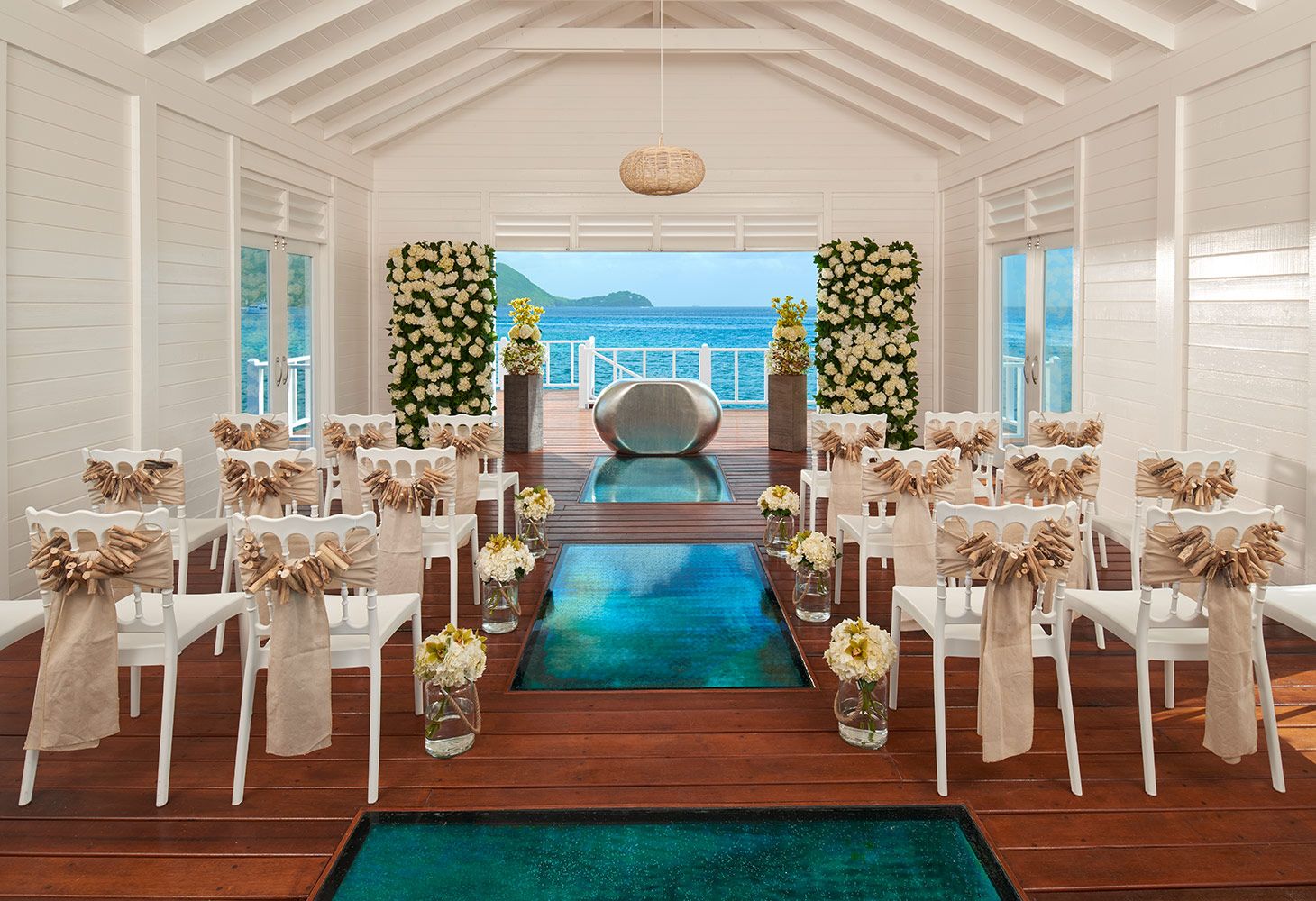 “We’d seen pictures of the over-the-water chapel at Sandals right after we were engaged,” says Bobby, “but we didn’t think we could be married there with 120 guests. That’s why we decided on a different resort at first. So when we saw the chapel was available and our guest list was down to 22… we were just, wow.”

The day that had started as one of the worst in Patrice’s life had, by mid-afternoon, become one of the most miraculous.

A few days later, Bobby and Patrice flew to Saint Lucia and stepped into Sandals Grande St. Lucian with their closest friends and family members. Maybe this was supposed to be the dream all along.

“It felt like the weight of the world fell from our shoulders when the staff greeted us with those beautiful smiles,” says Patrice. “I really believe they were as happy as our friends and family to be part of our celebration.” 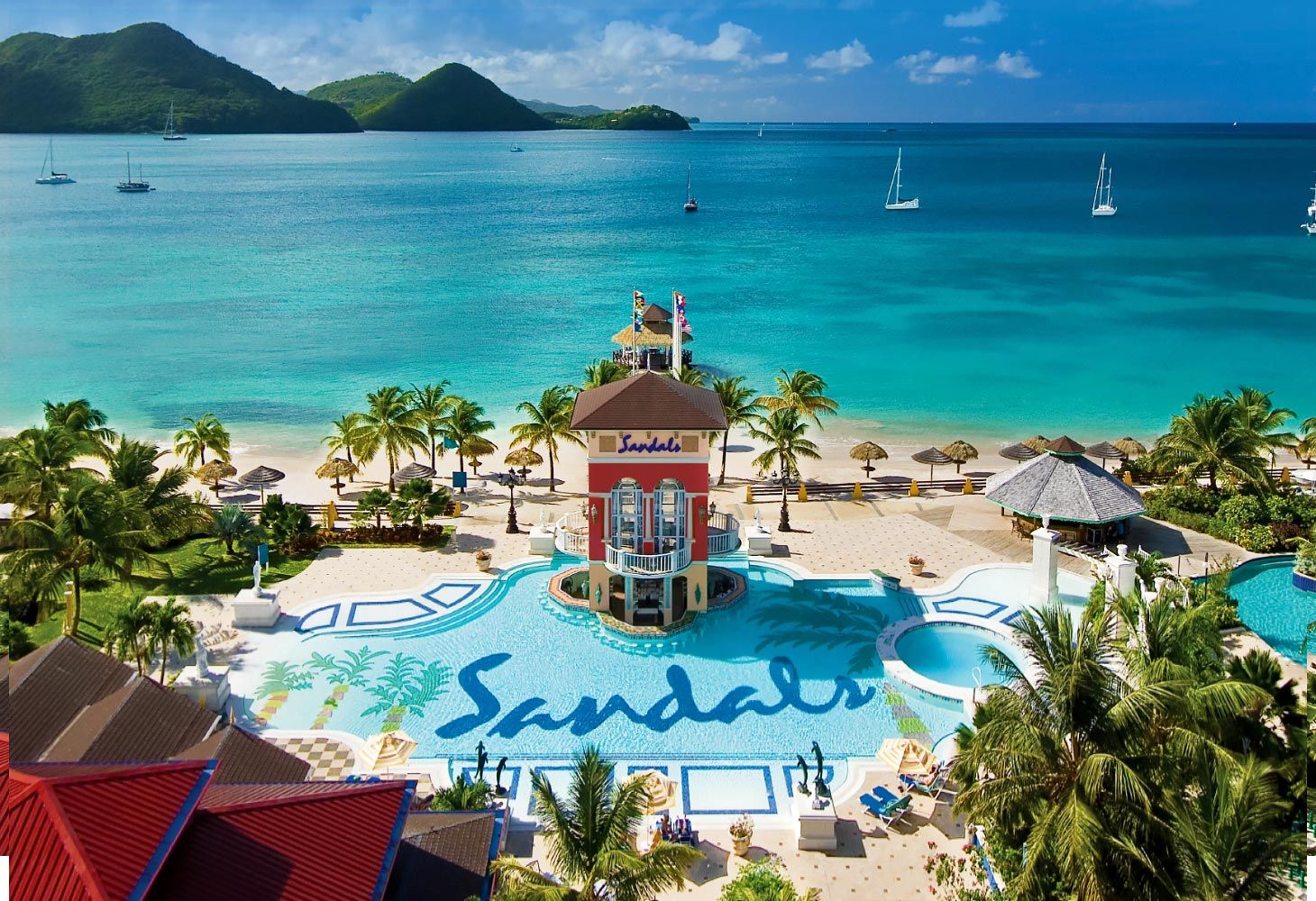 The couple-to-be walked past the registration desk and towards the pool to fully absorb the ocean breeze and view of the gem-clear ocean. They were both overcome with a reality that a few days earlier had seemed like an impossible fantasy: We’re actually getting married here.

They didn’t even notice the bartenders wearing masks, the staff continually sanitizing surfaces, or the intentional distances being kept as part of Sandals’ Platinum Protocols of Cleanliness.

“In a way, the COVID phenomenon over the previous 10 months added to the preciousness of being there,” says Bobby. “We were unloading a year’s worth of anxiety and fully appreciating where we were and who we were with. Honestly, we didn’t need 100 people there.”

“We were sort of in our own ‘love bubble’, surrounded by our small group of friends and family who traveled to Saint Lucia with us to celebrate and have the time of our lives with the people we love the most.”

And the ceremony they’d all come for was still two days away. 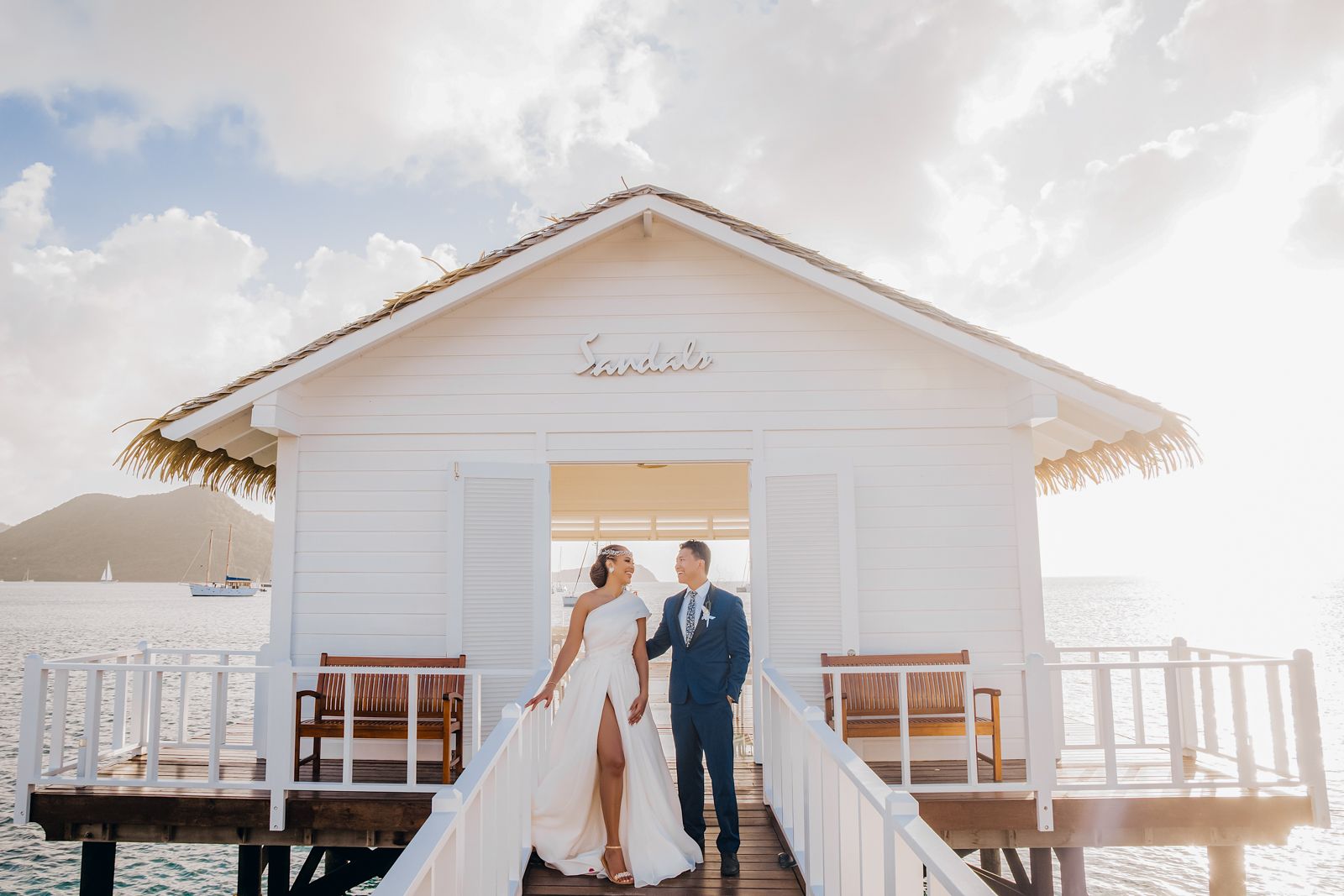 On the afternoon of the wedding, Patrice walked down the glass boardwalk that leads from the beach to the sea. She entered the open-air chapel and Bobby’s line of sight. The brightness of the sun and the sand were only eclipsed by the brilliance of Patrice’s dress — the one she allowed Bobby to pick out.

“As a little girl, I didn’t dream of a huge wedding,” she says. “But I did picture my dress being amazing, everyone turning to watch me walk down the aisle, and my husband crying.”

Her dress was amazing. All eyes were fixed on her. And yes, Bobby did have to wipe tears from his face. The day was not, however, what Patrice had envisioned 20 years ago, or even eight days earlier. 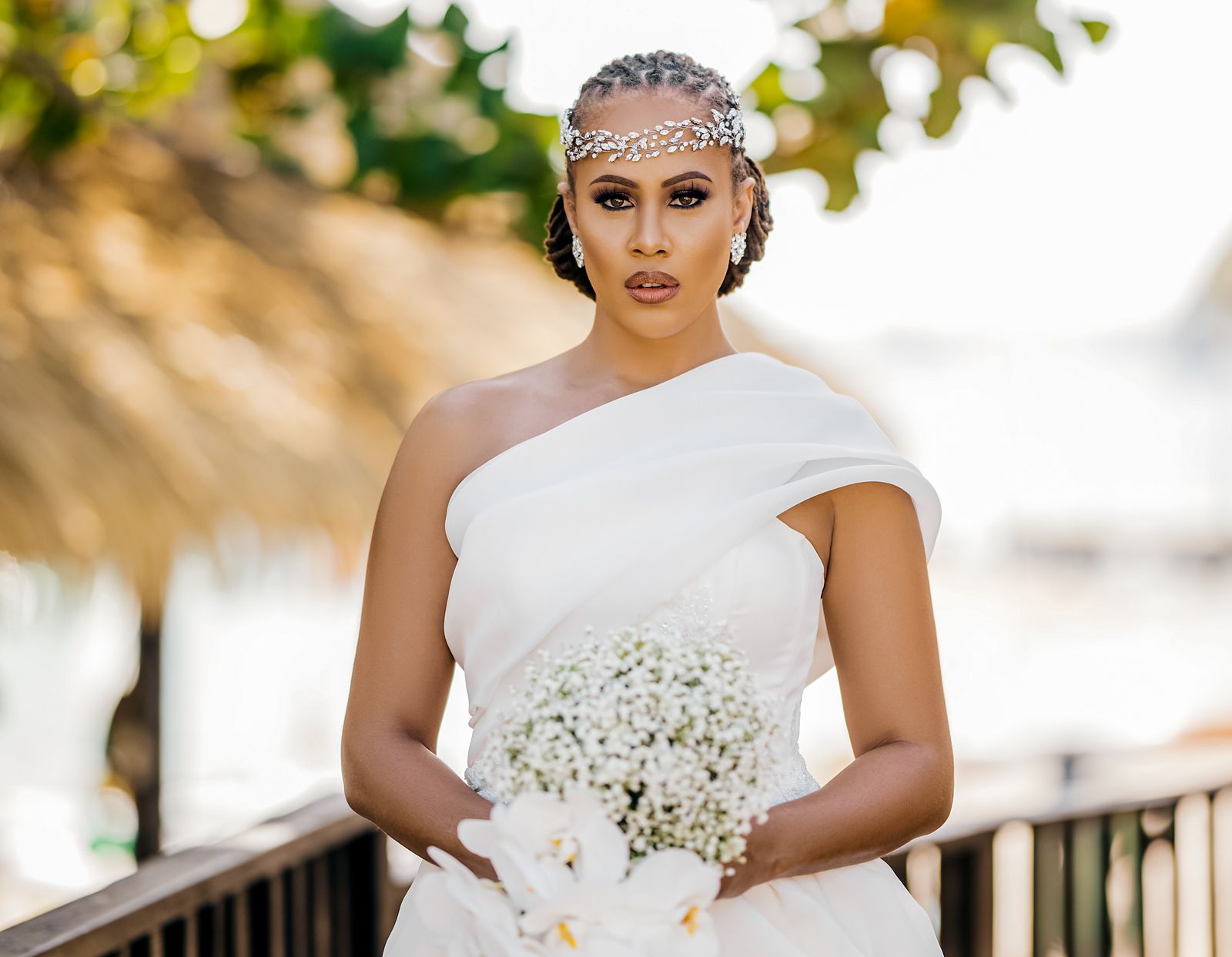 “It was so much better. You could sense all of this pure joy and love from our guests, our family, the staff, and the location. I can’t begin to describe it.”
That’s the power of the love bubble.

About 90 minutes after “I do,” the Caribbean sunshine disappeared on the other side of the Caribbean Sea, leaving behind another indescribable scene. That’s when the music started and Patrice looked into the emotional eyes of her father.

“Her father is in his late 80s and sometimes has to work just to stand,” says Bobby. “So when the first song began, he lifted himself up and leaned on his little girl’s shoulder… and they danced. Right there by the ocean. As much as I wanted to dance with my bride, I didn’t want that moment with her dad to stop.”

It’s among a gallery of special moments that are forever printed in Bobby and Patrice’s minds. They’re still at a loss at how the Sandals wedding team pulled it off. They can only say, “We’d go through the same thing all over again if it led us to Sandals and moments like those.”

The first dance. The ocean. The beach. The smiles. The love bubble. The glass runway. The chapel. The awe. You don’t even have to close your eyes to picture it. 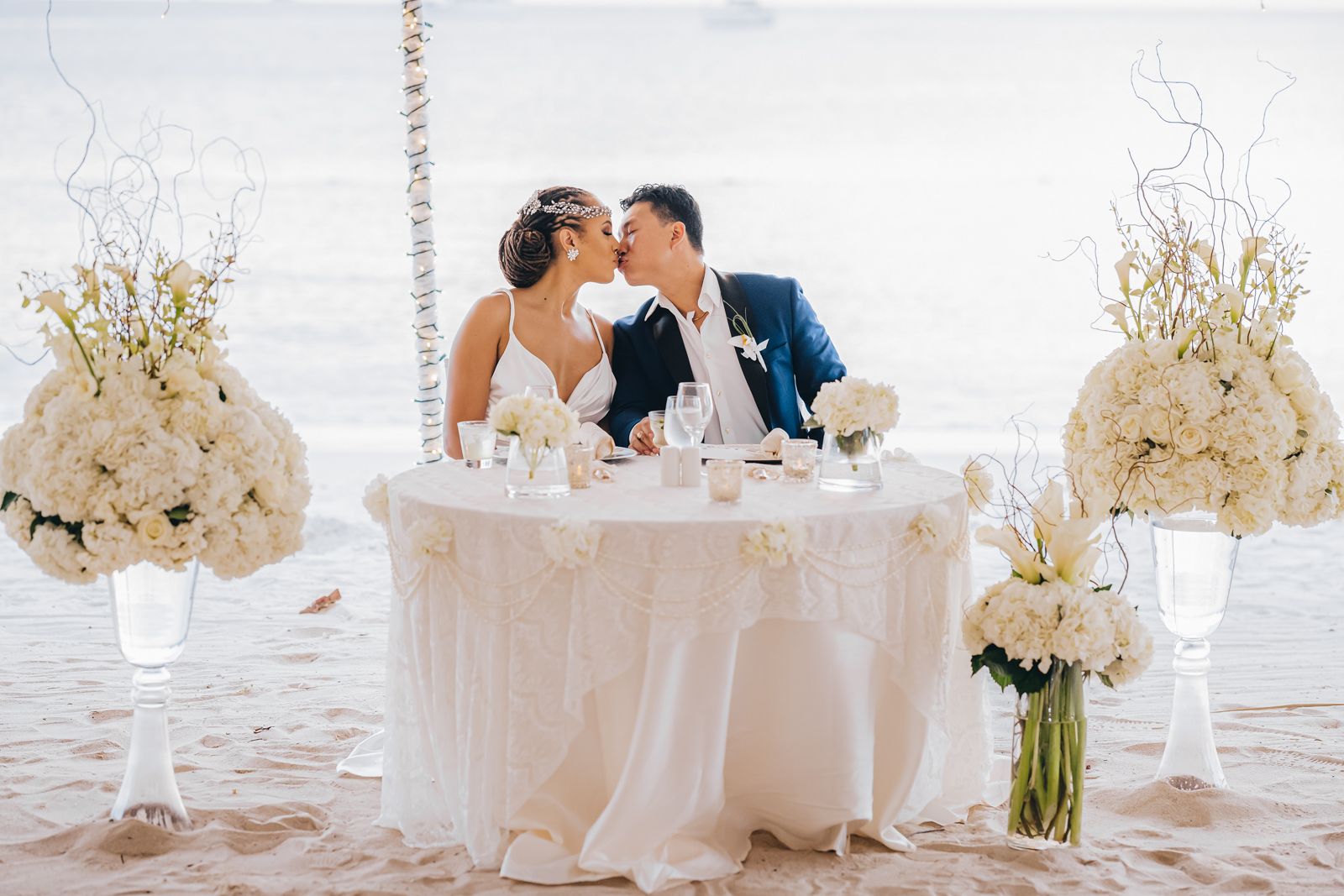 It’s a chilly February evening in the Southeast U.S., and Julie Parker says her husband, David, is out of character. “He isn’t one to use superlatives,” she says. But the topic of conversation has turned from dinner at the local s…

It’s a chilly February evening in the Southeast U.S., and Julie Parker says her husband, David, is out of character. “He isn’t one to use superlatives,” she says. But the topic of conversation has turned from dinner at the local s…