Sandals literally rewrote the honeymoon script for this couple by taking customer service to an unimaginable level.

It’s Friday morning, day four of JJ and Jillian Thornton’s honeymoon at Sandals Royal Caribbean in Montego Bay, Jamaica. They have just proclaimed it “the best morning of our lives.” It has surpassed yesterday morning. Wednesday now ranks as third best.

“Our honeymoon keeps getting better and better,” Jillian says. 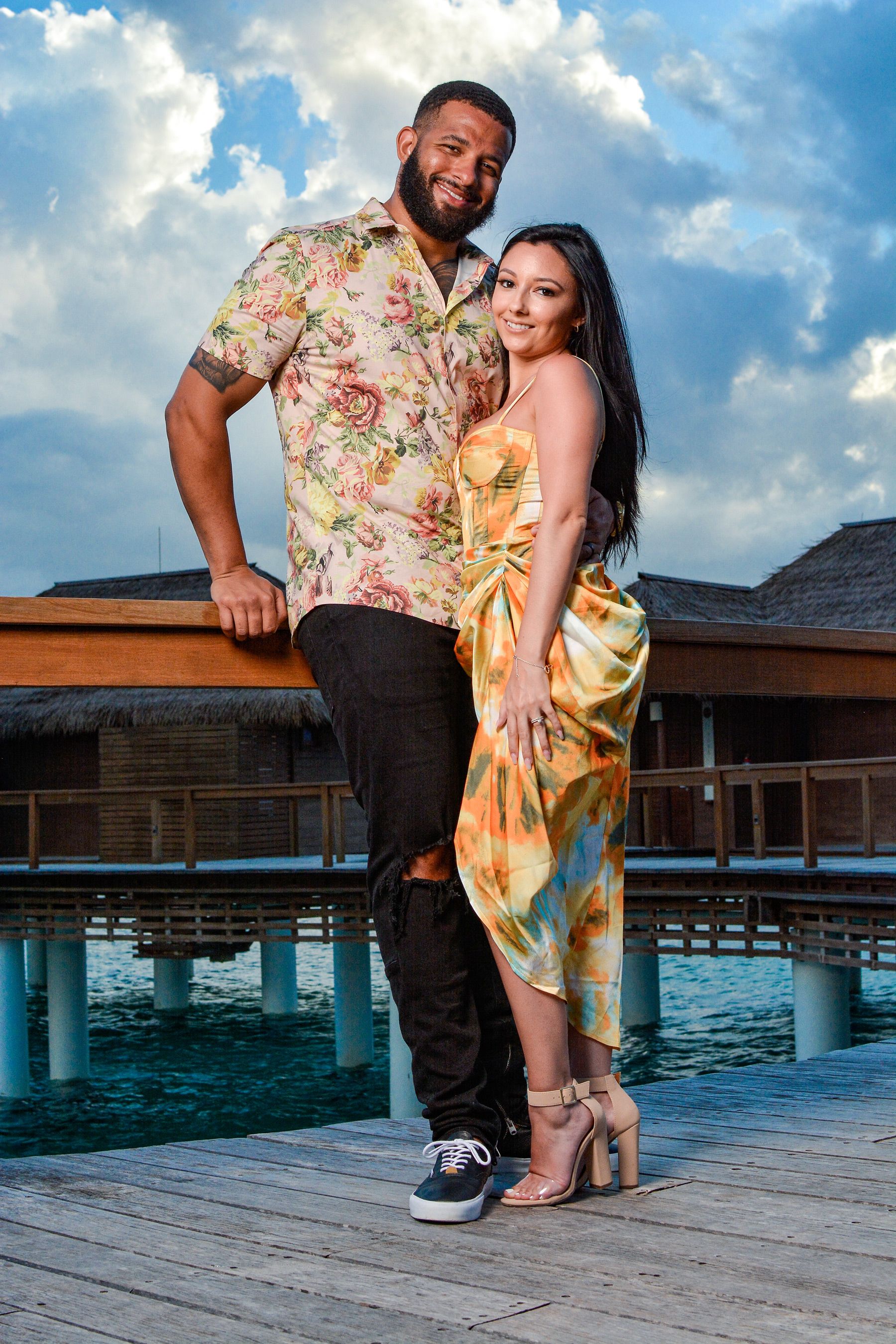 JJ and Jillian have barely moved today. They rolled out of bed, shuffled a few steps to a private patio lounger, and sat. This is how days begin when you wake up in an overwater bungalow with nothing between your eyes and the Caribbean Ocean, except maybe your toes.

How could the start of a marriage be any better than this? 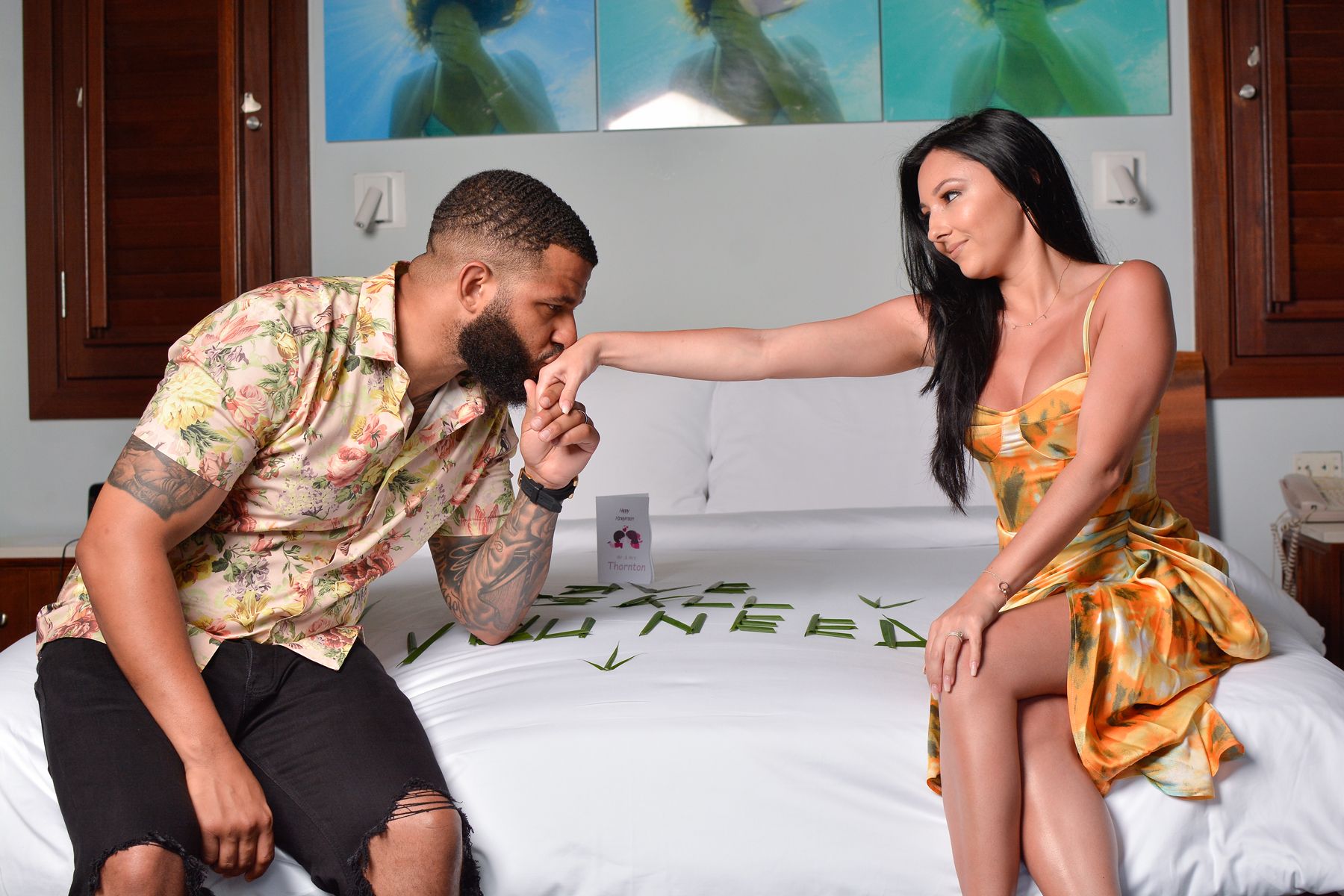 “Oh, hang on,” JJ says to a friend on the phone, “our butler just walked in. Thanks Jazzy. He brought us some cheese, crackers, and fruit.”

It just got better again.

This week the newlyweds have slept with their wall open to the sea. They’ve dined under the stars on Italian and Thai food. “It’s hard to pick a favorite because it’s all so good,” says JJ. They’ve enjoyed the entertainment of singers and dancers. They’ve soaked in a bathtub for two and melted in the hands of masseuses. They’ve talked about their new life together, with eyes on the horizon and feet on the white sand.

In a few minutes, they’ll jump directly off their patio into the ocean.

“It’s surreal,” says Jillian, “and not at all what we’d planned.”

Jillian and JJ started to plan their wedding and honeymoon in early 2020. It quickly became a difficult 12 months. COVID forced the wedding to be re-planned. Restrictions in southern California meant there could be no dancing and no celebratory gathering, which sounds like no wedding at all. Less than two weeks before the wedding, Jillian had to have gall bladder surgery.

“We decided we’re doing this,” says JJ. “We weren’t going to put off our wedding and honeymoon any longer.” 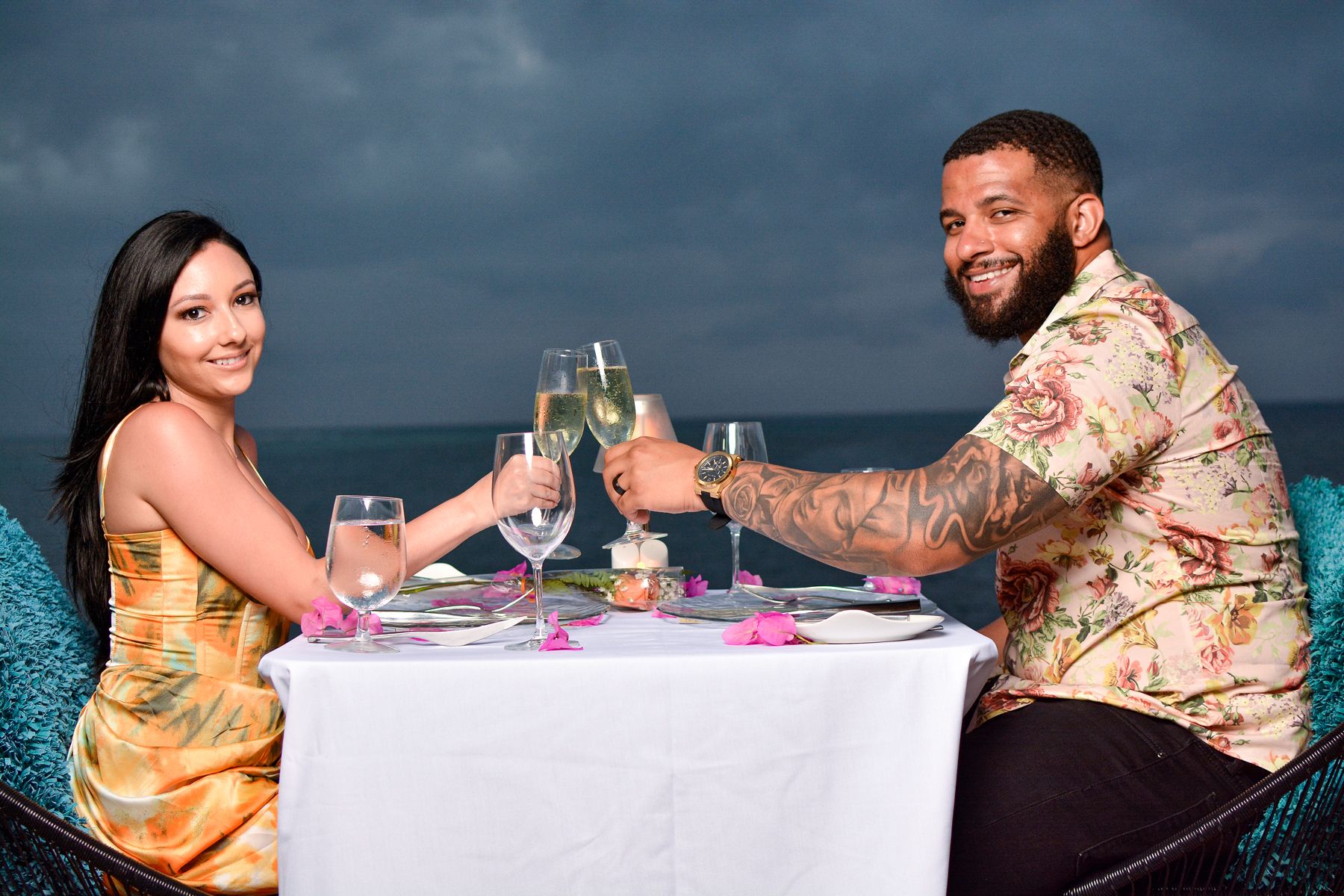 They knew that Sandals would be safer than their own neighborhood because of the Platinum Protocols of Cleanliness followed at each resort. Every touch point is sprayed and wiped constantly. Employees wear masks and gloves and everyone who steps on resort has to pass COVID testing.

“Someone said it’s like going to a COVID-free bubble,” says JJ. “Plus, you’re outside. I honestly couldn’t think of a better place to be.”

JJ was still helping Jillian out of bed three days before the wedding. The two could not wait to say “I do” and disappear to the Caribbean. So, a few days after the wedding, they took a redeye flight from Los Angeles to Miami, had a leisurely breakfast in the airport, and hopped on the final 70-minute flight to Great Exuma with only five other passengers. The sight of the gorgeous water around the Bahamas would be the first thing to take their breath away.

At the airport, JJ and Jillian grabbed their bags and headed outside for the smell of the omnipresent ocean air and a transfer to Sandals Emerald Bay. A cab driver saw them looking around and asked, “Where are you going?”

A few drivers broke into surprised expressions before one of them broke the news: “Emerald Bay isn’t open yet.”

JJ felt as if someone had squeezed the air out of him. It turns out, there had been a technical glitch with the online booking site he’d used. The resort would not be open for another three weeks.

“He was devastated,” says Jillian. “I felt awful for him.’”

The path to better started with a phone call to Sandals. “The mix-up wasn’t their fault,” says JJ, “but they assured us they’d make it all right for us.”

Within an hour, the General Manager of the resort, Jeremy Mutton, reached out to his network. The staff got busy. In the spirit of Sandals founder Butch Stewart, who had passed away less than a month earlier, the resort team was going to “exceed the expectations of the guests,” even if they weren’t expecting guests. 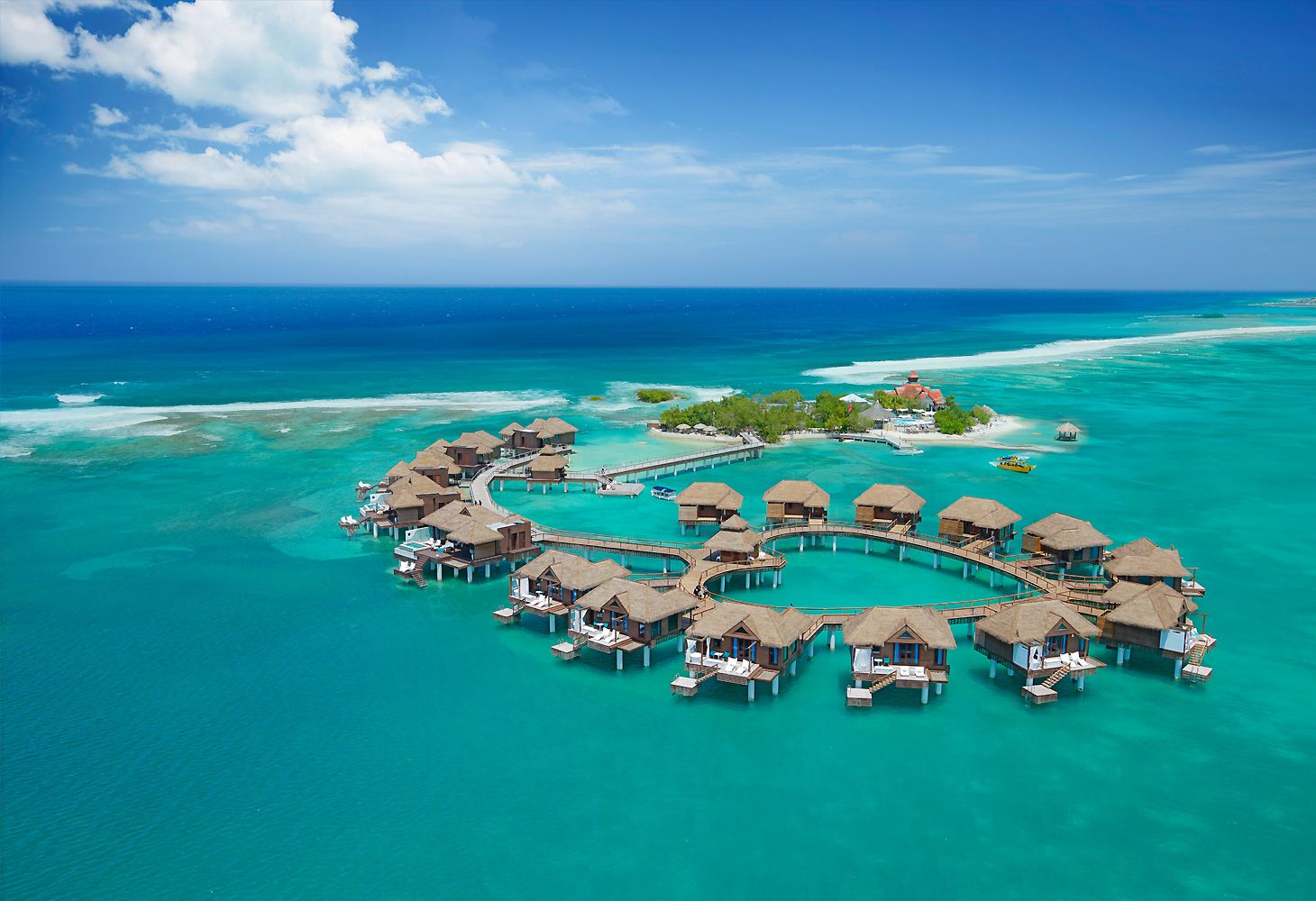 A short time later, JJ and Jillian were told they’d be staying in an overwater bungalow on Sandals’ private island off Montego Bay, Jamaica. It sounded impossible. Montego Bay is about 400 miles from Great Exuma.

“When we heard that,” says Jillian, “we looked at each other and said, ‘Yeah, right. We’ll believe it when we see it.’” 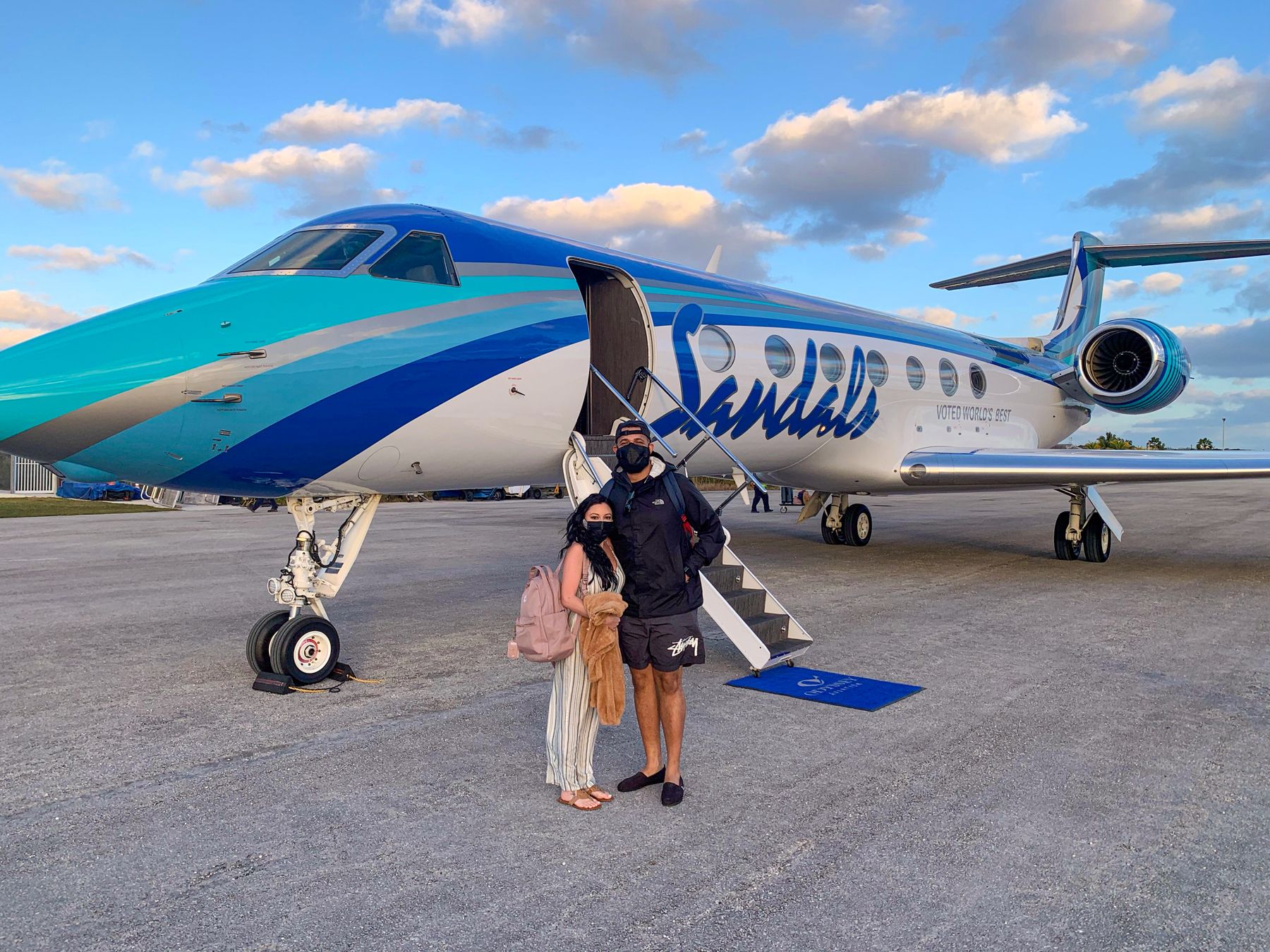 Sure enough, Jeremy took them back to the airport in Great Exuma. There on the tarmac sat a private jet, all warmed up and ready to fly with one other passenger: Sandals CEO Gebhard Rainer, who welcomed Mr. and Mrs. Thornton on board.

“I’m not sure how the CEO of the entire company made the time to come and fly with us to Jamaica,” says JJ. “He’s like everyone we met at Sandals: humble and genuine. And he cared so much about our experience that he gave us his phone number and said, ‘Don’t hesitate to call if you need anything.’” 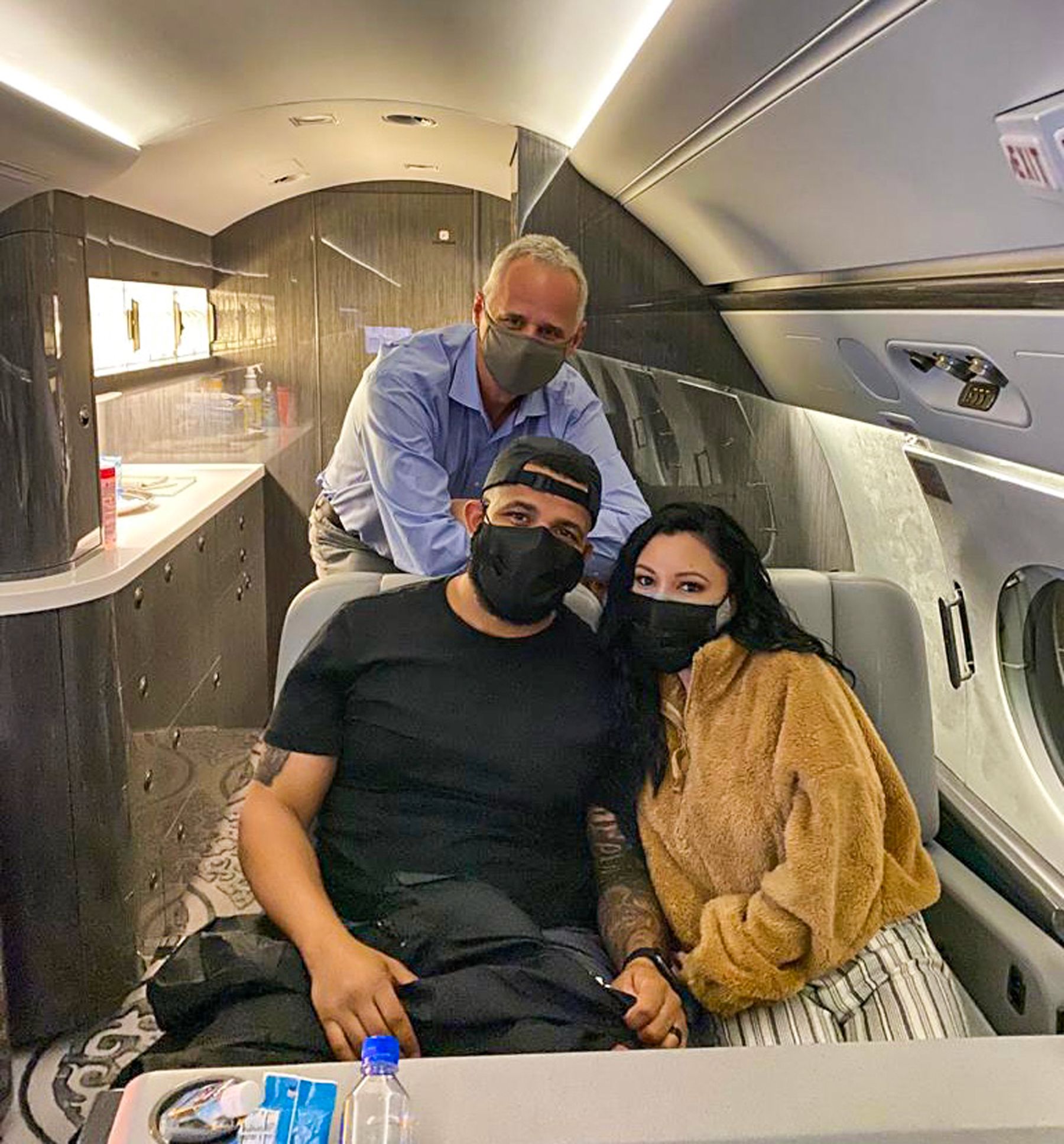 They wouldn’t need to call. Things got even better. At the airport in Montego Bay, JJ and Jillian saw a beautiful BMW waiting for them. Next to it stood Sandals’ Executive Chairman Adam Stewart, who is carrying on his father’s legacy and lifelong desire to treat people better than they expect to be treated.

“Adam promised us we were going to have an amazing time,” says JJ. “Just the fact he came to personally greet us, happily… who does that?”

A few minutes later, they came face to face with the sea. This time, they were led to a shuttle boat because the final leg of their journey was about to take them directly into “believe it when we see it.”

“We’d seen pictures of the overwater bungalows,” says Jillian, “but never thought we would ever stay in one.”

Their butler, Jazzy, walked them down the pier and opened the door so JJ and Jillian could cross the threshold into unbelievable. They looked down at a glass floor, walked into the spa-inspired bathroom, tested the hammock for two, and began a weeklong infatuation with the ocean and each other. 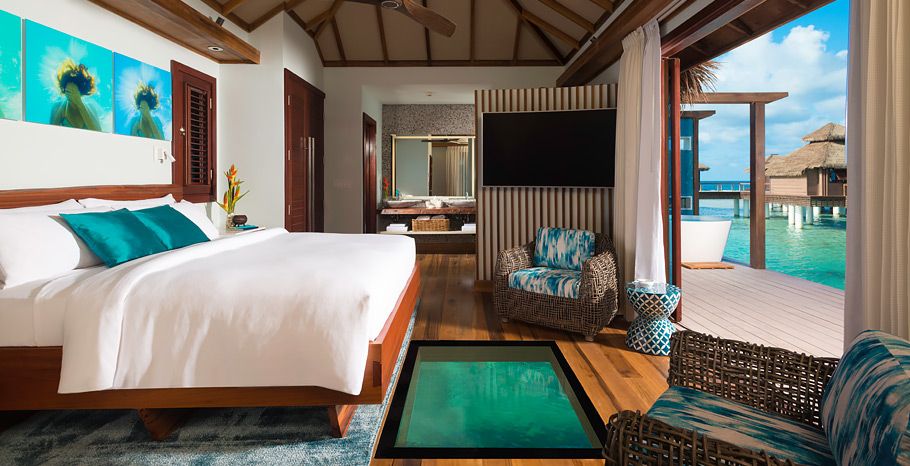 But the sunrise, food and swims in their personal slice of the Caribbean aren’t even the best part of the honeymoon.

“It’s the people,” says Jillian. “Every time we turn around, they’ve done something special for us.” There have been rose petals on the floor, warm bubble baths, bottles of champagne, and a perfect playlist of music. All from hosts who work like fairies, creating magical moments without being seen. 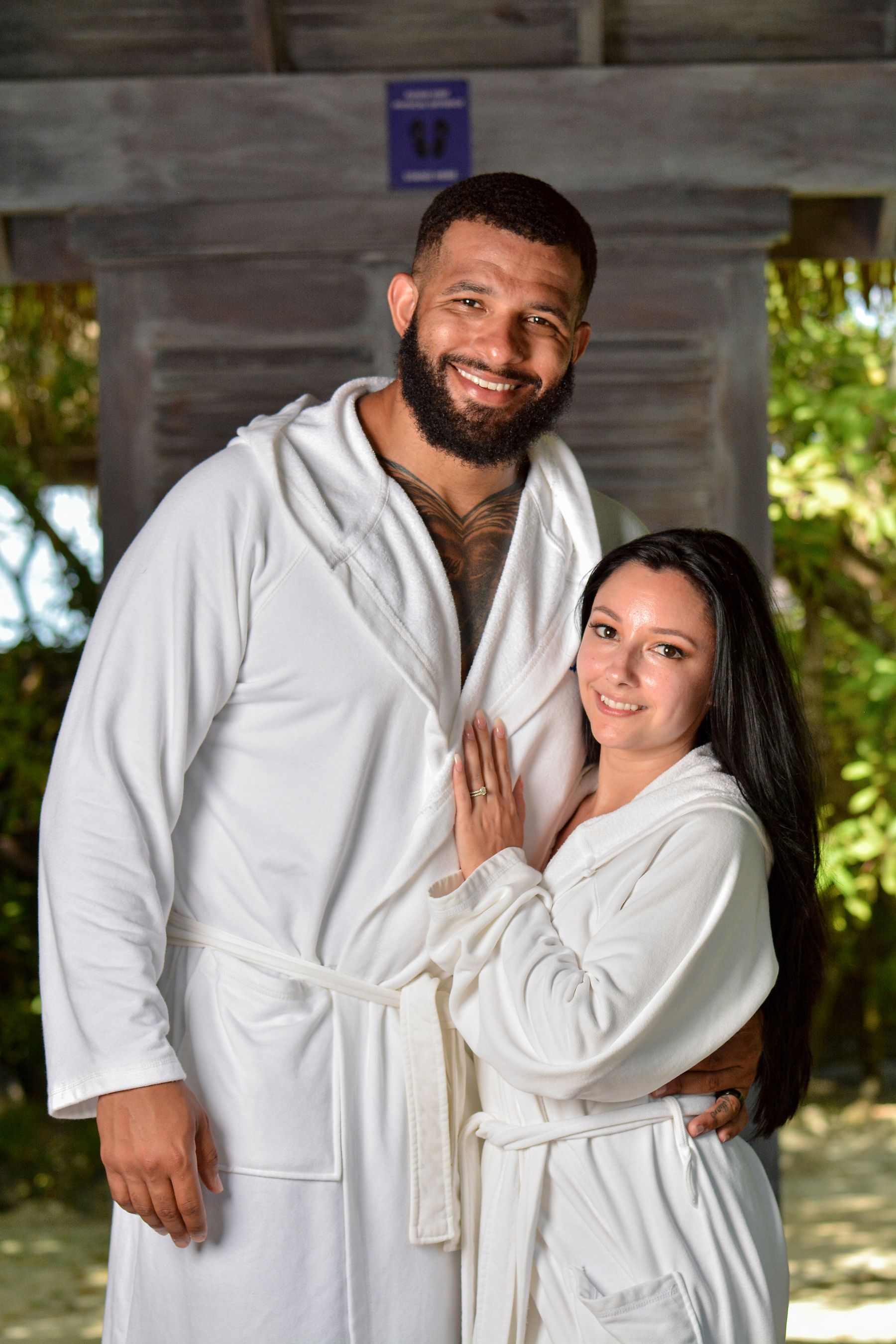 “They aren’t being nice because they have to be nice,” says JJ. “It’s who they are. This is how they treat everyone. We laugh. We talk. We’ve become friends.”
JJ and Jillian are thinking about getting another massage later. They’ll probably have a drink or two. Then, most likely, they’ll come back to their overwater suite and do absolutely nothing.

“For a year we had high expectations for a honeymoon,” says Jillian. “Despite everything we’ve been through, this has been way beyond anything we could have dreamed. I still can’t believe this is happening.”
And to think… tomorrow will be even better.