The Sandals Foundation Contributes To A Real-Life Sea Change

Just seven years ago, the people of two Jamaican communities wondered what was happening to their seacoast. So, with the help of the Sandals Foundation, they did something about it.

The sun is rising. The sand is freshly raked and oh, it feels good. My eyes and toes tell me this is going to be a spectacular day at Sandals South Coast in Jamaica. It starts with this beach walk under palm fronds and past sleepy overwater bungalows. The bungalows weren’t here when I last visited (you had to go to Tahiti for that).

Come to think of it, neither was this Dasani-clear water or the plush turtles I saw in the gift shop yesterday with notes about helping the Sandals Foundation “fund the sanctuary” and keeping the sea healthy “for generations to come.”

But a sanctuary is a lot more tangible than a touchy-feely conscious. You can’t tell from the beach exactly where the marine sanctuary begins or ends or if it’s anywhere near this flour-soft beach. To see it, or more importantly, to see the impact of it, I schedule a ride.

It’s a short one, around several churches, through the town of New Hope (how appropriate), and into Whitehouse — the very picture in your mind when you think of an island fishing village.

On this morning, ladies are selling snapper fresh off the wood boats that rest at the edge of the sea. Beyond the boats are aqua colors synonymous with the word “Caribbean.” The pace is pleasantly Jamaican and the vibe positively upbeat. It isn’t even 10 a.m. and the promise of a spectacular day has already been realized.

“It wasn’t anything like this a few years ago,” says a fisherman named Diego. He leads me to the shade of a blue building — the Whitehouse Marine Sanctuary office. “I don’t know what the village would look like if we hadn’t changed something.” 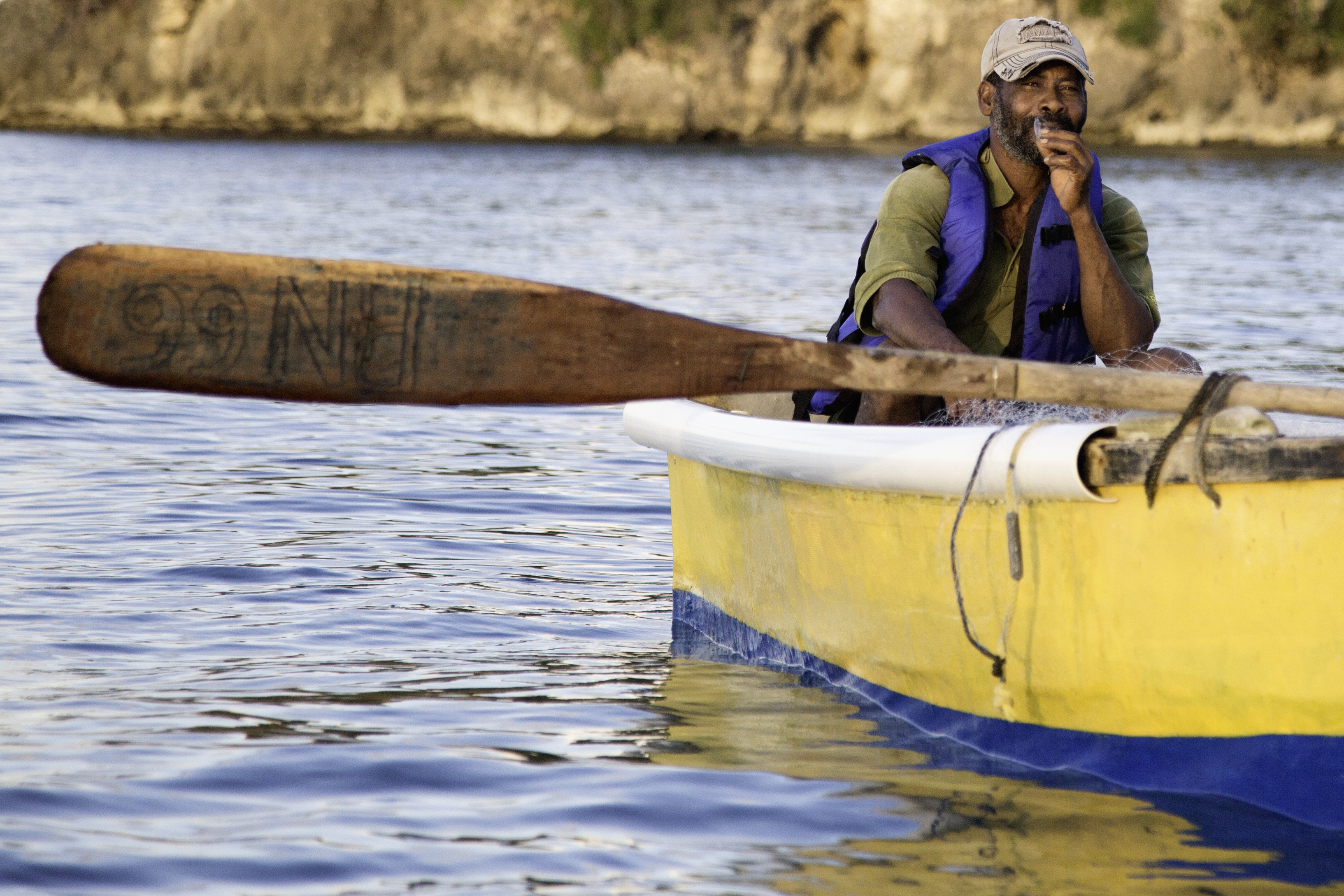 On one side of the building is the sea. On the other are two large containers neatly packed with plastic bottles and random trash. They serve only as bits and pieces of what has become a modern-day resurrection story. Here in Whitehouse the story is literally known as “the work of the Sandals Foundation.”

Diego and four other fishermen take turns telling me about the year 2012, when the fish had all but disappeared. For the people of the village, the sea provides much of their food. It’s the source of their business, their livelihood. All of it had slowly vanished. The seagrass, once as rich and bountiful as garden beds, was nowhere to be seen. Neither was the coral reef, which had been buried under so much algae that the water that was no longer very … Caribbean-ish.

“As a kid, I remember seeing white sand all the way out to the reef,” says Aston, who started fishing for a living 34 years ago. “But then it started to turn green and brown. There were times I’d go days without catching anything.”

Like most people in Whitehouse, he thought the phase would pass and the fish would return like prodigal sons. They didn’t. Neither did visitors wanting to go snorkeling. “Why would they want to go out and see algae?” says another fisherman named Xavier. Remember, this isn’t a place where sea life simply makes great Instagram posts. It is the heartbeat for the community.

“My father is a fisherman and my mom sells fish in a shop over there,” says Diego, pointing out the window. “In good times, she’d need five fishermen to supply her shop with fish. It got to be where it took 10 or 15 fishermen. We didn’t know what was going on.”

Team members at the Sandals Resort up the coast were among those wondering what had happened. Many of them live here in Whitehouse. Even at the resort, you could stand on the beach and see something wasn’t quite the same. So, in 2012, local ambassadors for the Sandals Foundation opened a conversation.

“They listened to us and said they could help us turn things around,” says Diego, “but it would take time.”

Around this same time the Foundation team was helping to initiate a comeback on Jamaica’s north shore, in Boscobel. The backstory there sounded familiar. A fishing community had simply taken full advantage of what nature had given it for decades … until nature could give no more. With no parrotfish to eat the algae, the reef had changed from shades of Crayola to shades of a number-2 pencil.

The Foundation partnered with fishermen and community leaders in Boscobel and with government officials to create a long-range game plan. It would take all of them to help protect the area around and inside the reef. The message: Give the fish a reason to return. Be patient.

Easy to say. But try to convince a fisherman living day by day to give up his favorite spots, to invest time and expenses going to deeper water, and to let the reef heal. Tell him it won’t be all better by next weekend or in three months. Give it a couple of years.

In essence, all the Foundation could say to the people in Boscobel and in Whitehouse was, “Trust us.”

“The reason we listened to them,” says Terrell, another fisherman in Whitehouse, “is because we knew they’d been helping around our community — at the school and at the hospital.”

Some of the fishermen had dental and vision work done at free clinics, thanks to the Foundation’s support. “They weren’t some organization coming in with their own agenda, without regard for our culture and our needs. They wanted to help for the long-term good of our community.”

The Foundation made another move that turned the tide: they hired Whitehouse’s fishermen. The fishermen who knew the environment better than anyone would be the ones planting the coral, picking up trash, and educating the community. Xavier, Aston, Diego, Ainsworth, and Terrell became faces of environmental consciousness in their own neighborhoods and at the docks.

They went to Boscobel to find out what was happening there. They also took a longer field trip to Belize to see with their own eyes how patience with a marine sanctuary can bear stunning results.

“We were inspired to protect what is ours,” says Diego.

Yes, there were the occasional confrontations with fishermen who didn’t want to leave the sanctuary. But after about 18 months, any debate came to a stop.

“We’d just point to the water and say, ‘Look,’” says Diego. “When we’d take them snorkeling, you could hear people say, ‘Wow, it looks like it did when I was growing up!” 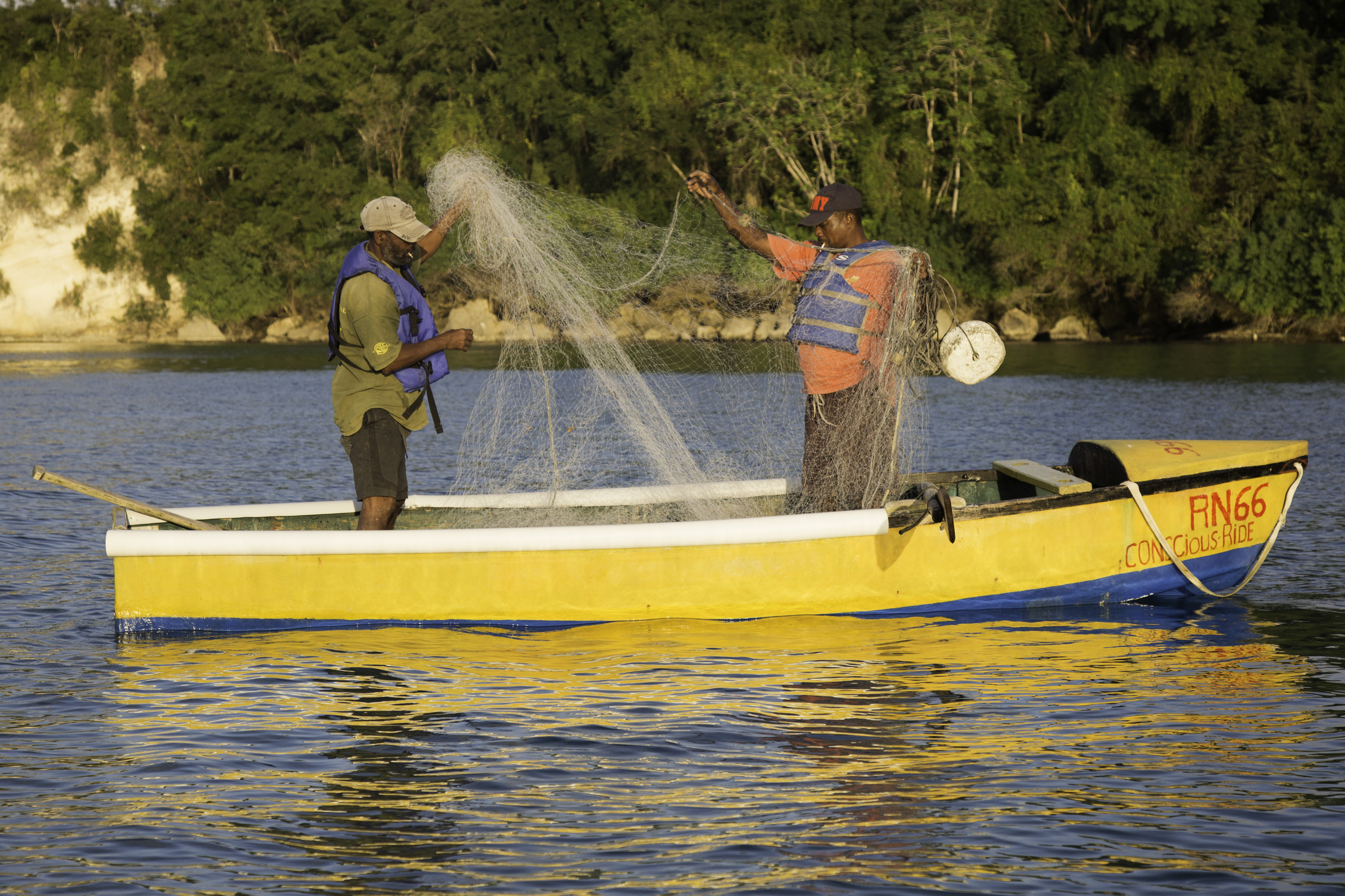 The micro-economy in Whitehouse is warm again. Snorkeling guides are booked. There’s so much action at the docks that the Foundation started supplying free ice and refrigeration (solar-powered), saving the fishermen and vendors thousands of dollars.

And then there’s the kicker: the fishermen who were most resistant to change are now asking for the sanctuary to be expanded — to keep the environment healthy for generations to come.

The next generation is already diving in headfirst near the north coast, at Iona High School, about 10 minutes from Boscobel. Classes ended 30 minutes ago, freeing students for the weekend. But 15 of them have stayed to lean into a Save Our Seas presentation from a Sandals Foundation team.

I’ve seen the classically Caribbean water colors from a balcony at the nearby Beaches Resort. But the most telling transformation is right here, inside a warm classroom full of teenagers who should be shedding their backpacks and snacking on coconut drops at home.

Around the island it’s customary to hear kids talk about being the next Usain Bolt or Bob Marley (still). But during this Q&A, a 15-year-old student named Rojae raises his hand, nods toward another student in the room, and says, “Romeo and I plan to go to college and become marine biologists.”

College and careers will be here soon enough. But tomorrow is Saturday. And this is the Caribbean. There’s the promise of another spectacular day. So Rojae and Romeo have a short-term plan, too: they’ll go for a swim in the world’s prettiest sea.

Antigua and sister island Barbuda together make up a Caribbean nation in the northeastern Caribbean Sea. Antigua is to the south, and Barbuda is to the north. These islands are located east of St. Kitts and north of Montserrat. Th…

Never A Dull Moment In Ocho Rios Jamaica With These Amazing Things To Do!

Cover image credit: Nazar Skladanyi/Shutterstock.com If you're reading this post, you’ve likely got Jamaica on your mind. You might even be close to, or already leaning in the direction of Ocho Rios (north coast of Jamaica) as the…

Spark Some Passion In One Of These Cozy Sandals Rondoval Suites

Antigua and sister island Barbuda together make up a Caribbean nation in the northeastern Caribbean Sea. Antigua is to the south, and Barbuda is to the north. These islands are located east of St. Kitts and north of Montserrat. Th…

Never A Dull Moment In Ocho Rios Jamaica With These Amazing Things To Do!

Cover image credit: Nazar Skladanyi/Shutterstock.com If you're reading this post, you’ve likely got Jamaica on your mind. You might even be close to, or already leaning in the direction of Ocho Rios (north coast of Jamaica) as the…

Spark Some Passion In One Of These Cozy Sandals Rondoval Suites