Inside the Grand Opening of Sandals Royal Curaçao, Where Amazing Comes Together

It’s a question you have to ask. For 40 years, Sandals Resorts has continually re-imagined the luxury Caribbean experience. Every catchphrase has been used in an effort to describe the innovations as they’re rolled out — all of them true. Sandals has changed the landscape, moved the needle, thought outside the box, and created all-new boxes.

So how, after 40 years of too-good-to-believe innovations, could Sandals possibly raise the bar even a fraction more?

On June 24th, Sandals raised it by a mile. 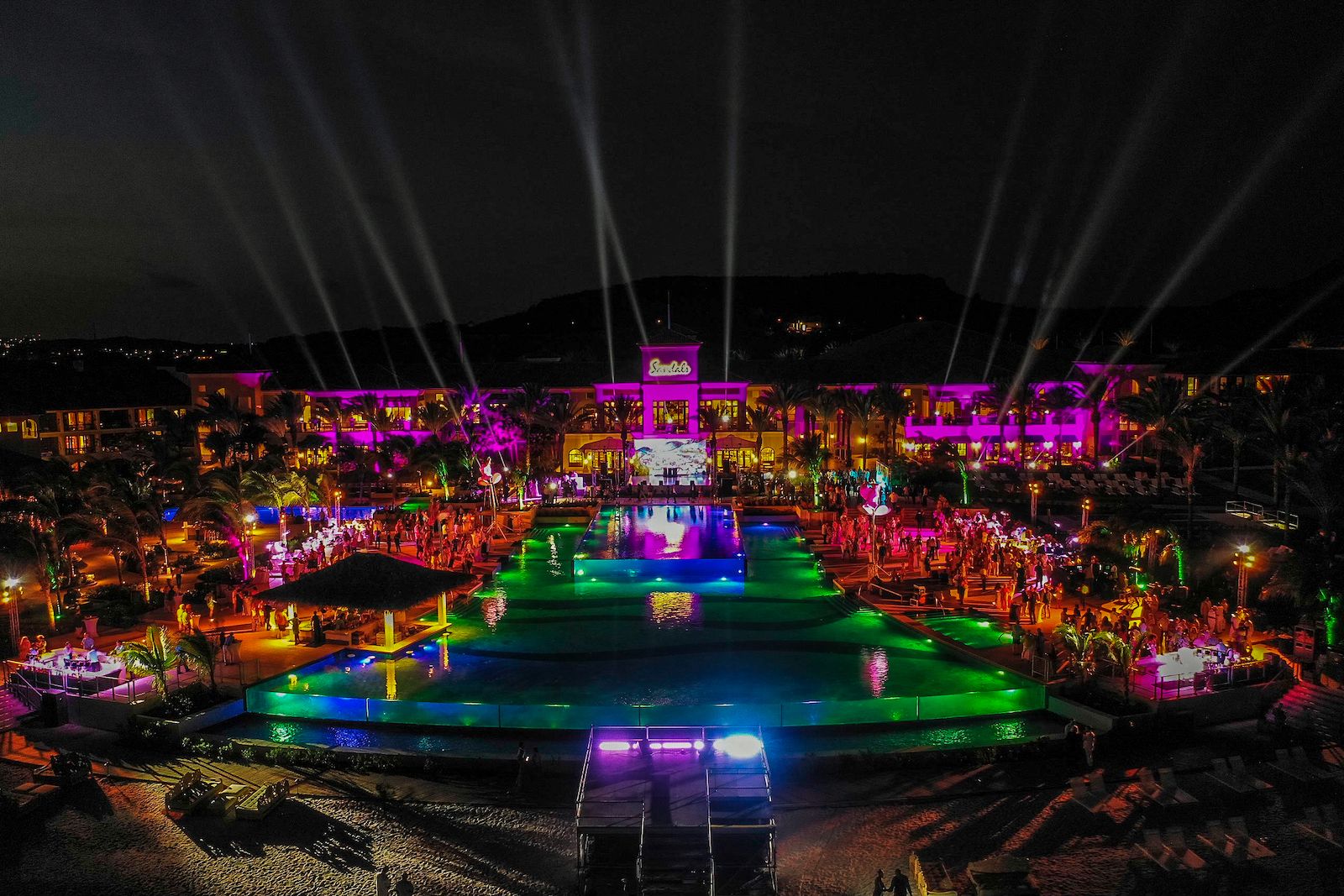 
The grand opening celebration of Sandals Curaçao Royal was literally unlike anything that had ever been seen – here or anywhere else. It’s no wonder. The celebration came as an exclamation point to a project that has been 10 years in the making, which made weekend livelier and sweeter than anyone could have expected.

But before the dancers, bands, and fireworks were set loose, the grand opening celebration began with an everyday occurrence on the most beautiful westward-facing beach in the Dutch Caribbean: the magnificent hues of a tropical sunset. On this evening, they happened to cast a glow over the all-new Awa Seaside Butler Bungalows and Kurason Island Poolside Butler Bungalows. It was as if the sun’s rays wanted to be first in line to welcome the 16th and newest property in the Sandals Resorts portfolio. The well-wishers came from everywhere.


As staff mingled with local dignitaries, and those dignitaries mingled with guests, and guests mingled with globally recognized entertainers, the sounds of a Kachu horn stopped everyone in their sandy footprints. Generations of Curaçaoans have heard the same sounds as pronouncements of important events on the island — births, bountiful harvests, and moments that demand a celebration. 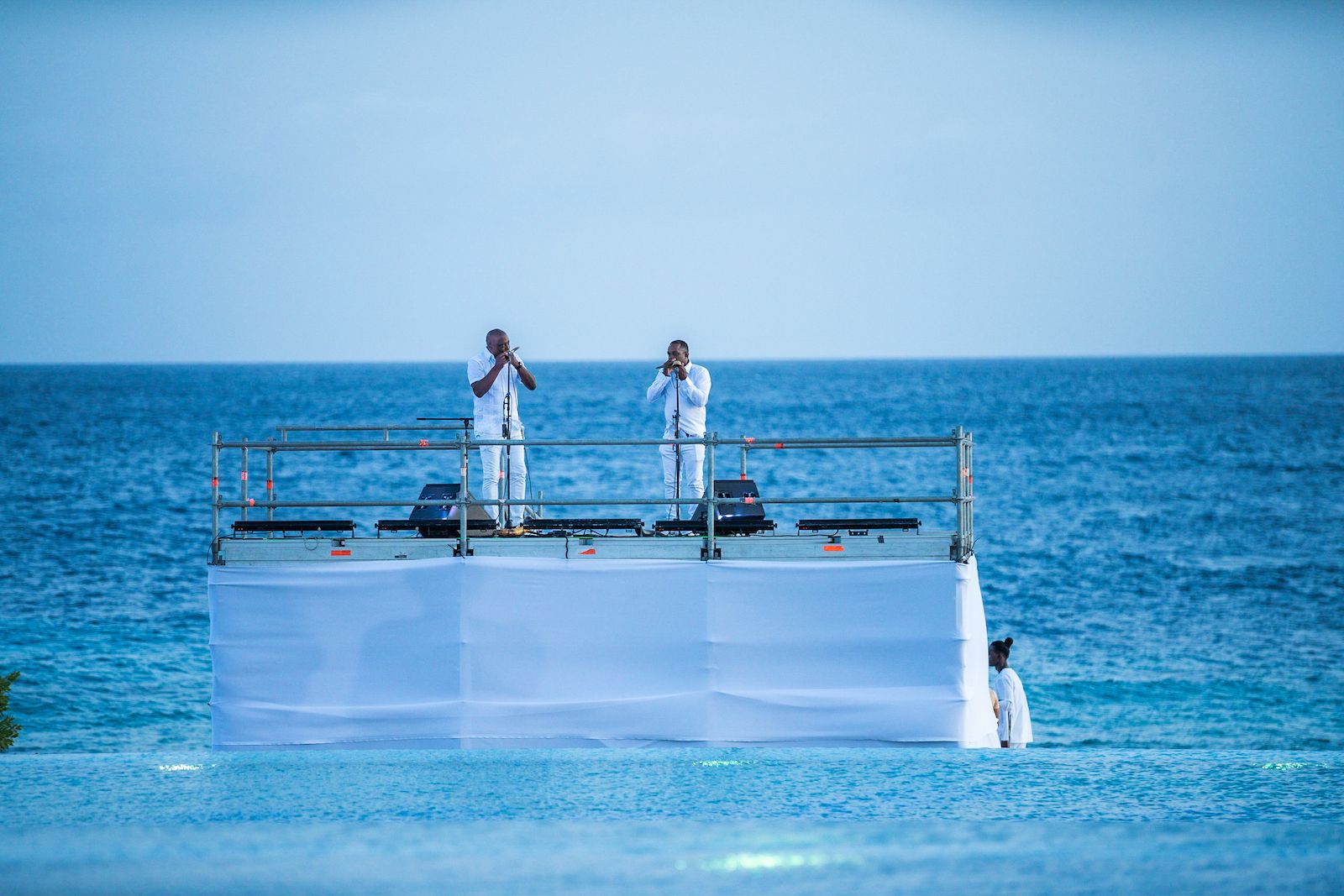 Pictured: The sound of the Kachu horn commemorates the sun set at Sandals Royal Curaçao.


The call of the horn drifted out over the all-inclusive resort, and out to sea. The anticipation in the tropical air elevated. Daylight gave way to stage lights. There, wearing a soft blue sport coat to casually align with the popular color of Curaçao, Sandals Resorts’ Executive Chairman, Adam Stewart, spurned the use of a script and spoke his final words from the heart.

“We’re going to put on one crazy party for you to celebrate 10 years in the making. Have the time of your life. Welcome to Sandals Royal Curaçao.” 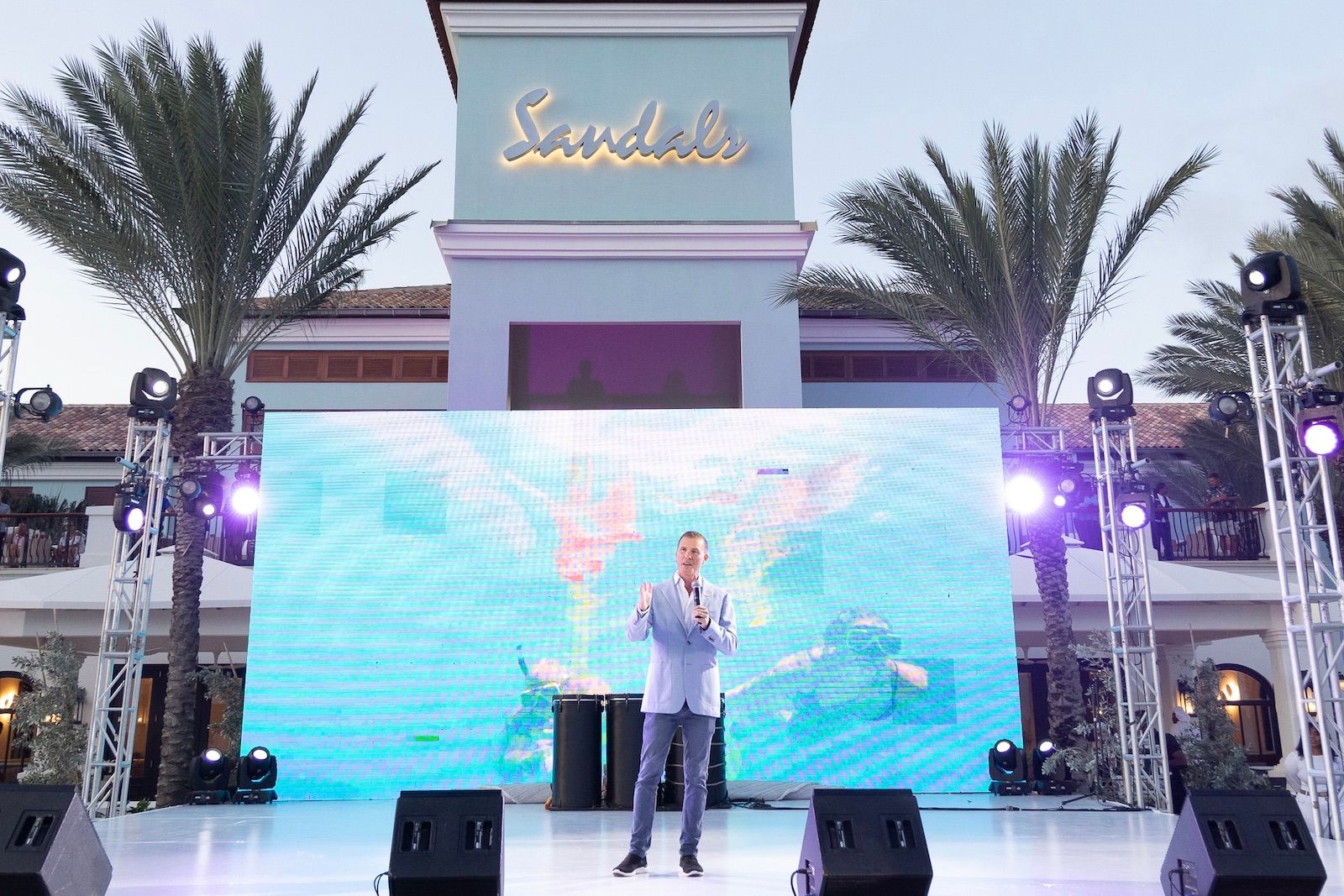 
And that kickstarted the resort’s tagline, “Where Amazing Comes Together,” into a before-your-very-eyes celebration of culture, colors, and the return of Carnival to the island for the first time in three years. It took a decade to dream up this all-inclusive resort in Curaçao. It only took a matter of hours for people to live the dream on this beachfront 44-acre swath of Curaçao. 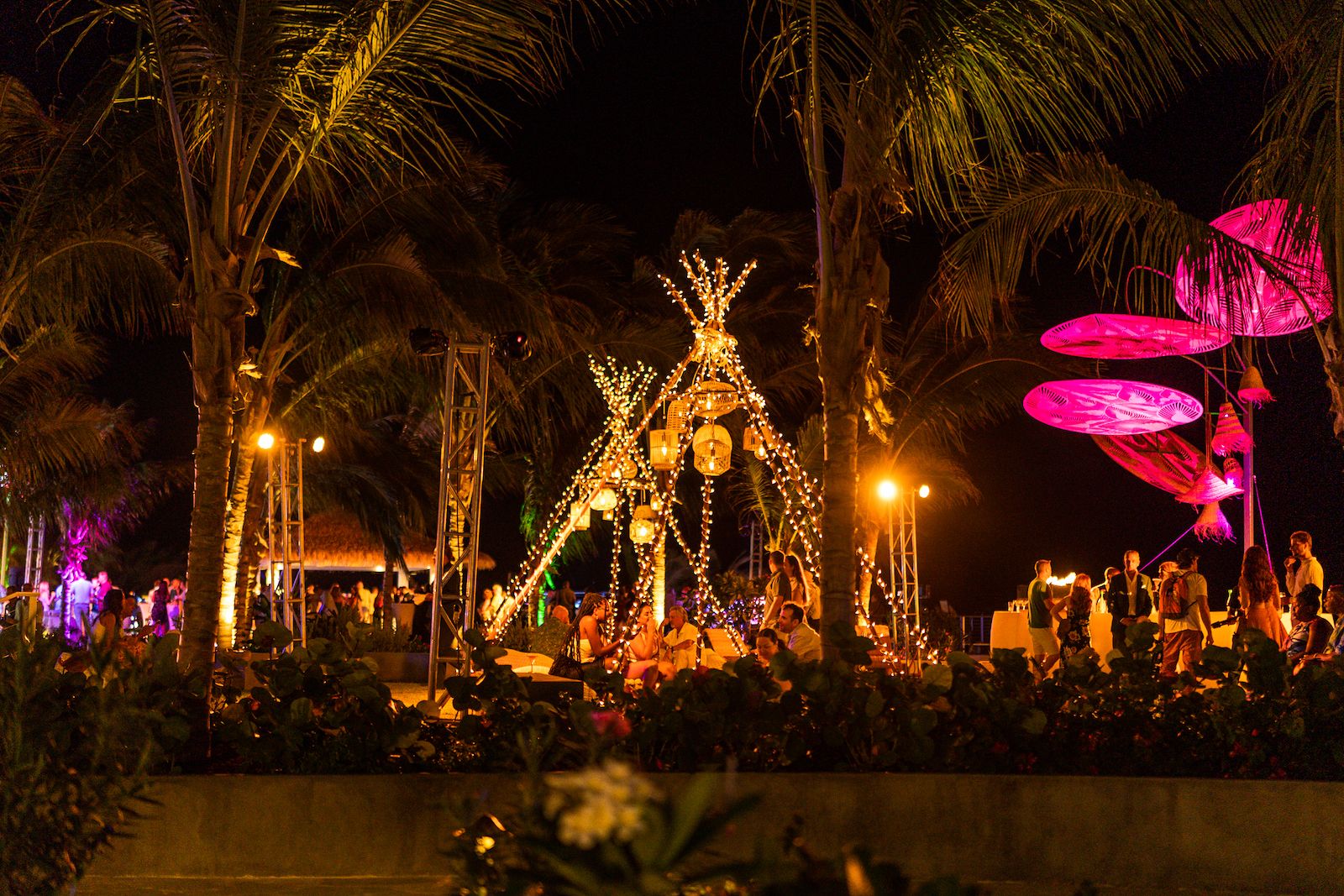 
Iconic steel-pan artists coaxed guests into rhythmic movements, some of them into the direction of a first-of-its-kind cocktail bar reminiscent of the island’s iconic Divi tree. Guests looked skyward to Sway Performers moving like palm trees on towering 20-foot-high flowers. 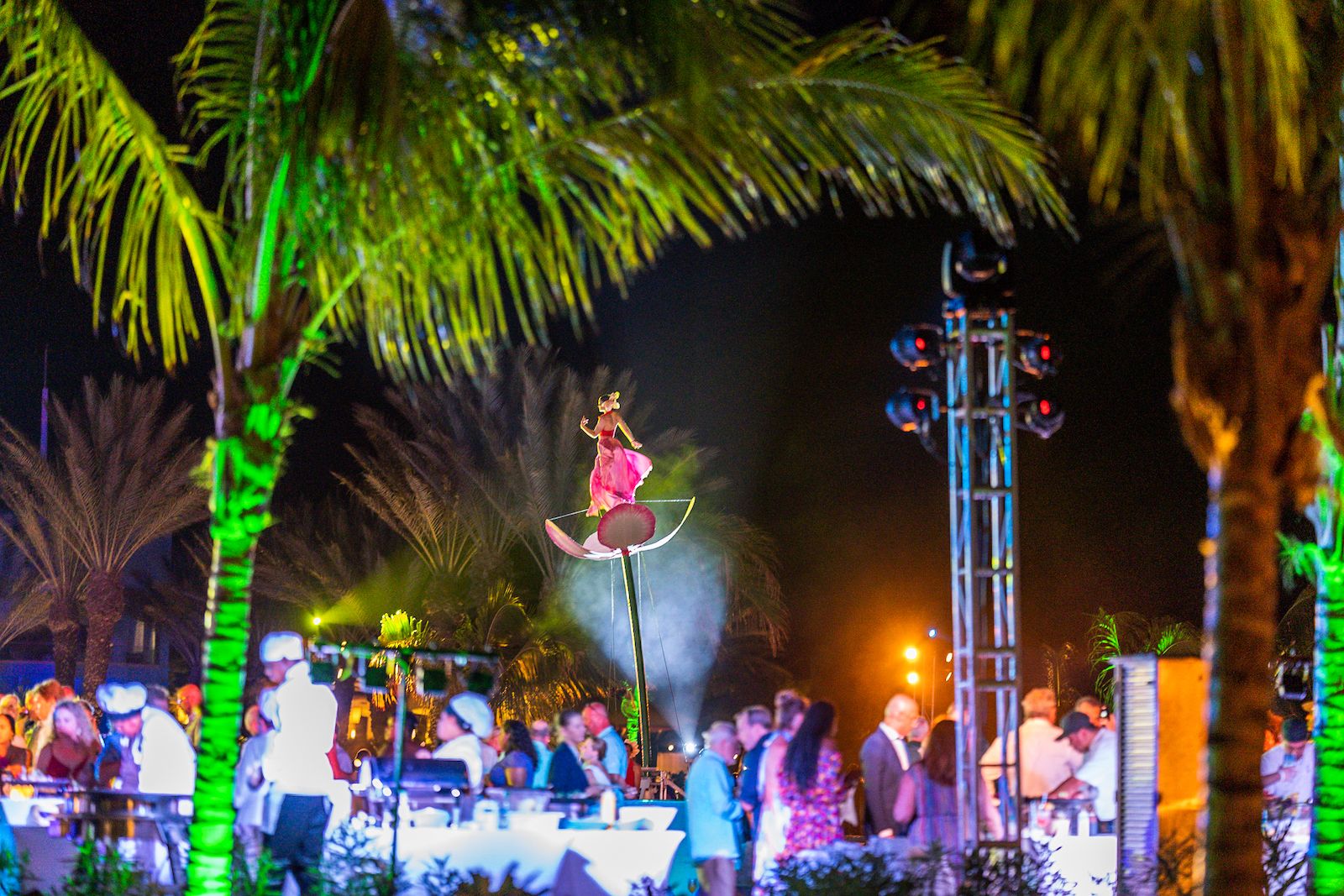 Pictured: Sway Performers swooned guests from a towering 20 feet in the air.


Steel pans by the local legend, Konkie, and accompanying band, The Guayaberas, gave way to mashups between drummers, DJs, and renowned violinists CJ Opus and Clari Montergo. Tunes by Caribbean music producer extraordinaire, DJ Menasa, were met by the iconic sound of Nelson Braveheart’s saxophone, with pop-up acts from cultural performers from Folkloriko Ambiente Kultural. The fiery hues of the sunset were brought to life by the Phoenix Curaçao Theatrical Fire Show, mesmerizing the audience with spectacular dance choreography and elaborate costumes. 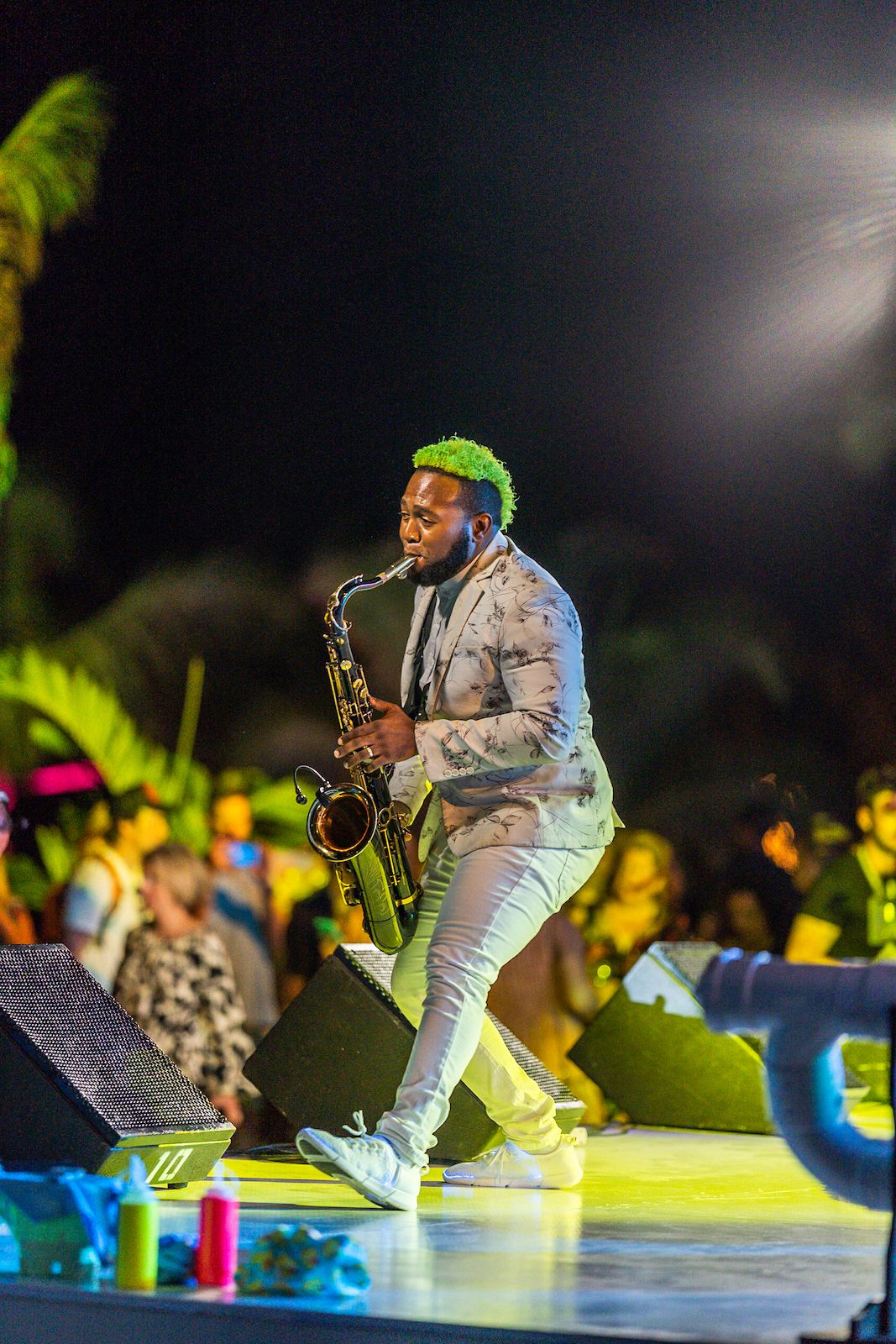 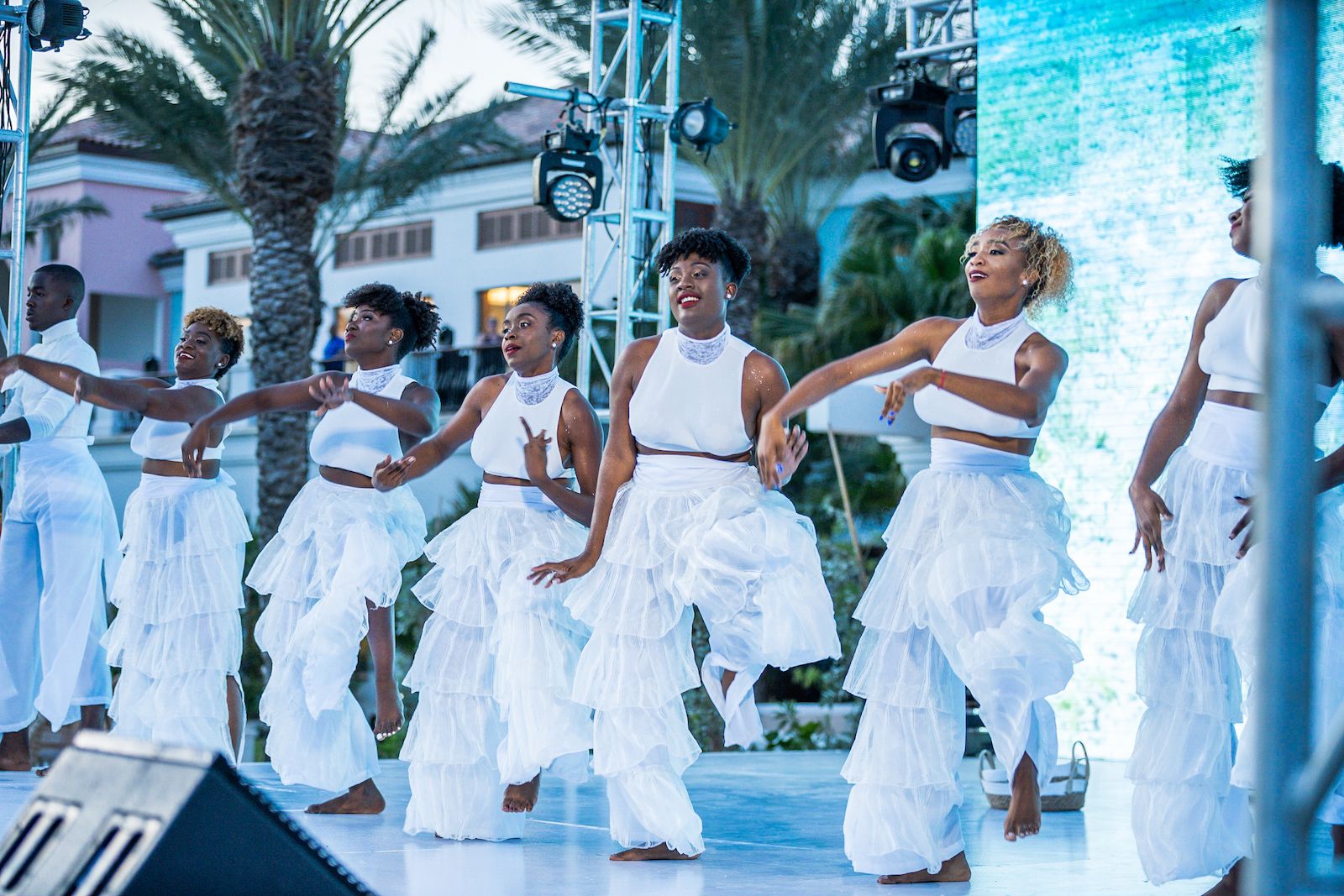 
Every moment during the celebration, down to the blue-colored drinks and diversity of performers, signified the long-awaited marriage of Sandals and Curaçao. To introduce the bi-level Dos Awa Infinity Pool, which overlooks the sea from two levels, guests saw a first-of-its kind synchronized swimming routine from Curaçao’s Swordfish Synchronized Swimming Team. 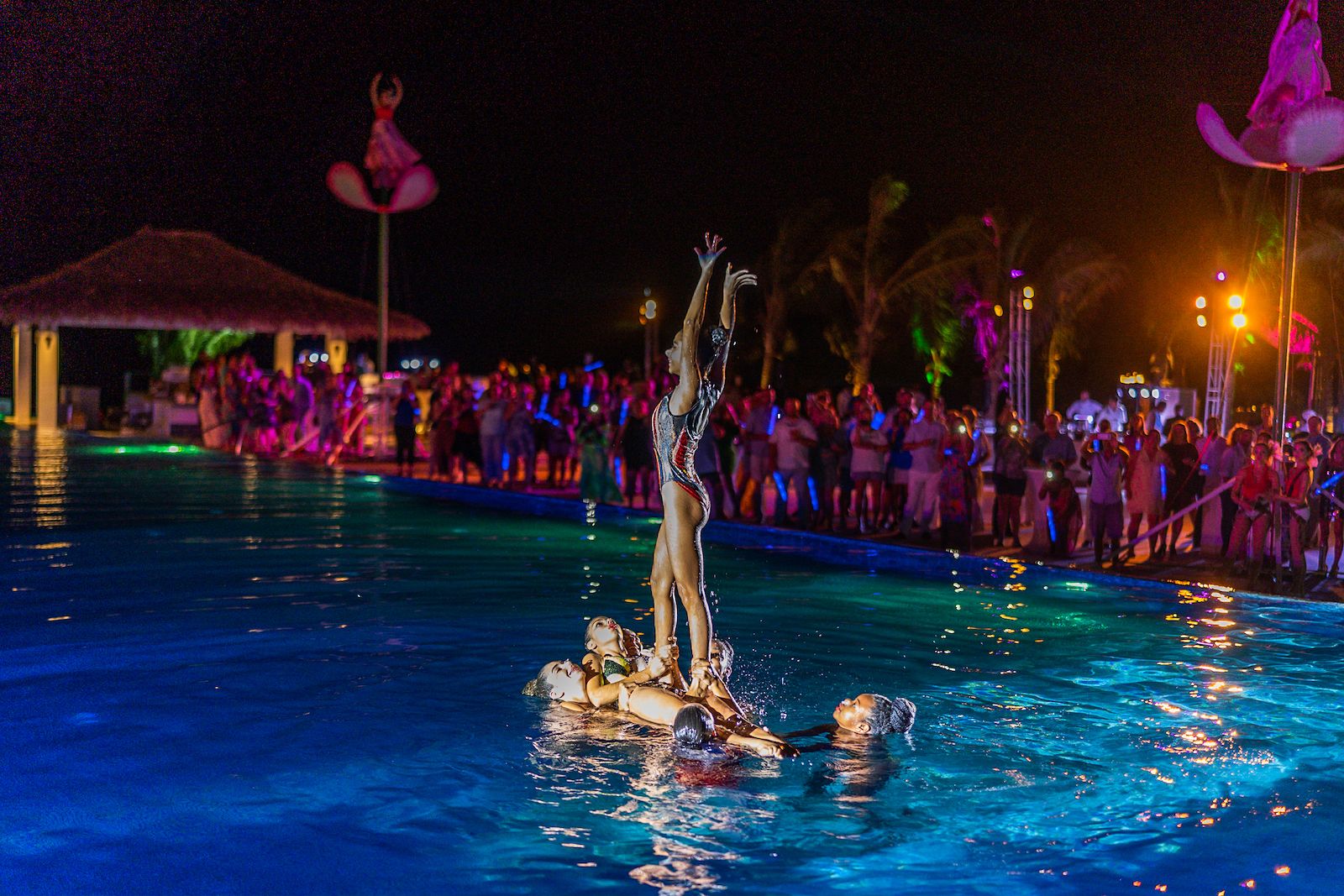 
The stars emerged, overhead and at eye level. Fashion designer Stan Herman has seen just about everything at worldwide showcases during his illustrious career. He’d come for the unveiling of the new Anniversary Collection of uniforms he curated for Sandals Royal Curaçao. On this night, though, he stood in complete awe of the never-befores on the resort property around him, all the while beloved Dancing with the Stars couple, Jenna Johnson and Val Chmerkovskiy, made their rounds through the party and the dance floor. 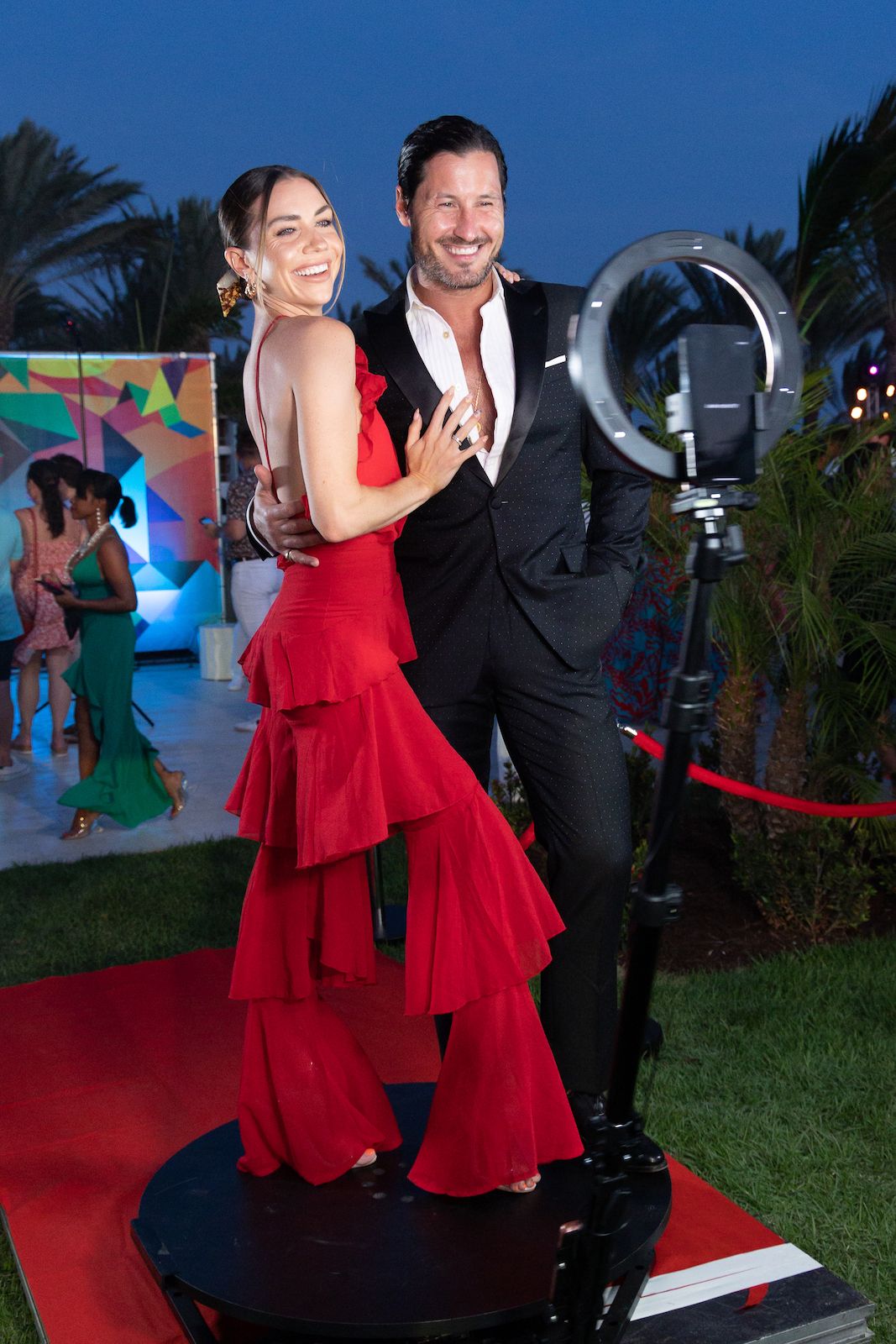 
The pure Curaçao energy would have made Vegas blush.

Just when the energy couldn’t possibly be lifted any higher, a global phenomenon managed to shift all attention back to the stage: Blue Man Group. The trio’s powerful drumbeats and spectacle of paint was chosen as a headliner for good local reasons. Their flourish of blue ties to what many consider the most colorful island in the Caribbean. 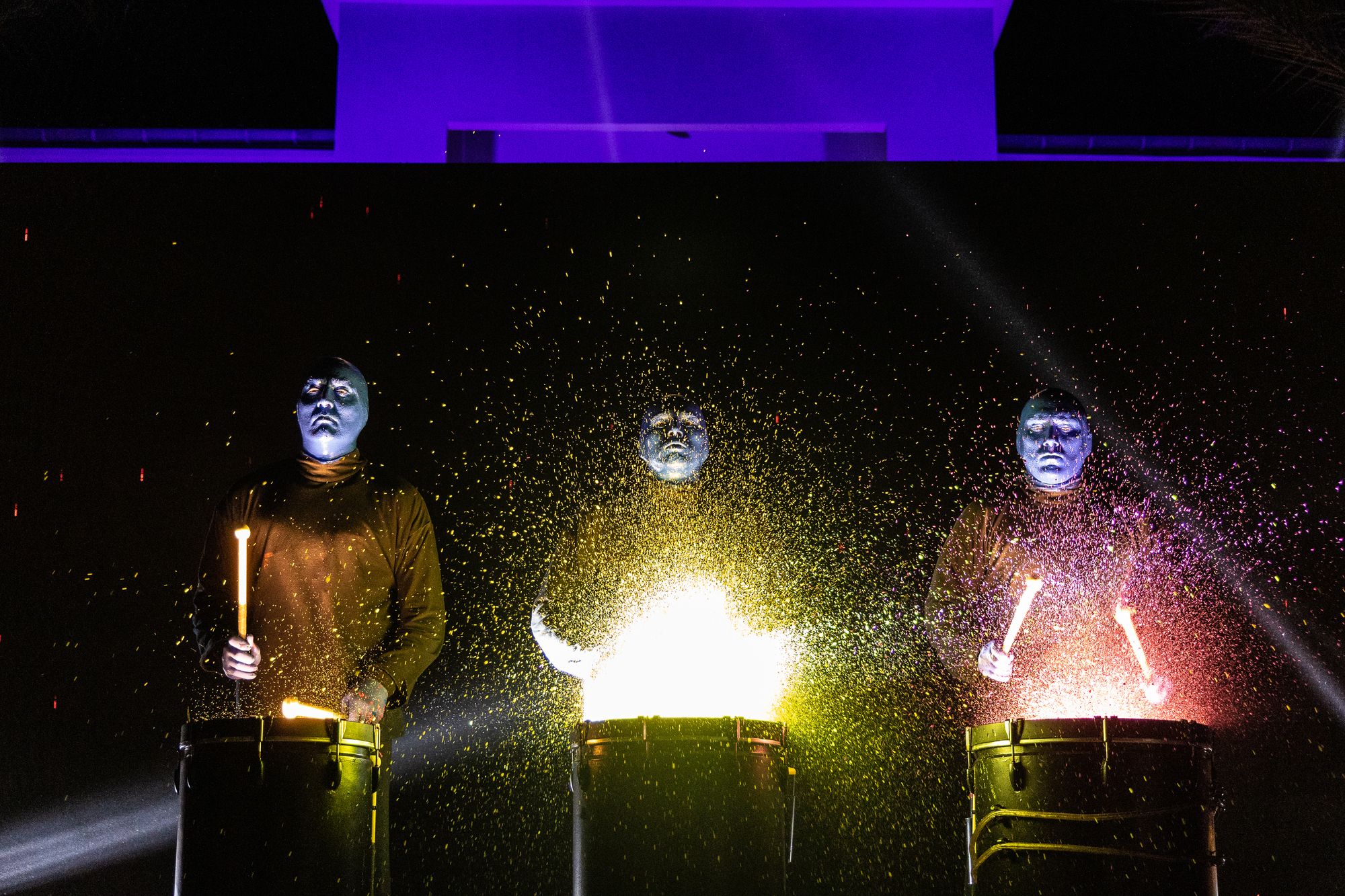 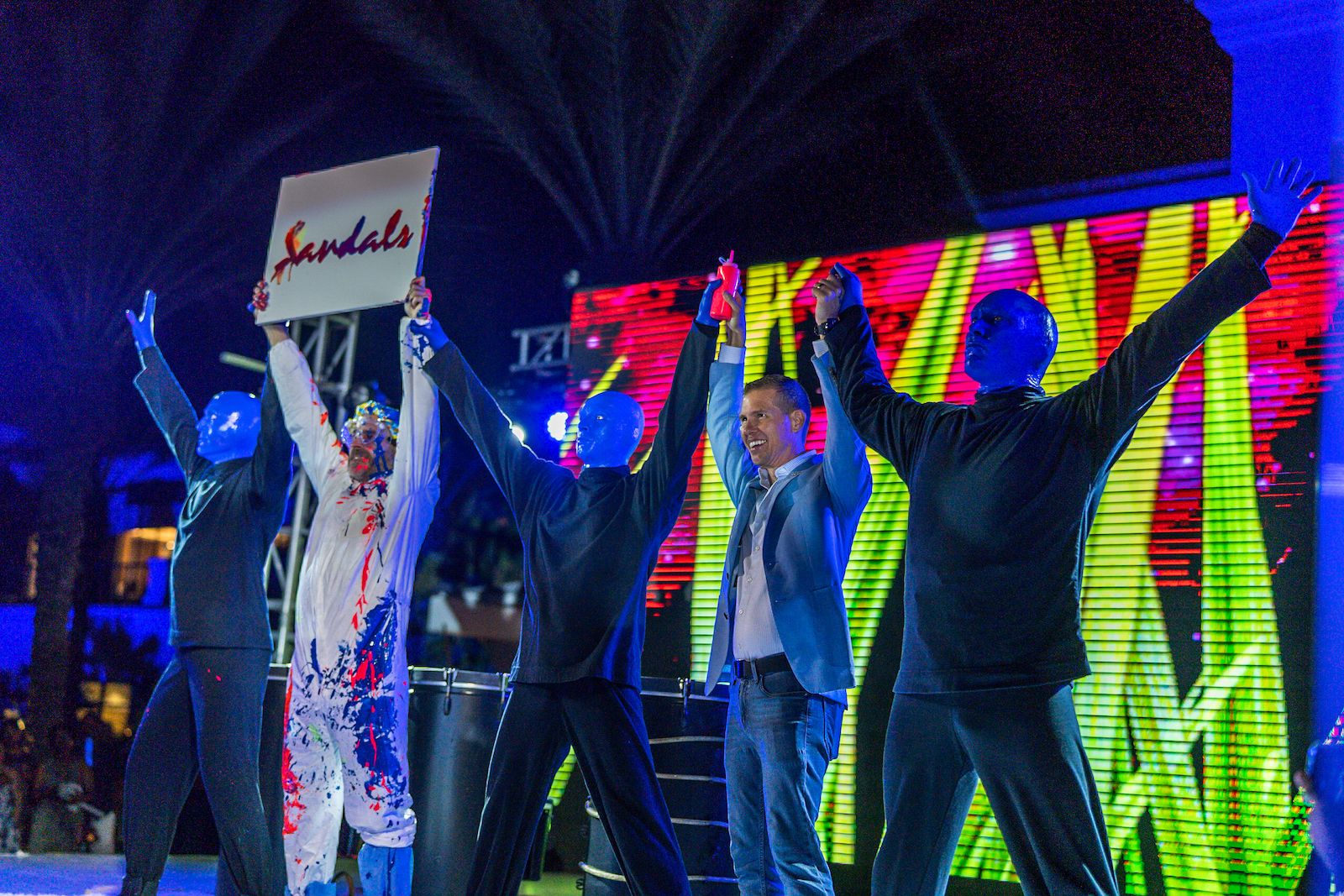 Jasmin van Eeden performed a stirring operatic number in sync with a spectacular fireworks show. All of it real and raw, celebratory and culturally relevant. 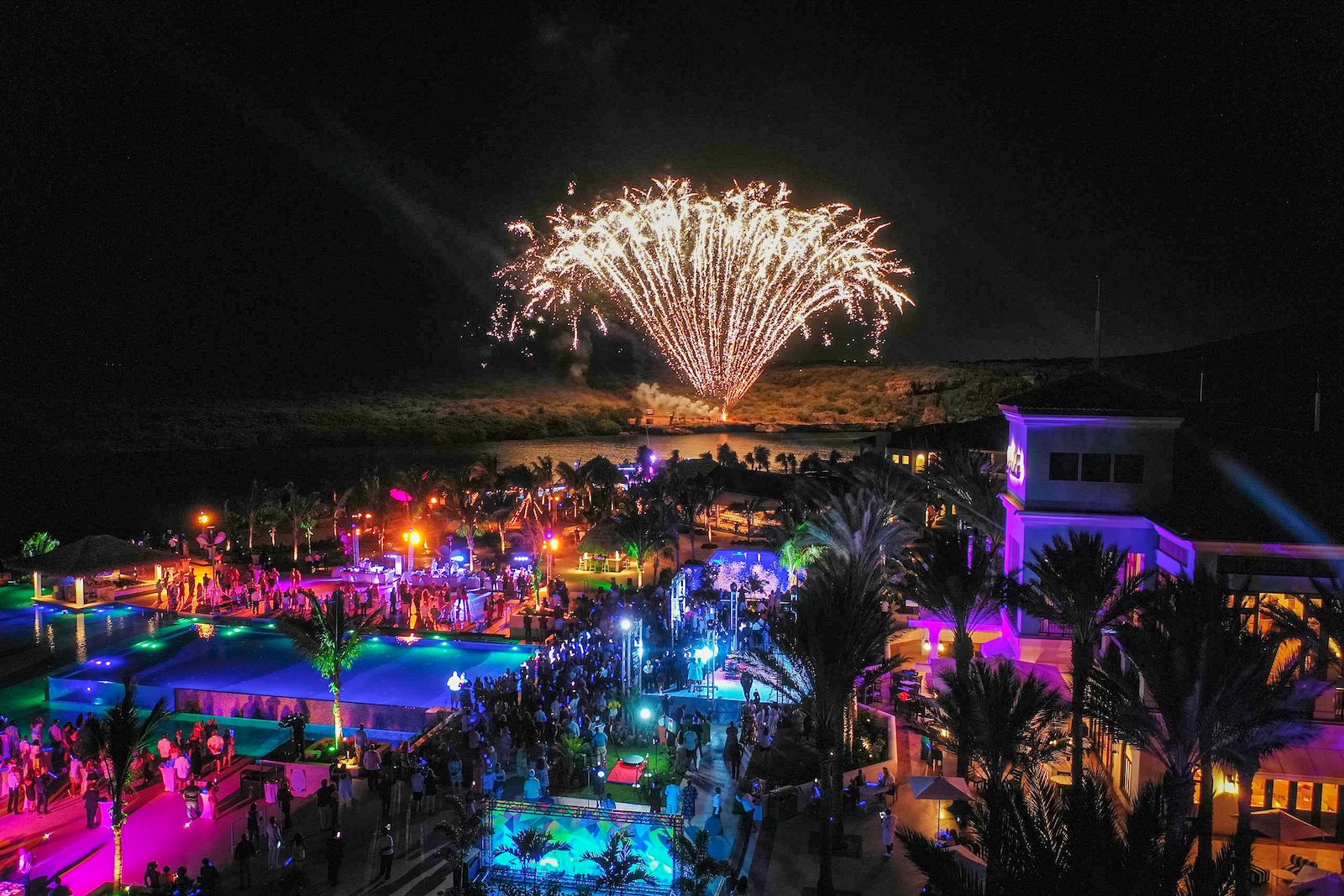 Pictured: Fireworks lighting up the night sky at the memorable event.


An even more extravagant affair, Carnival made its grand return to Curaçao for the very first time since 2019, choreographed by the award-winning Dushi Aventura with a kaleidoscopic, parade of close to 100 drummers, dancers, stilt walkers and iconic front line costumes, all handmade especially for Sandals Royal Curaçao’s grand opening. An appearance by Raynor “Raey” Lauffer, known as the Tumba King, authenticated the performance as an official event of Carnival with his winning Tumba song. In true Carnival fashion, the parade was followed by the dynamic brass band, Percussion Creative Dynasty. 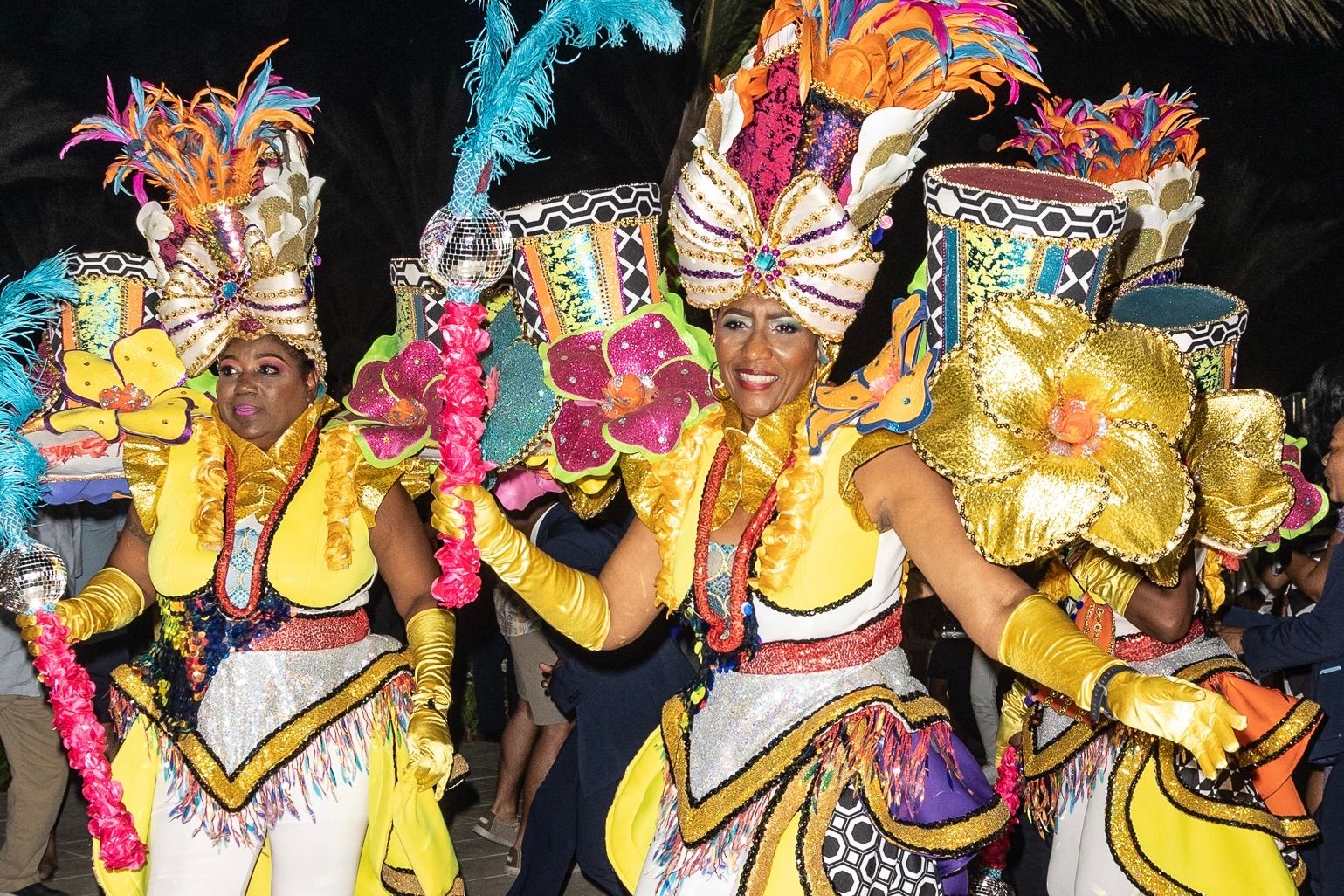 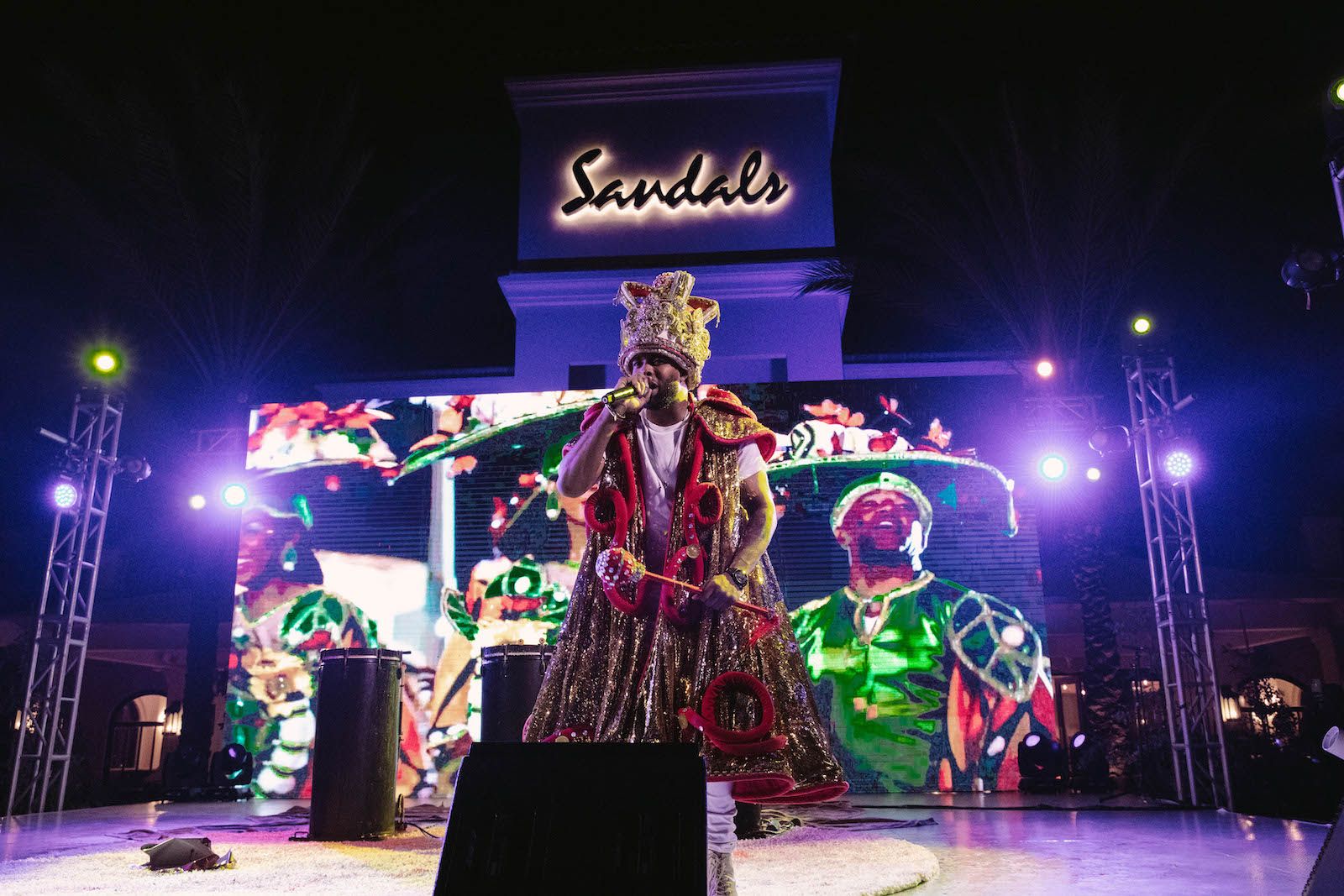 
Blue Curaçao flowed freely from the bars surrounding the Dos Awa Infinity Pool straight to the Decade Disco and Dessert After Party at the Beach Club. Because where else would you want to hear the vibrant music from Grammy Award-winning DJ Tracy Young, while also sensing the calming sounds of the sea 10 steps away? And on the beach, the dancing lasted longer than it does at most wedding parties. A good party does that to people, especially when the feet are in talc-smooth sand. 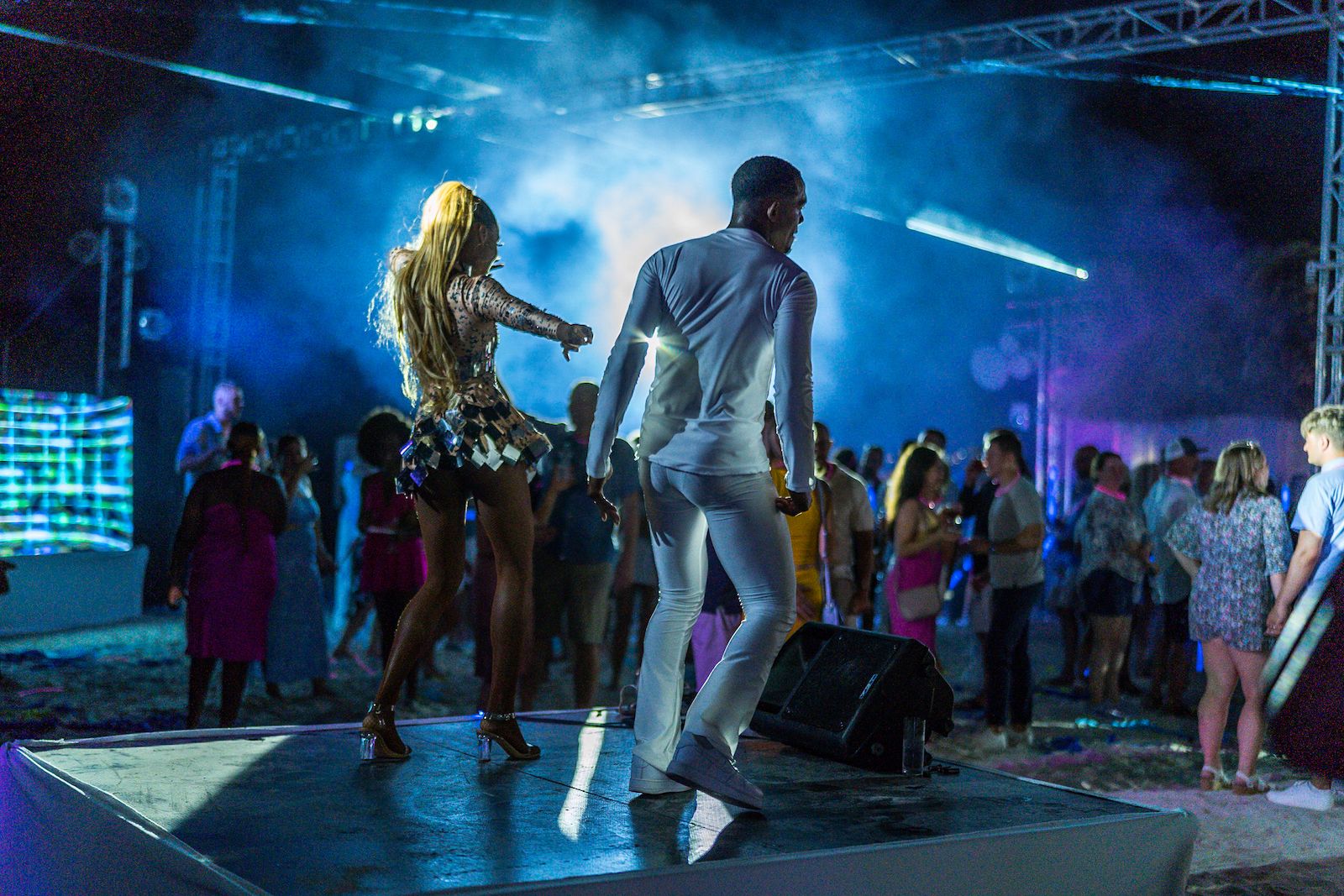 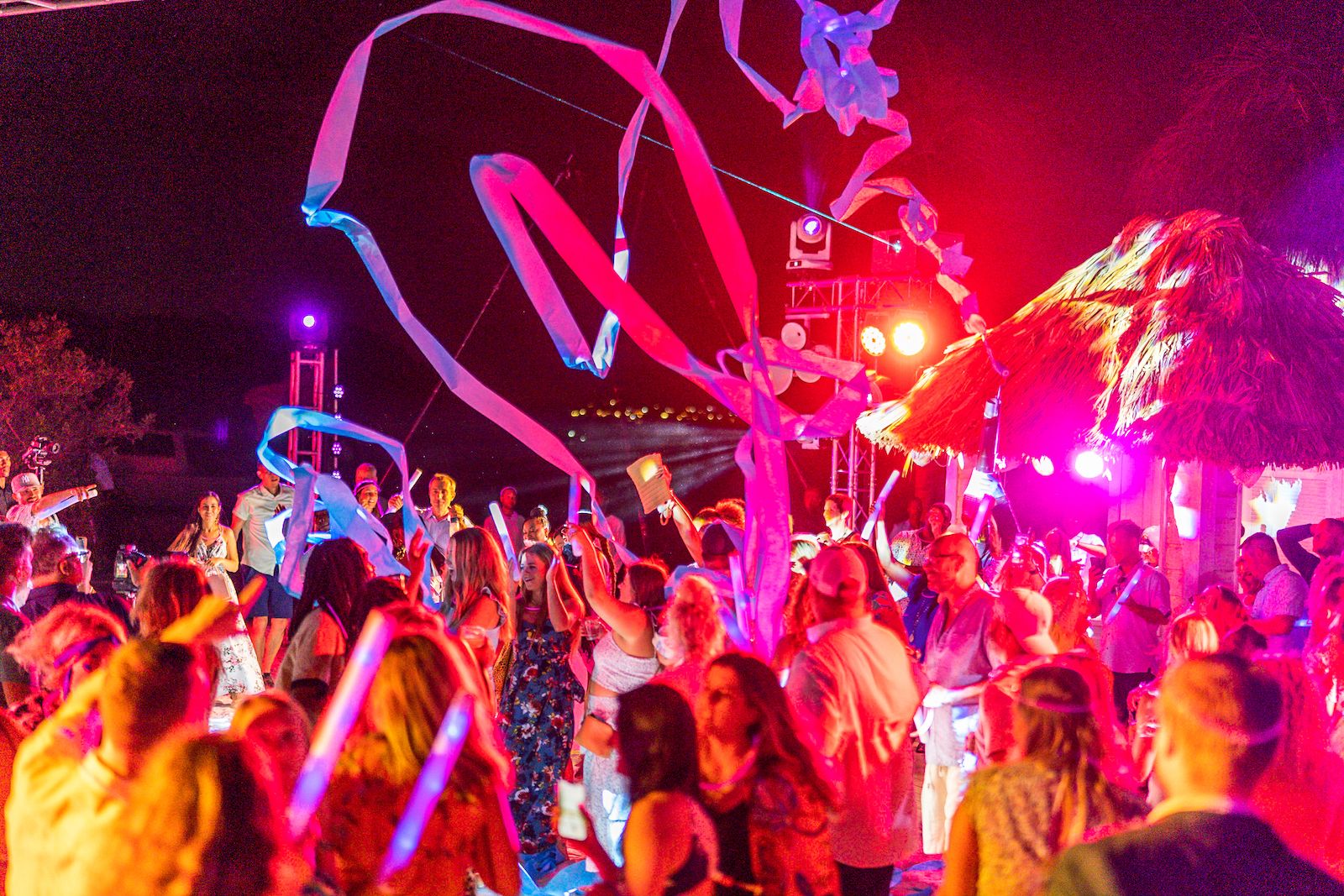 
With any celebration comes the post-celebration. At Sandals Royal Curaçao, that meant the sun came up the next morning and lit up the colors of the sea. It provided the perfect backdrop for the stage that had been reset for yet another landmark occasion. Two visionaries, Stewart and Herman, stepped up to announce the unveiling of the new “Anniversary Collection” Team Member uniforms, a project that the legendary designer began more than a year ago. 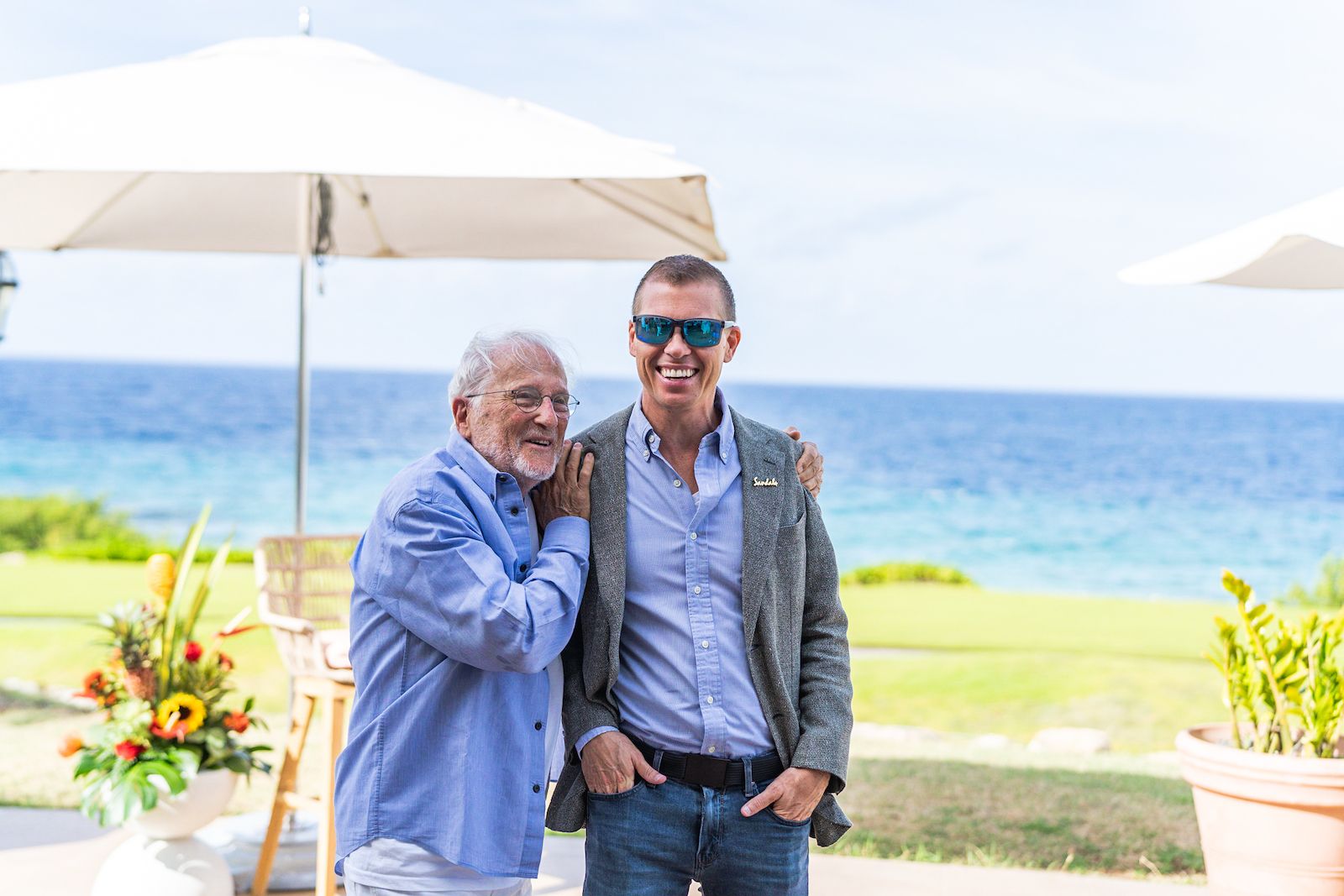 
For Sandals, the new look is another bridge connecting the company’s 40-year legacy with a look forward. 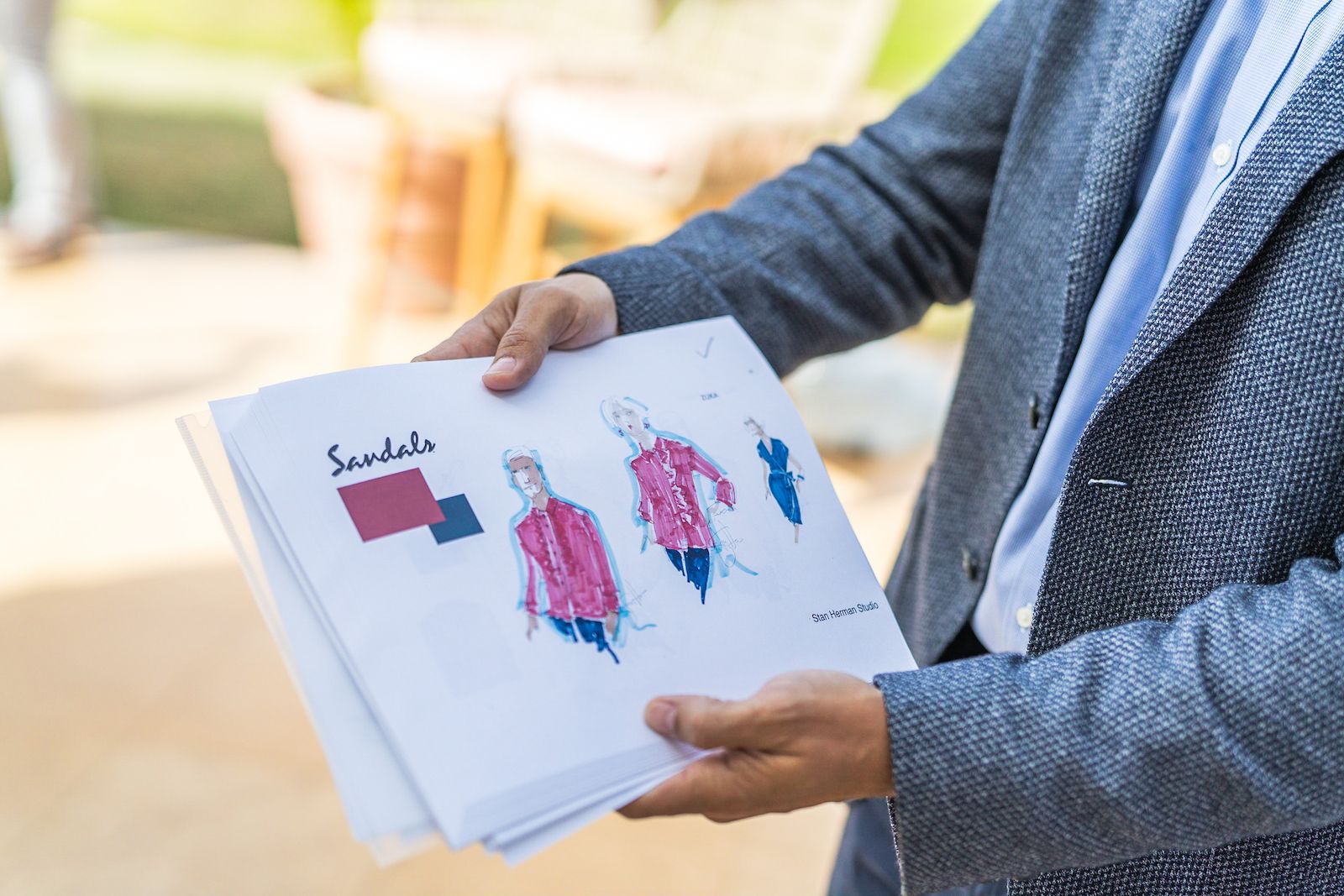 
There, directly in front of the ocean, butlers and servers and hostesses and welcome staff took to the catwalk wearing the soft hues of the island shades. Looking proud, engaging, and above all, happy — as if wearing Curaçao on their shoulders and hips. 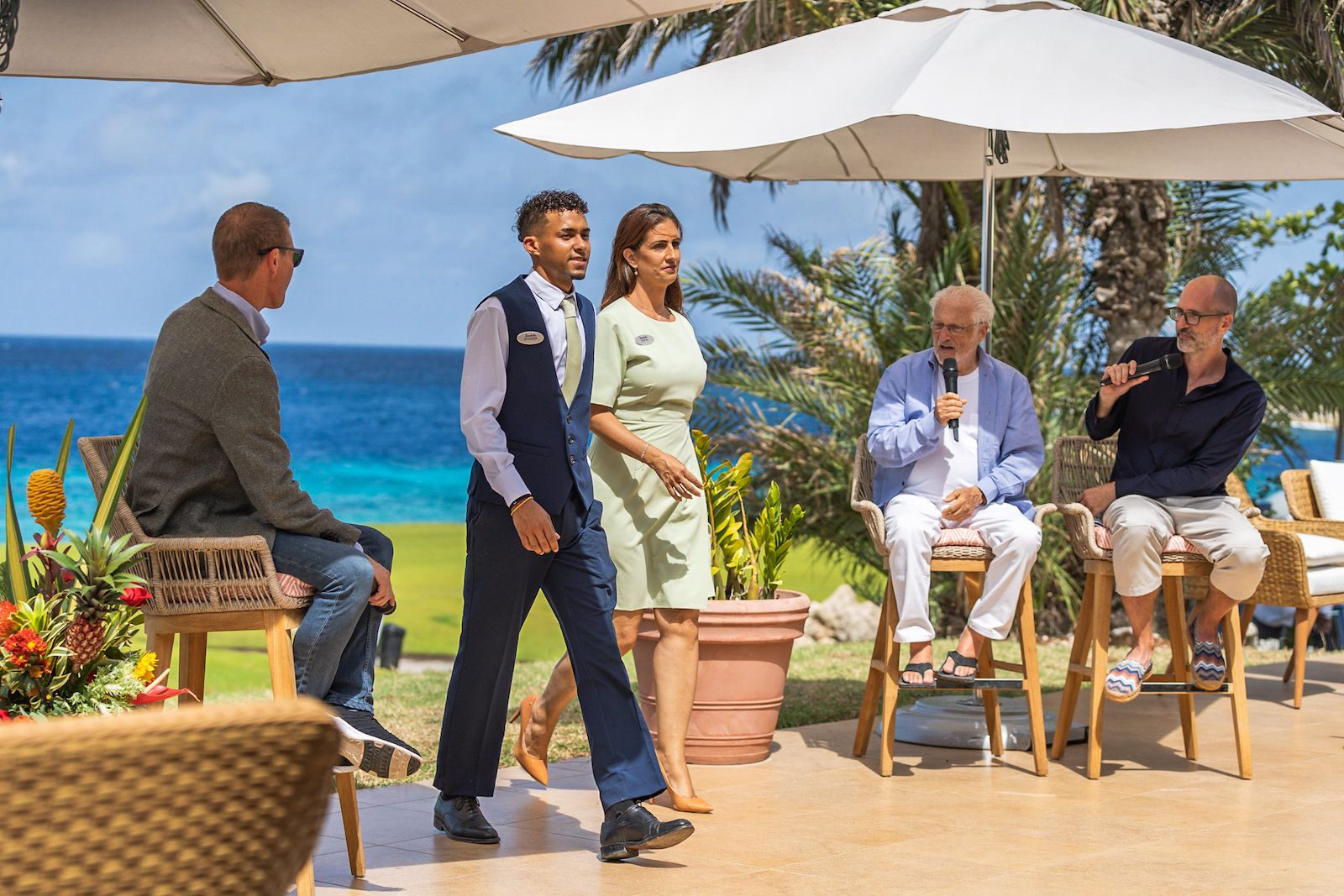 
This is how the bar is raised by a mile. In re-thinking luxury, Sandals also enhances what nature has provided, like the beautiful views and warm culture. You embed them into the entire guest experience. 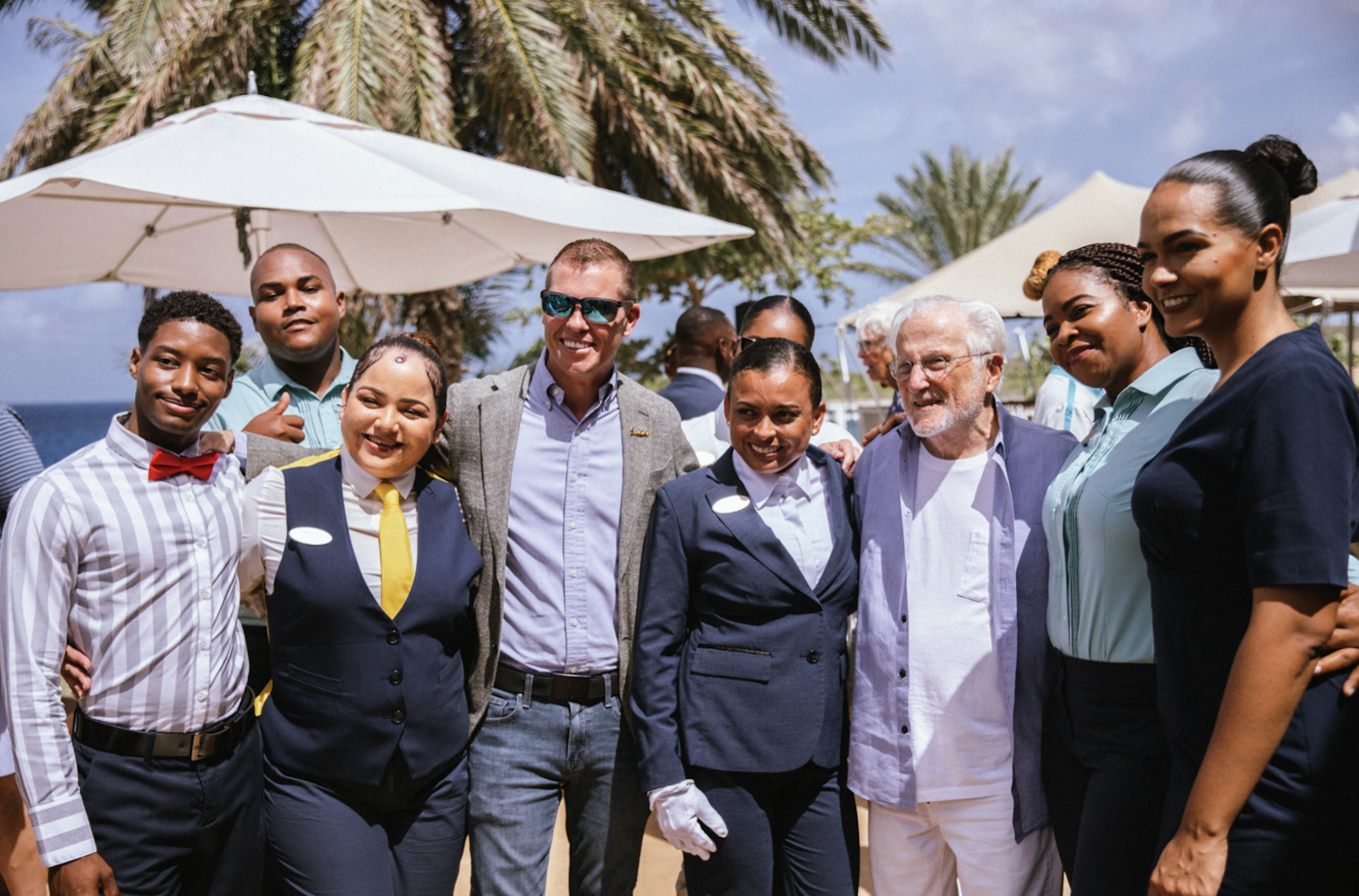 
At this moment, the beach at Sandals Royal Curaçao is open and warm. It’s a stage all by itself. The view from the incredible Dos Awa Infinity Pool will never change. The joy and energy from the grand opening does not disappear. It increases.

In his comments on opening night, Stewart mentioned something else without any prompting or preparation: “We are excited to give you a glimpse into the future of Sandals Resorts.”

The celebration started on June 24th, but as it is with the rising and setting of the sun, the celebration of living has no boundaries. So, for guests at Sandals Royal Curaçao, the time of your life is just beginning. 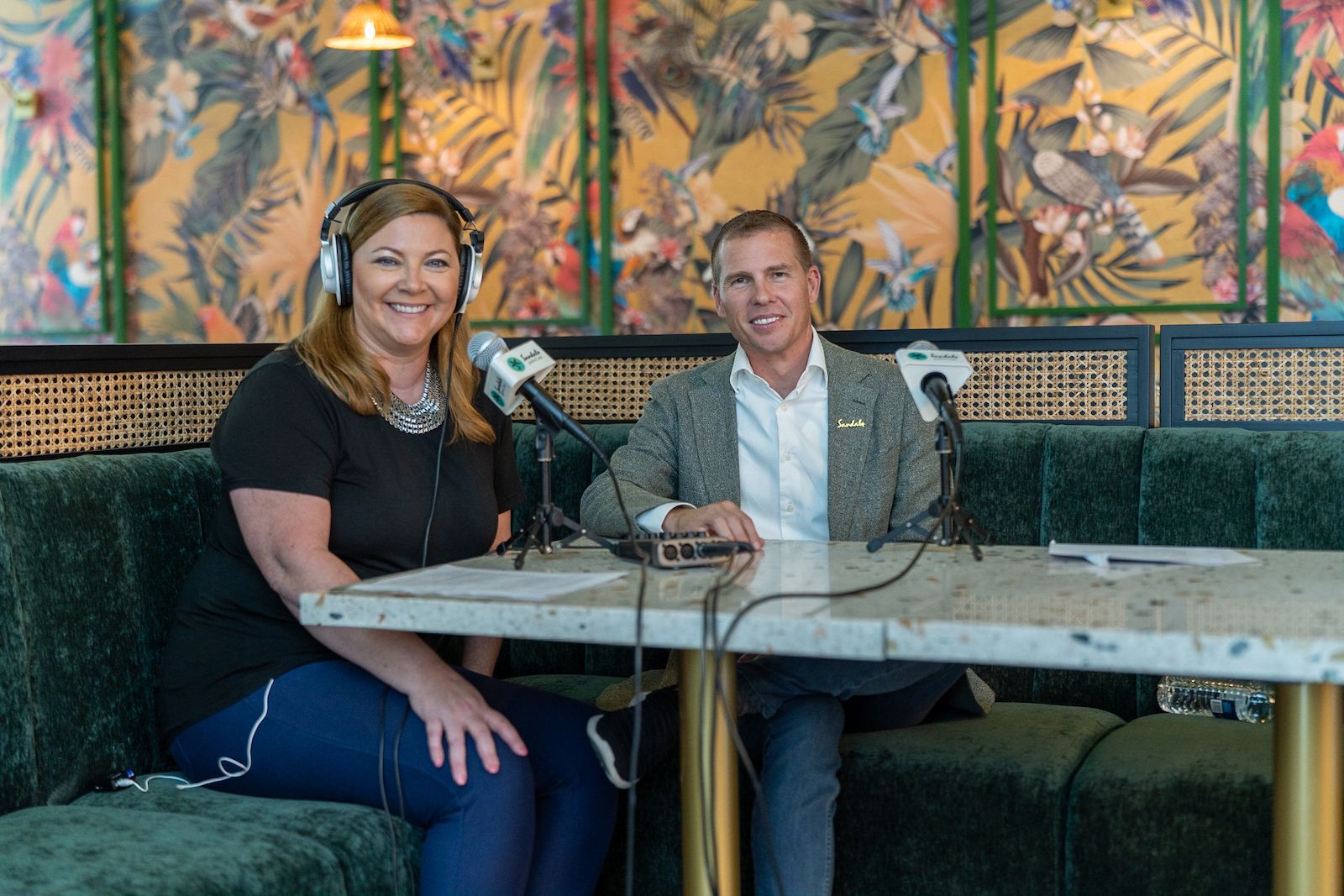