Pigeon Island is one of the most vibrant and beautiful points of interest in Saint Lucia. It is truly an historic area that has changed in significant ways over the years. Pigeon Island was once just that; an island, until it was later connected to the northern portion of Saint Lucia in 1971, via a causeway.

In this article you will discover that the events that preceded the development of the causeway, and of Pigeon Island, are so significant that they are part of the local curriculum of most history students in St. Lucia.

Whether you set foot on Saint Lucia or not, you might catch wind of tales of the battle for the island’s heart – seven times British, seven times French. Events that are so engrained in the culture that the English and Creole speaking locals won’t let you forget them. Just a brief look back at the history of the island proves just how important the area was to both the French and the British, during their individual rules.

According to the Saint Lucia National Trust, the non-profit-organization that is responsible for the upkeep of the Pigeon Island National Landmark, ‘it is a vivid representation of the cultural and historical monuments of international, civil, military and cross currents, characteristics of West Indian cultural change,’ – simple words to underscore the extent to which a brutal history, somehow transmuted into something that can now be treasured, forever shapes the identity of the island. 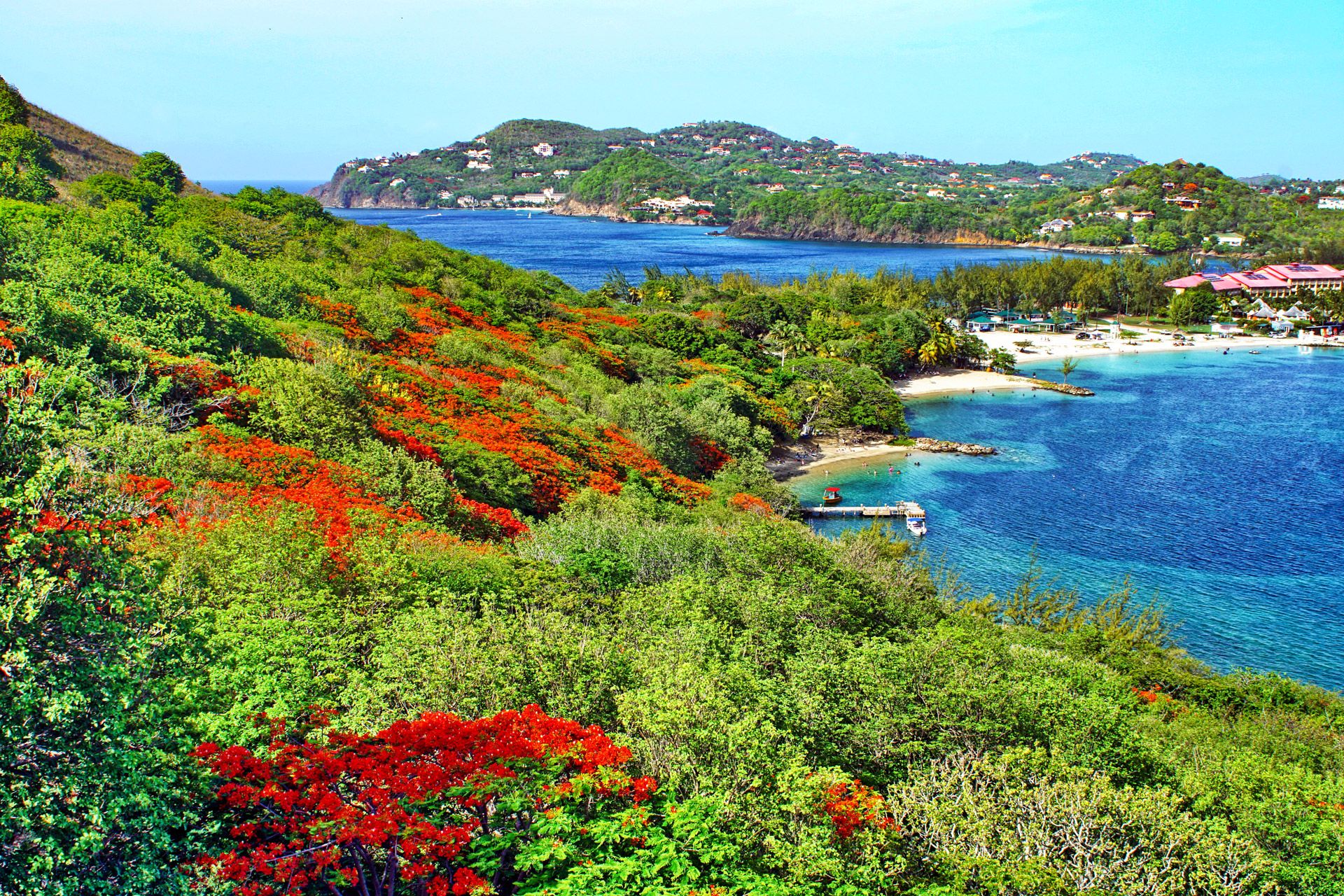 Pigeon Island, like many other parts of Saint Lucia and some other islands of the Caribbean, was first inhabited by the Amerindians; the Caribs and the Arawaks. The Caribs, who had a history of being that much fiercer than the Arawaks, had a bigger presence. Sometime later pirates also materialized on the island, notably a captain known as ‘Jambe de Bois’, whose real name was Francois Le Clerc. His name literally translated to peg leg, and all because he walked around on a wooden leg. He conducted many attacks and raids in the Caribbean, and beyond. Jambe de Bois and his crew of 330 men were the first Europeans to establish their presence and settle into the island of Saint Lucia. Pigeon Island for them was home, and they used it to target Spanish ships.

Jambe du Bois wasn’t the only one to take advantage of the clear views from Pigeon Island, which made it a great watch location. Several Forts were built in the area and operated by both the French and the British. The British, during initial take overs of the island used a heavily fortified Pigeon Island to spy on the French in Martinique. Admiral Rodney was famous for doing this and would often monitor Fort Royal, and the French naval base in Martinique from this location. Still today evidence that this happened can be seen, particularly on days when it is clear enough to easily spot the island of Martinique from Pigeon Island.

In this article on the Sandals Blog: 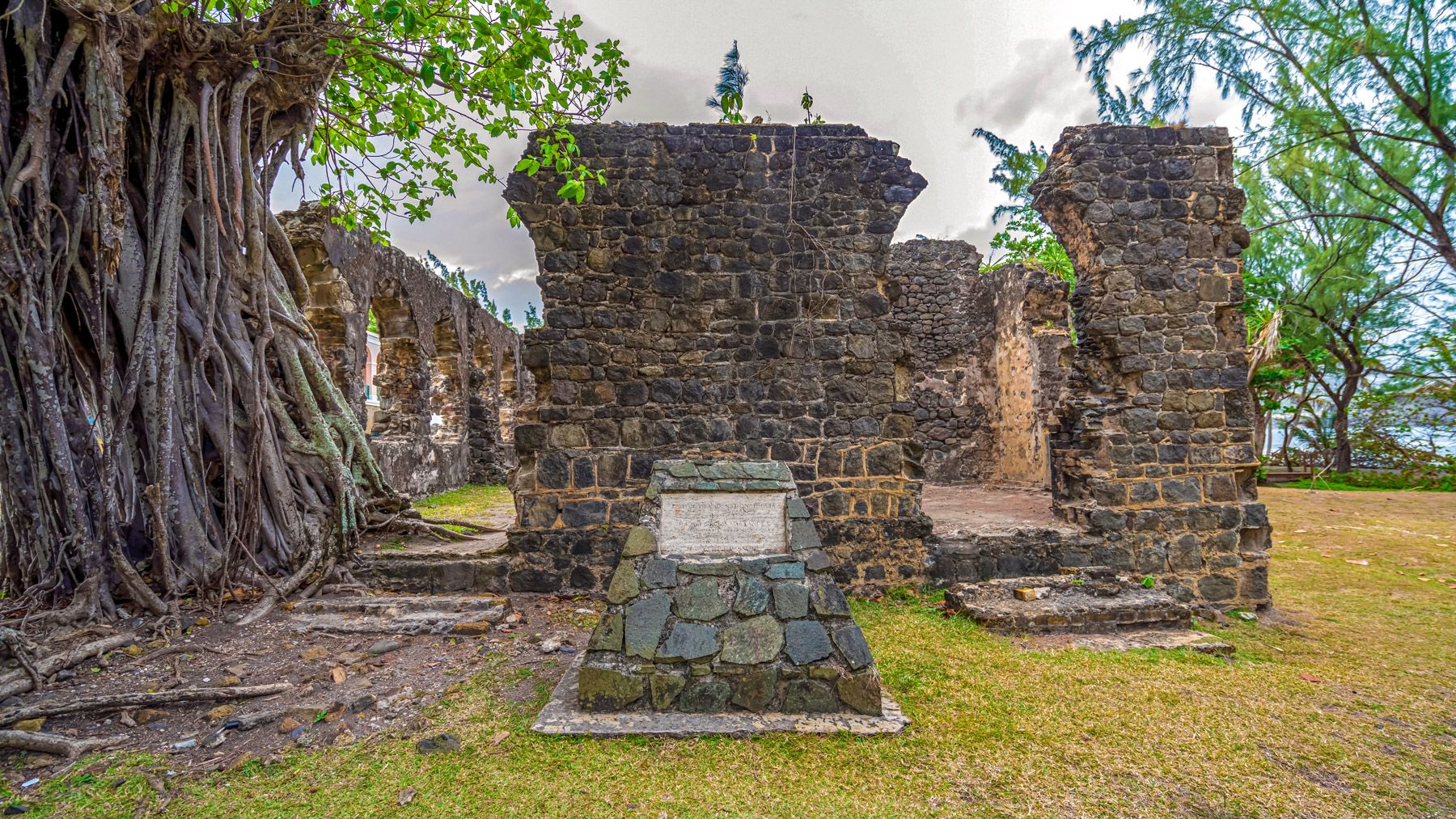 In the 18th century, George Rodney, a British Admiral changed the face of Pigeon Island by building forts, which served to protect him and his army from enemy attacks. One of these was Fort Rodney, constructed in 1778. Fort Rodney was built on the smaller of two peaks located within the Pigeon Island National Landmark. This and other forts in the area (including Signal Hill) afforded the British firsthand information on whomever was approaching the island. Fort Rodney, was a top-rated fortification during times of war, and today many old cannons and other ruins remain, adding color to historical accounts. At one point, the Admiral ordered all trees on Pigeon Island to be cut down, for a better vantage, but today you won’t be able to tell at all. The area is lush, green, and simply magical. 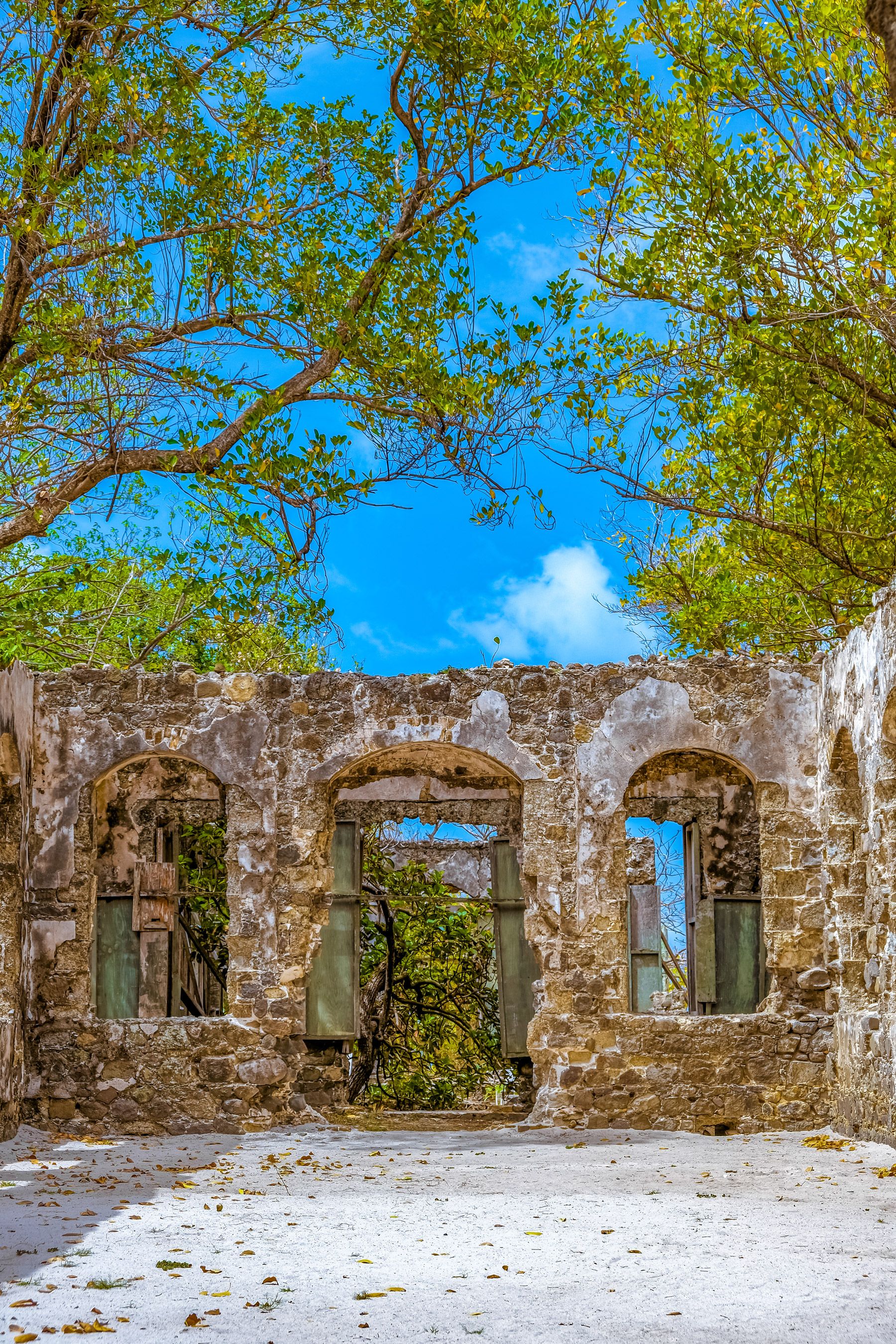 With the Caribbean Sea on one side, and the Atlantic Ocean on the other, Pigeon Island has served many uses over the years, including being a venue for the Saint Lucia Jazz Festival. The showcase with international flair has featured many mega stars on its lineup, including Rihanna, UB40, Neyo, John Legend, The Jacksons, Mary J Blige, Elton John, and more. The Saint Lucia Jazz Festival is now part of a larger product in Saint Lucia which incorporates several festivals including the Roots & Soul Festival (Reggae), and Saint Lucia Carnival held annually in July. Saint Lucia Jazz is one of many events held in Pigeon Island National Park annually. Even during while these events are packed with entertainment, the focus is often on just how beautiful the area is, and despite small upgrades, its ambiance remains pure.

Things to do at Pigeon Island 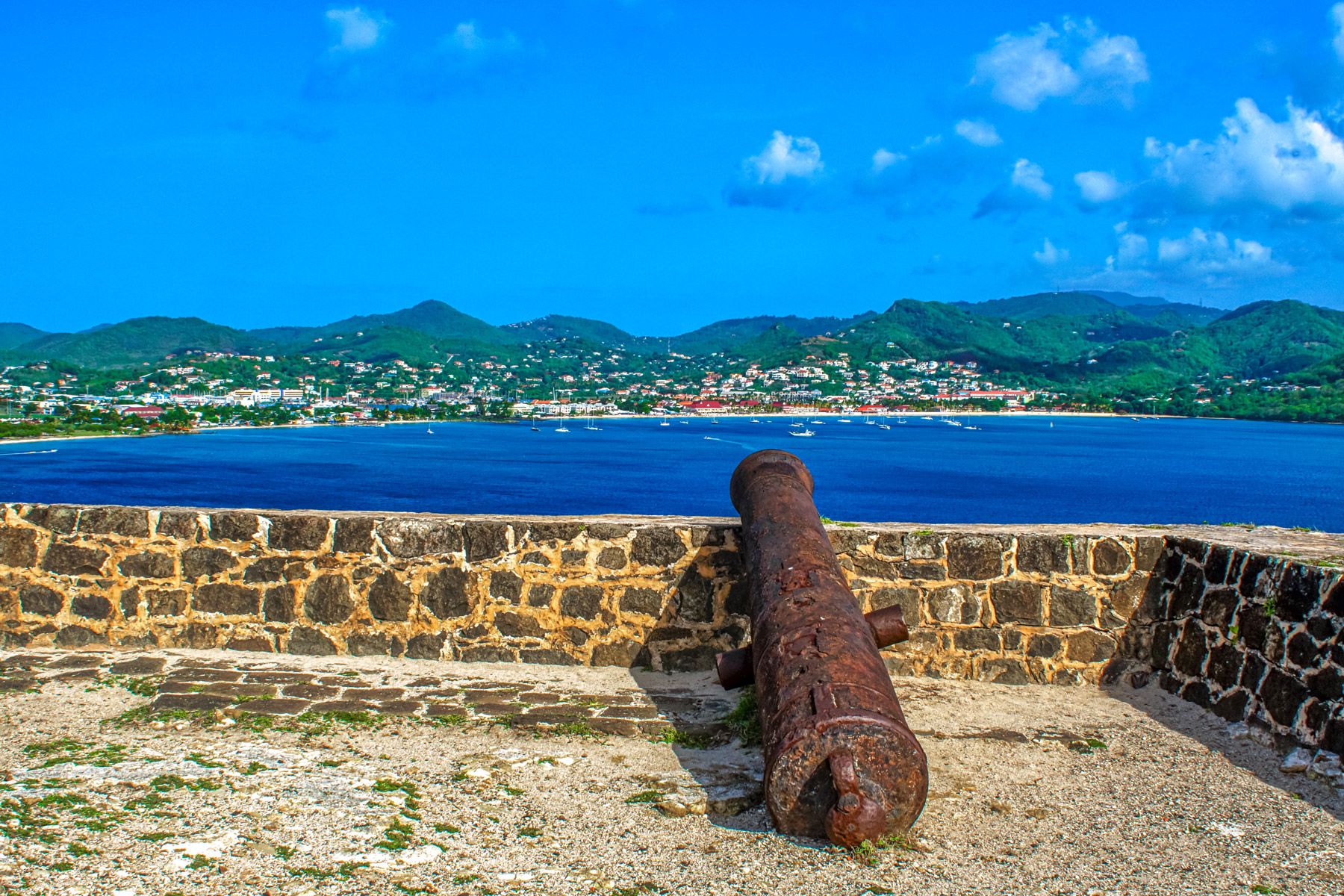 ‘Ruins’ isn’t a bad word where Pigeon Island is concerned. Everyone from hikers to newlyweds enjoy this slice of paradise, in and out of the park. If you’re into hiking, you can hike one or both peaks located within the park. Fort Rodney is 225 feet high, while Signal Peak reaches 330 feet. It’s a little challenging to get to the top, but it doesn’t measure up to some of the more difficult climbs in Saint Lucia, like the Gros Piton or Petit Piton climb. To get to Signal Peak’s highest point, you’ll have to climb a tall ladder, which is relatively easy to do. The ocean breeze and the amazing view from the top are simply heavenly! 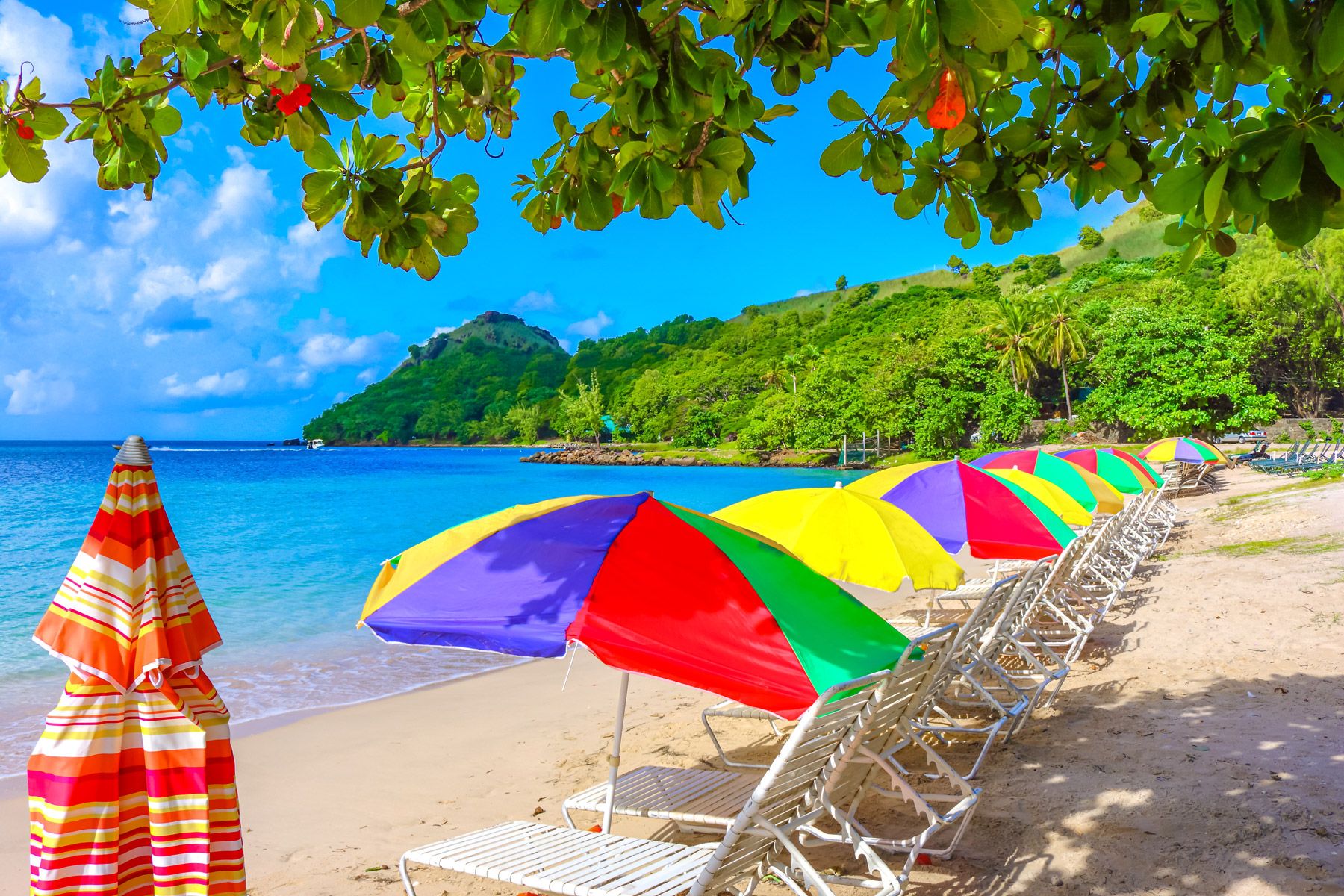 While there are many bays in the general Pigeon Point area, in the park you’ll find two relatively secluded ones. If you go midweek, on a day when there are no cruise ships in port, you’ll find the beaches almost deserted. On other days, you won’t be able to find a spot. The water is clear, and the sand is white and well kept. There are even bathroom facilities. Beaches within the park are popular for picnics, snorkeling, and snuba tours.

Pigeon Island, particularly the Pigeon island National Park, is a popular wedding site. Locals and visitors alike find that they get their money’s worth when deciding to exchange vows there as the site is peaceful, beautiful, and historic. What more could a person ask for to set the tone for their happily-ever-after?

Expert Tip: After the ceremony, make some time for photos in the Ruins! 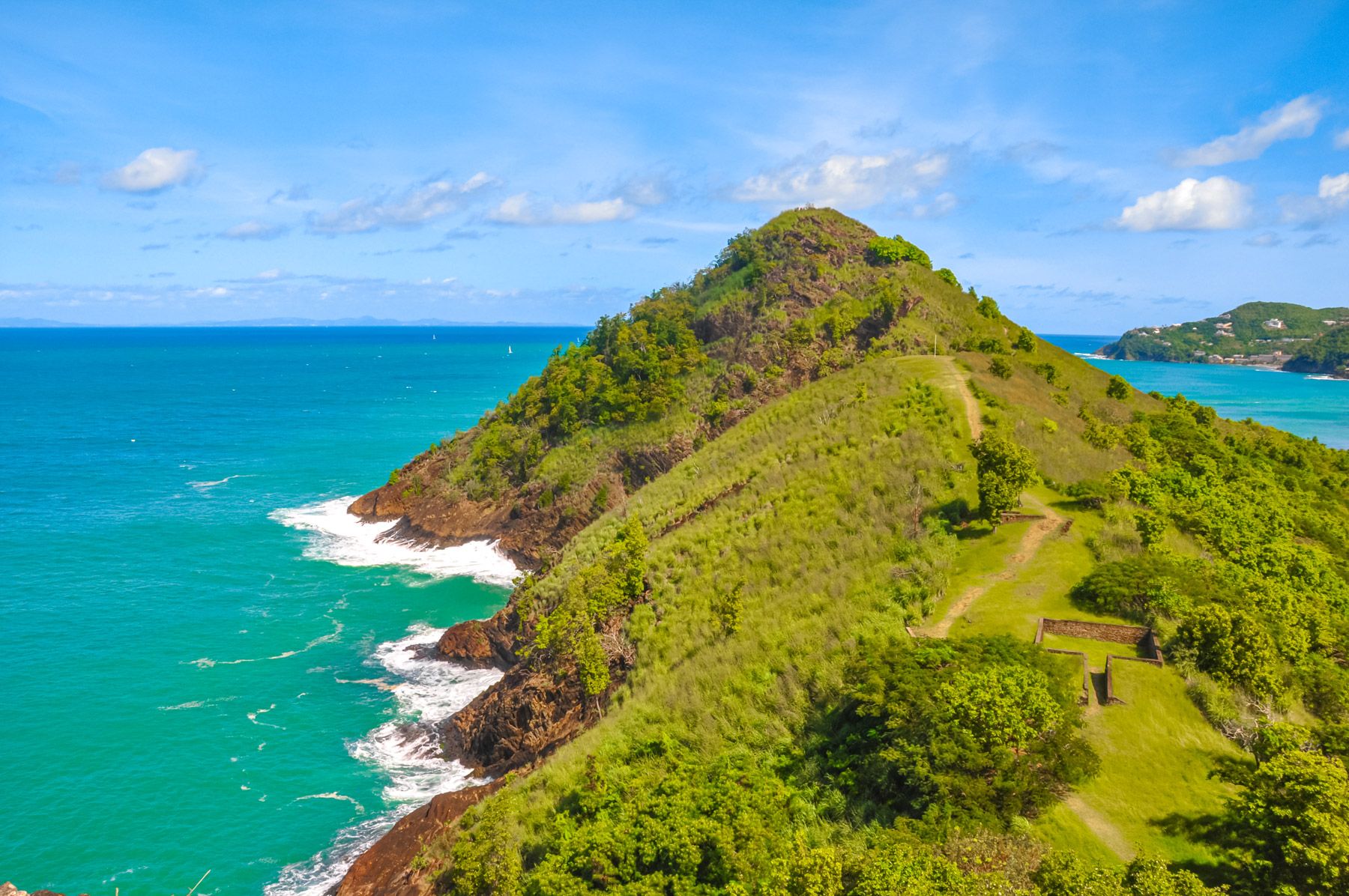 Nature lovers will enjoy what the Park has to offer on the inside – 44 beautiful acres of protected greenery, packed with history, waiting to be explored. Pigeon Island makes for a great half or full day outing.

5. Dine with family and friends.

For a great location with delectable meals, check out the Barnacles restaurant located within the Pigeon Island National Park. It’s private, has an exclusive feel, and the food and service make a stop here well worthwhile! 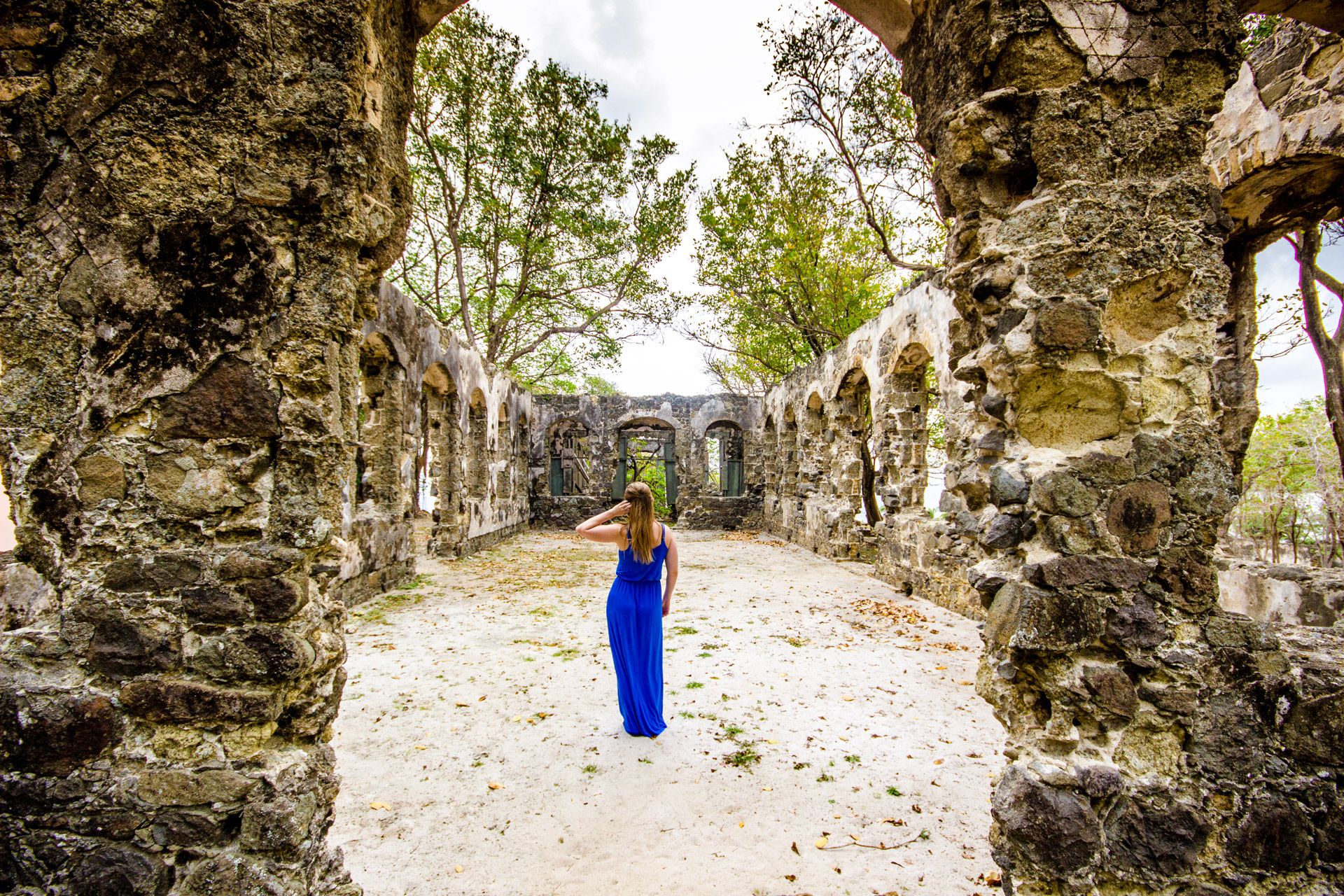 From beachside views, to ancient ruins and grassy slope lands, you’ll find just the right backdrop for your vacation photos at the park. There are bathrooms for outfit changes, and showers for freshening up.

7. Check out nearby locations 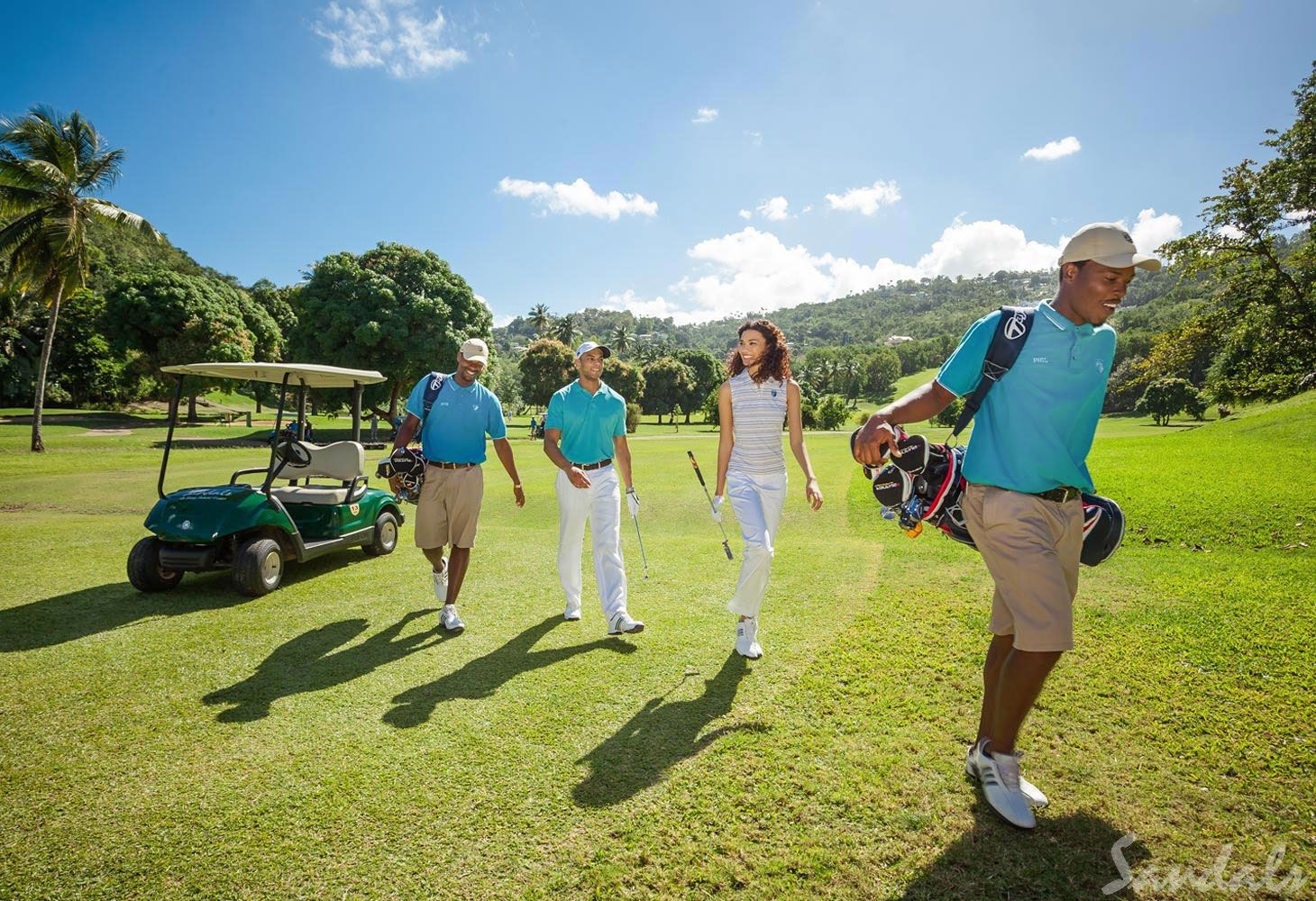 The Sandals Golf and Country Club is a short distance away from Pigeon Island, and it is the perfect place to hone your game. Grab your gear (or rent) and get ready for some action at one of the most popular golf courses in the Caribbean. This site is up to international standards, and you’ll spend a great day out on the green.

When can I go to Pigeon Point Beach?

Pigeon Point beach is accessible year-round. The beach is particularly hopping on weekends, with beach parties and local bars in full swing. You’ll find a quieter experience inside the park. 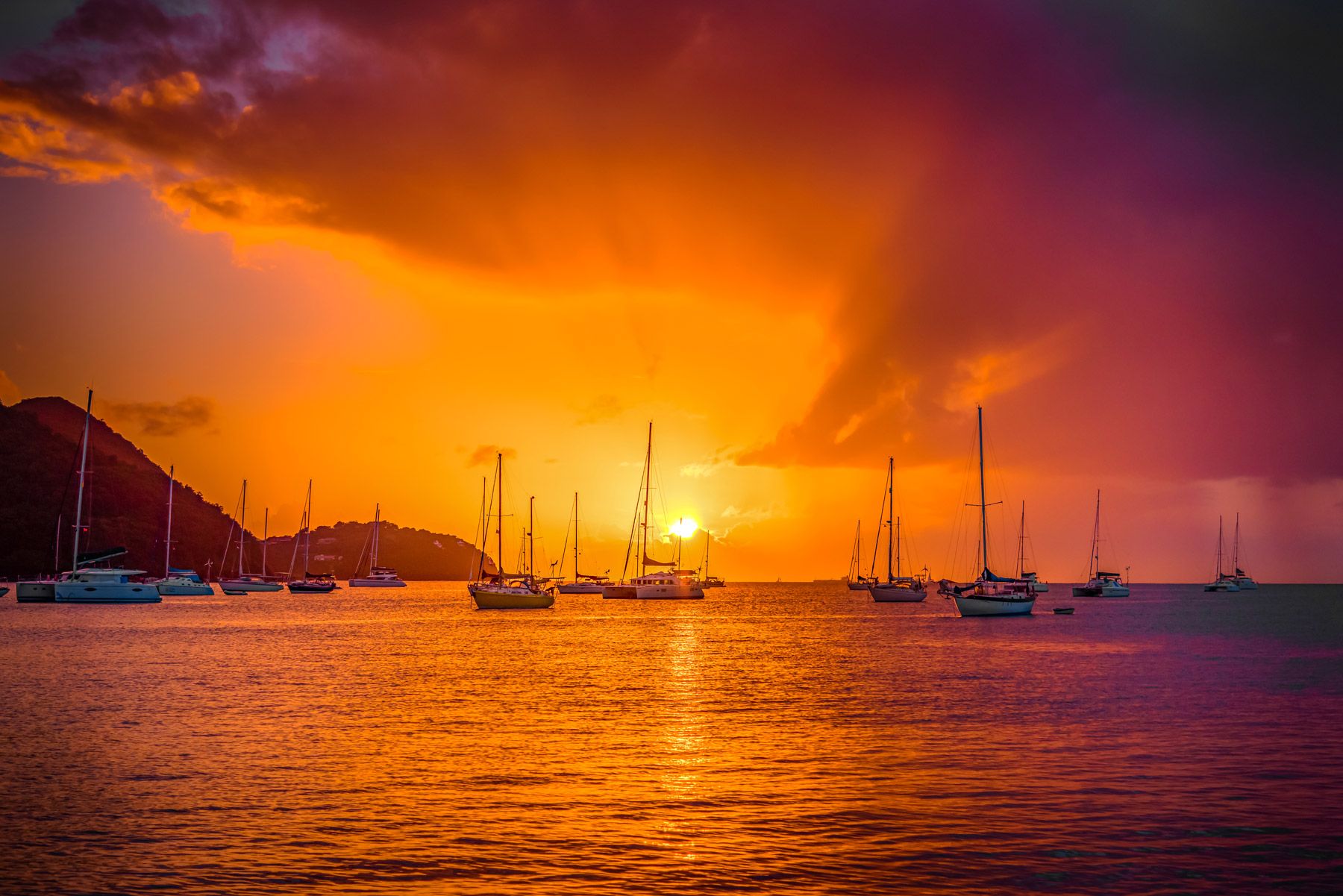 Views from Signal Point at the Pigeon Island National Park are amazing – on clear days you can see the Pitons in the south of the island, and the island of Martinique, which is located a short distance away from Saint Lucia. There are also views of Rodney Bay and Gros Islet from some areas of the park. 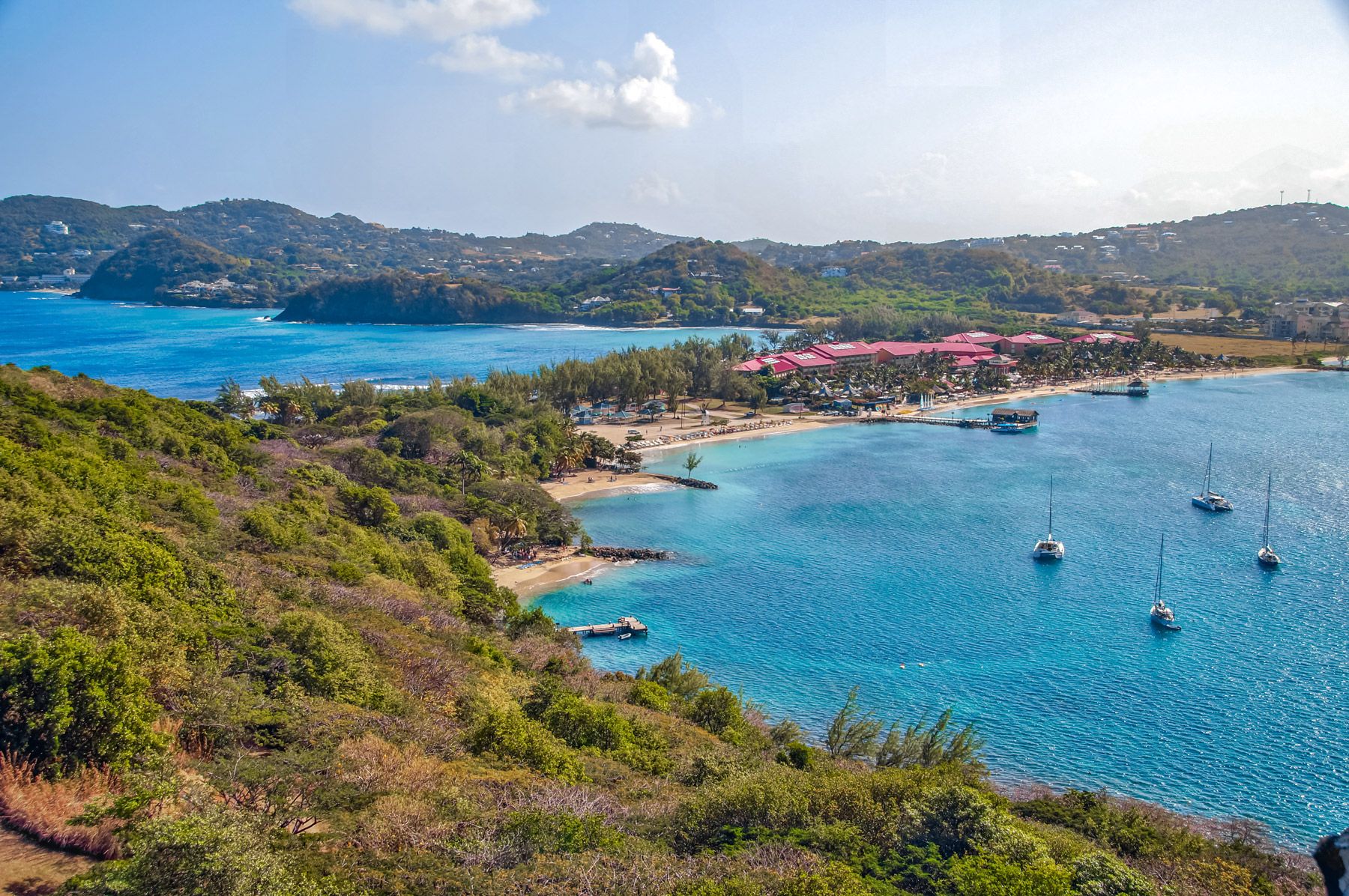 What kind of visitor is this point of interest good for?

The adventurous. The Park is great for people who love to be outdoors, take photos, and hike.

How much does it cost to enter?

The entrance fee is $8, a private tour may cost more.

How much is a tour?

Tours cost around $58 – and this price usually includes the entrance fee, transport, lunch, and a walk around with a guide who will share the history and background of the site. 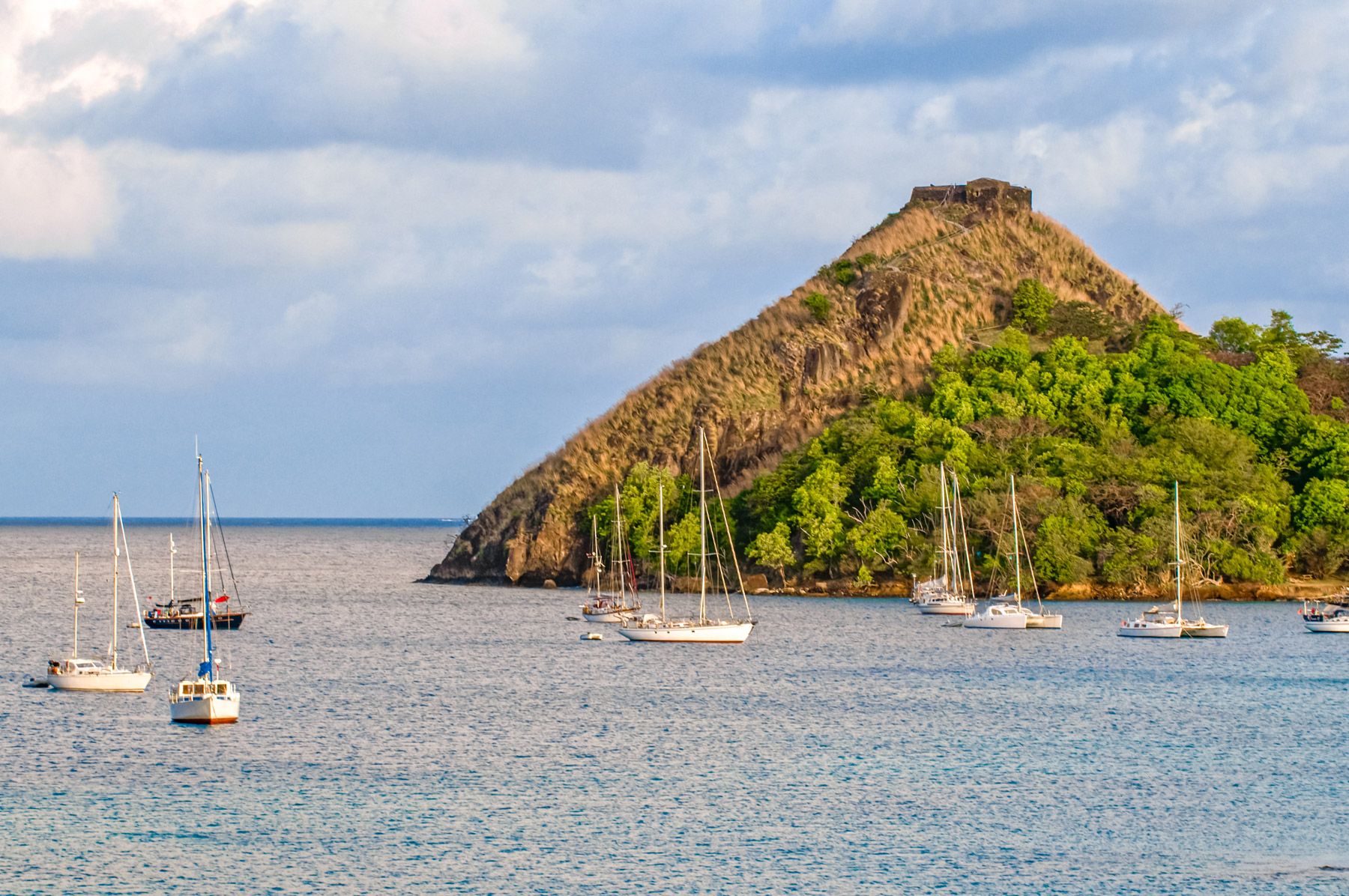 How do I get there?

You can get to Pigeon Island via boat (there’s a dock inside the park), or by car. If you’re driving, you’ll find the island about five minutes away past the road leading into the town of Gros Islet. Continue along the Gros Islet Highway in the direction of Cap Estate and take a left turn near the sign marking the entrance of Pigeon Island. Follow the road and take a right turn. At the end of that road, just past the Sandals Grande Saint Lucia Beach Resort & Spa, you’ll find the Pigeon Island National Landmark.

How far are Pigeon Island and Fort Rodney from the different Saint Lucia Sandals resorts? 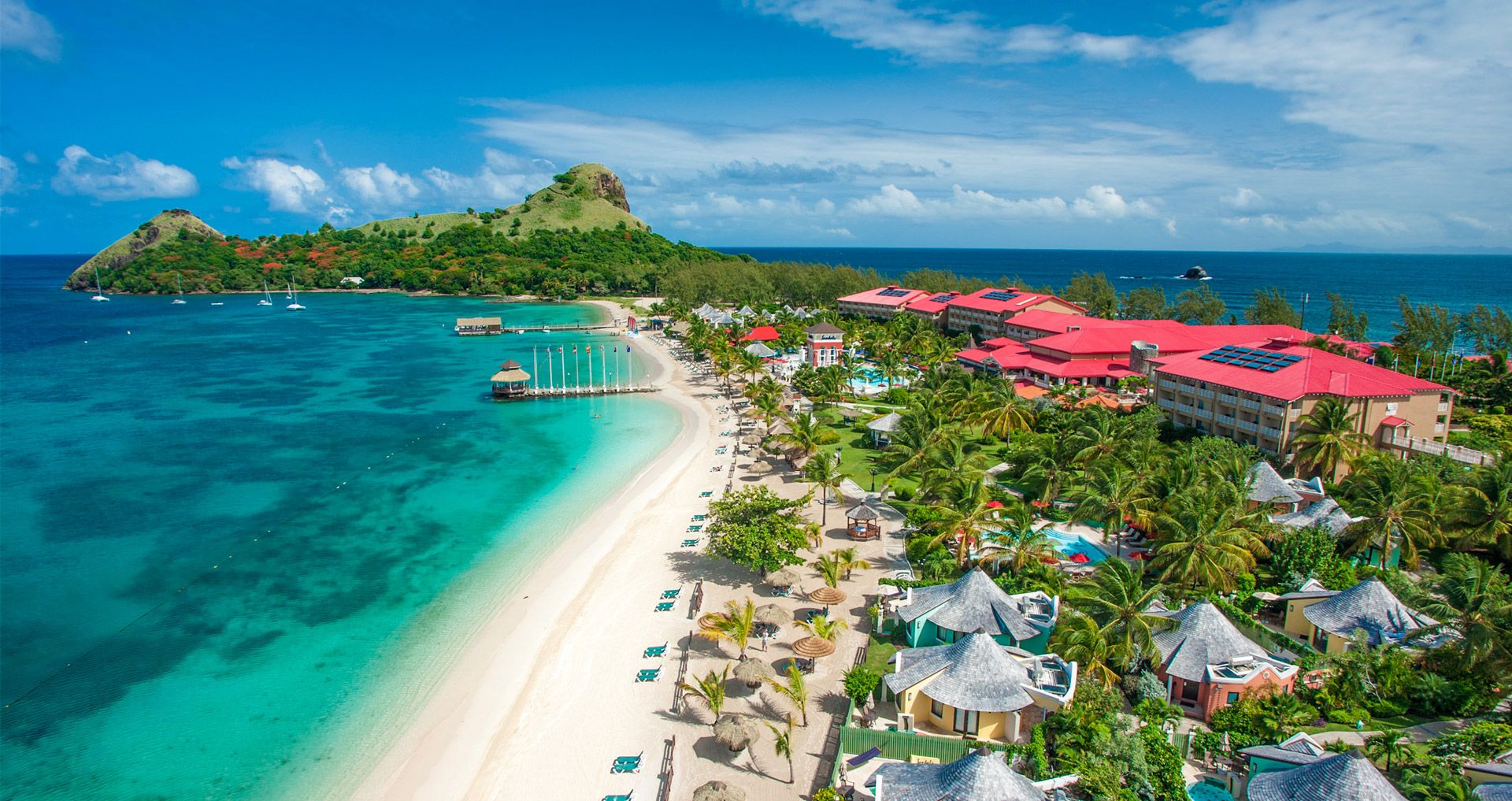 If you’re staying at any of the Sandals all-inclusive resorts in Saint Lucia, the Pigeon Island National landmark is not too far away. It is a breezy five-minute walk away from the Sandals Grande Saint Lucia Beach Resort & Spa. It is only 0.5miles/2.6km from the resort, a 2-minute drive. The Park is about 36 minutes from Sandals Regency La Toc, and about 20 minutes from Sandals Halcyon.

How long does it take to hike up to the fort and back down?

The hike up the Fort is relatively easy and takes about one hour and 15 minutes both ways (some steep areas exist along the paths). This does not include time spent taking photos or enjoying the views. You can stay as long as you’d like! 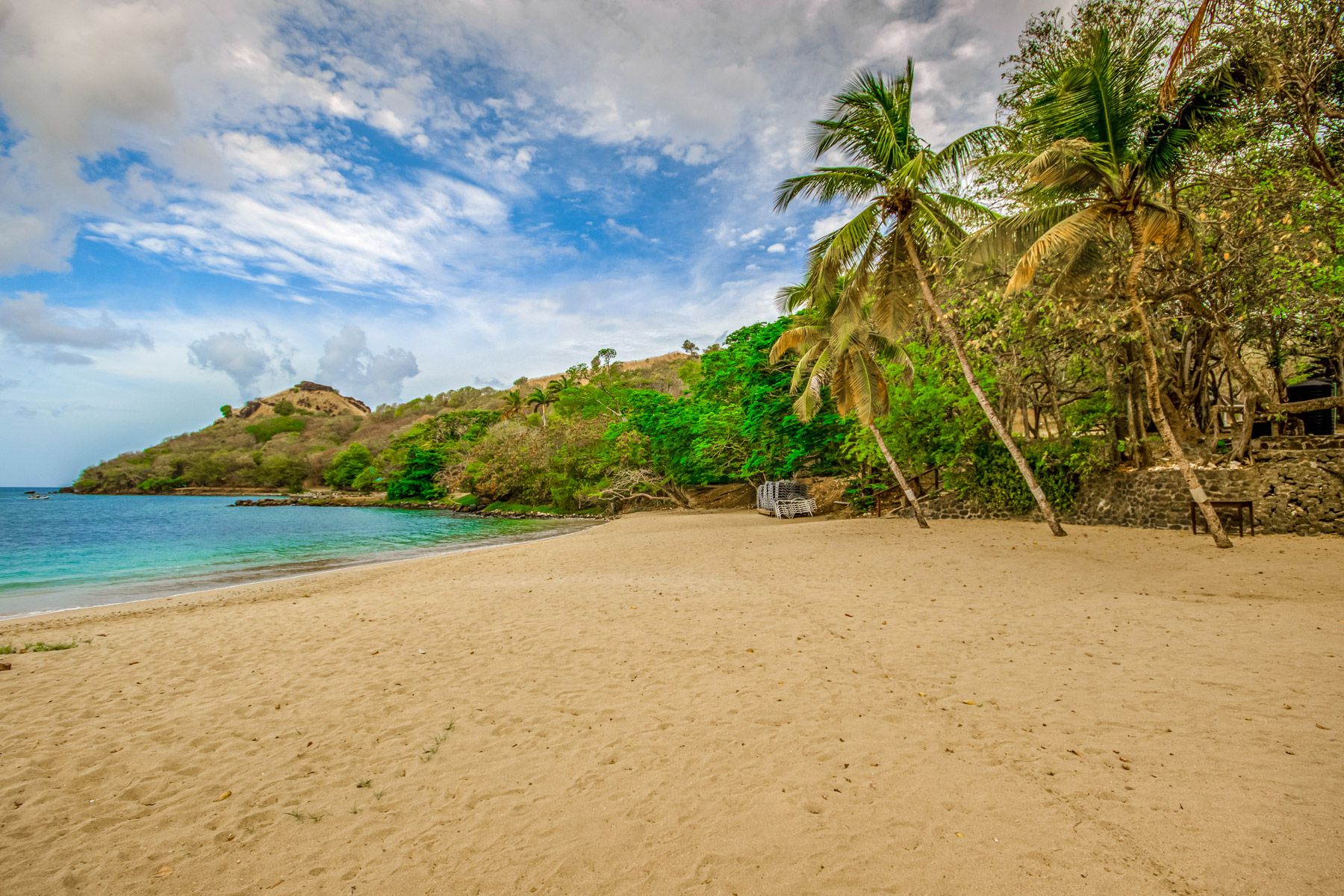 Pigeon Island is filled with charm and beauty…

And you’ll notice it from the minute you veer off the Gros Islet highway, just before driving into Cap Estate. You’ll will sense a shift in the atmosphere, and you will know you’re in the right place. The closer you get to the Pigeon Island National Landmark, the more pronounced the feeling becomes, and soon… you’ll find yourself engulfed in an environment of pure bliss. Go for yourself to experience this gem in Saint Lucia that is full of history and overflowing with opportunities for a laid-back (and super informative!) break from the norm.

30 Pictures That Will Make You Fall In Love With Jamaica

Is the Bahamas expensive compared to the US? A complete overview.

If you’ve got your heart set on a luxury vacation in an amazing Caribbean destination, the Bahamas just might be at the top of your list. That doesn’t mean however that the islands of this coral-based archipelago don’t cater to vi…

Enhance Your Experience With These Sandals Resorts Insider Tips & Tricks Sandals is an award-winning all-inclusive resort company dedicated to providing couples with an amazing time, while in the Caribbean. With a wide range o… 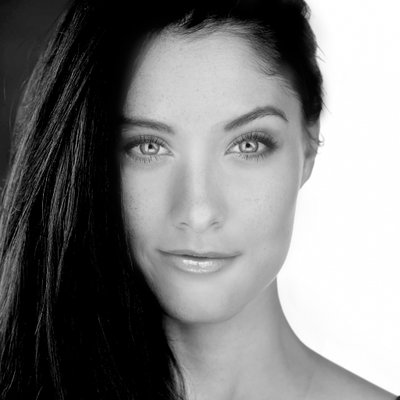 30 Pictures That Will Make You Fall In Love With Jamaica

Is the Bahamas expensive compared to the US? A complete overview.

If you’ve got your heart set on a luxury vacation in an amazing Caribbean destination, the Bahamas just might be at the top of your list. That doesn’t mean however that the islands of this coral-based archipelago don’t cater to vi…

Enhance Your Experience With These Sandals Resorts Insider Tips & Tricks Sandals is an award-winning all-inclusive resort company dedicated to providing couples with an amazing time, while in the Caribbean. With a wide range o…